The decision comes nearly a month after the unprecedented raid on the former President’s residence.

The August 8 raid shocked Republicans as the BlueAnon Resistance zealots cheered on the Biden regime’s targeting of his predecessor.

Concerns were raised almost immediately as there was no oversight over what was taken by the FBI in the hours-long raid.

On Friday, the chatter on Twitter was all about the FBI saying that a number of the folders marked “Classified” that they had seized were empty.

This can be spun one of two ways — the items that were in the folders were declassified or already returned, or that Trump is collaborating with the Russians. Guess which one the BlueAnons are going with?

After learning today that Trump had 43 EMPTY folders in his office that should have contained classified documents, the FBI and DHS are now searching, and seizing boxes from, the NY and FLA properties of Russian oligarch Victor Vekselberg. Coincidence? pic.twitter.com/QsHfZYOKjA

But it seems that the FBI was indeed overreaching in the documents that they seized.

BREAKING: A federal judge has granted a request by former President Donald Trump’s legal team to appoint a special master to review documents seized by the FBI during a search of his Florida home last month. https://t.co/3U3l5Cpnnn

From the Associated Press report:

A federal judge on Monday granted a request by former President Donald Trump’s legal team to appoint a special master to review documents seized by the FBI from his Florida home last month and also temporarily halted the Justice Department’s use of the records for investigative purposes.

The decision by U.S. District Judge Aileen Cannon came despite the objections of the Justice Department, which said an outside legal expert was not necessary in part because officials had already completed their review of potentially privileged documents. The judge had previously signaled her inclination to approve a special master, asking a department lawyer during arguments this month, “What is the harm?”

The decision also halts the use of the materials for “criminal investigative purposes” pending the special master’s review, much to the chagrin of the politicized DOJ under AG Merrick Garland.

Here are the details of Cannon’s order, which bars DOJ from reviewing the documents for criminal purposes. Special master candidates are due Sept. 9. Trump does not get his documents back yet. https://t.co/ZymlW7T3EA pic.twitter.com/JJRXvrkwAW

Julie Kelly, who has been covering the January 6 trials, reviewed the documents and posted her thoughts on Twitter.

She noted that despite the Regime Media reports and the DOJ stating the contrary, Trump’s attorneys didn’t file a request for a Special Master “too late.” A request was made on August 9 — the day after the raid.

So contrary to media reports and DOJs filing, Trump’s team didn’t seek a special master “too late” in the process. His lawyer asked for one the day after the raid pic.twitter.com/sD1JycyxMK

They also appear to have taken some of Trump’s medical records… as well as “correspondence related to taxes, and accounting information.” 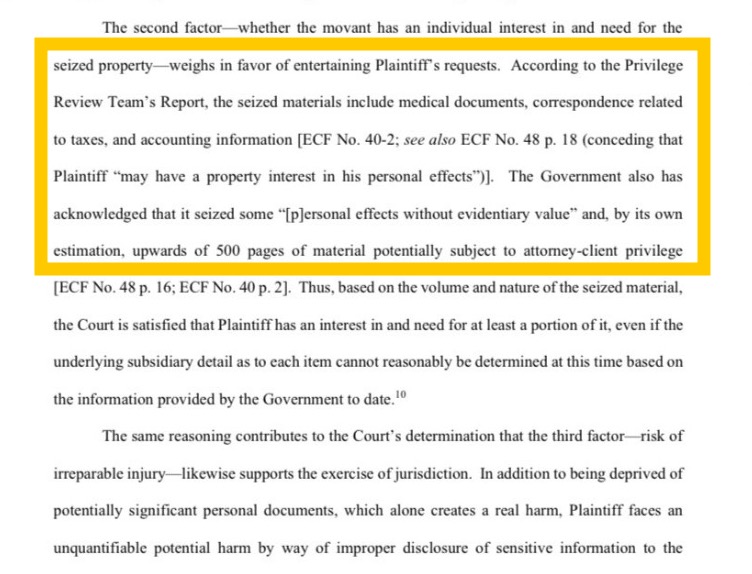 Rachel Maddow must be positively giddy.

Kelly tweets that the Feds have already been exposed to documents that would be considered privileged. 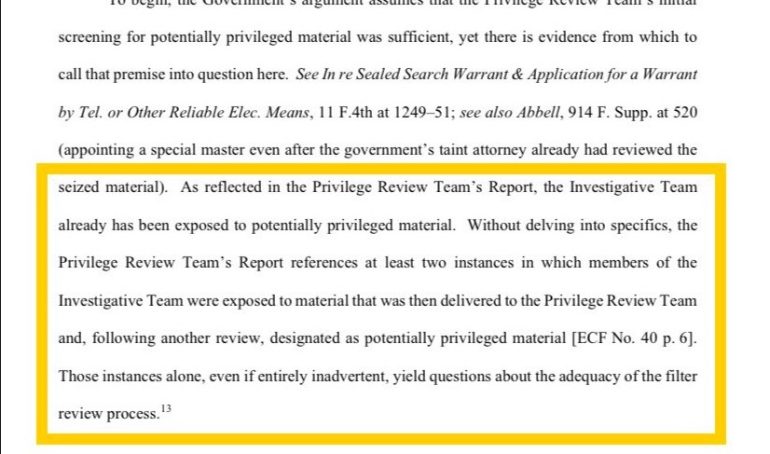 Let’s hope that the DOJ and FBI shot themselves in the foot with the execution of this witchhunt raid on the former President and any “evidence” they gathered would be considered “fruit of the poisonous tree” because of the illegal raid and unbelievable overreach.