They just couldn’t wait to post their hateful tweets.

Queen Elizabeth was a fixed point in an ever-changing world, and a beloved figure even by those who don’t hold the view that world leaders should be chosen by bloodline. Recent polling showed that Queen Elizabeth was better liked than the monarchy itself.

Before she ascended to the throne, she served in the Auxiliary Territorial Service during World War II.

She was a symbol of faith, decency, steadfastness, and service.

The Second Elizabethan era began and ended with Conservative Prime Ministers. At just 26, Elizabeth ascended to the throne at the tail end of Winston Churchill’s leadership of post-WWII Great Britain all the way through 16 Prime Ministers to the newly-elected leader of the Conservative Party, Liz Truss, with whom the Queen held an audience on Tuesday to request the formation of a new government.

Queen Elizabeth II was the longest reigning monarch in British history as well as the longest record for any female head of state. You’d think the “Future is Female” crowd would love that. But, sadly no. She wasn’t the right woman at the head of the right institution.

The journos quickly jumped in to denounce the monarchy, the Queen, and colonialism.

Contributor to The Atlantic, Jemele Hill:

Journalists are tasked with putting legacies into full context, so it is entirely appropriate to examine the queen and her role in the devastating impact of continued colonialism.

Black and brown people around the world who were subject to horrendous cruelties and economic deprivation under British colonialism are allowed to have feelings about Queen Elizabeth.

After all, they were her "subjects" too.

WaPo’s National Political Reporter also wants to talk about the effects of colonialism immediately after the death of the Queen.

Real question for the “now is not the appropriate time to talk about the negative impact of colonialism” crowd:

When is the appropriate time to talk about the negative impact of colonialism?

When’s the right time? Gee, I dunno. Maybe wait until her body is cold, you absolute ghoul?

Perhaps hold back on the ranting about the legacy of colonialism until the official period of mourning is over.

CBS contributor and the author of the recent GQ hagiography of AOC, Wes Lowery:

This is a CBS reporter. He also is one of those privileged elite who the media insists is a necessary voice only because he sees racism everywhere and anything he doesn’t like is racism and you’re a racist if you disagree with him. Yet he is considered an objective reporter. pic.twitter.com/8yJlvs30hO

But it wasn’t just journos. This is a self-proclaimed “antiracist feminist” professor of linguistics at Carnegie Mellon gleeful that the most prominent woman in the world has died after a 70-year reign as monarch of the British Empire. She is so utterly soulless that she began her rant as the Queen lay dying. 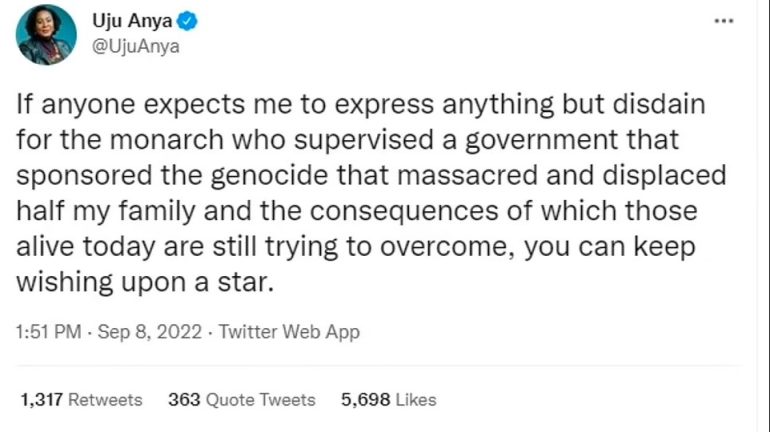 She got some pushback on that from Arizona Senate candidate Blake Masters:

POV: you’re 19, going into 6-figure debt at Carnegie Mellon, getting lectured by this professor on “Blackness in multilingualism.”

“Maybe we shouldn’t rejoice when a 96yo woman dies?” you say. Uju frowns, gives you an F. You register to vote & cast a ballot for @DrOz this Nov. pic.twitter.com/jNchvkyWIq

And even from Jeff Bezos: 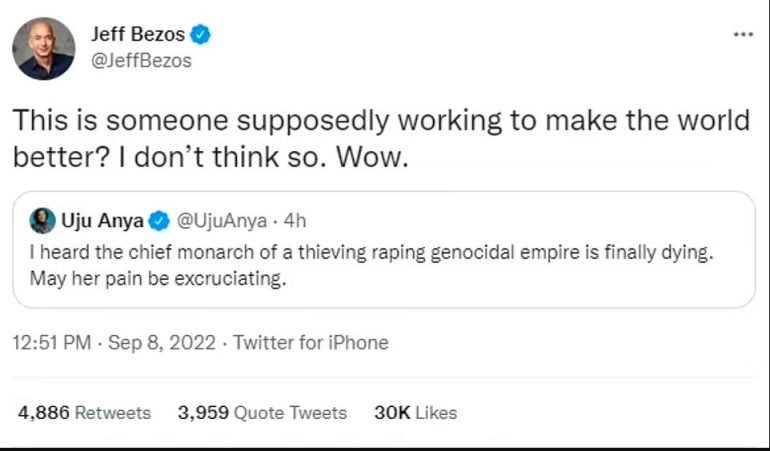 She was shamed into deleting her disgusting tweets, but there are some people with blue checks that have no shame.

Another associate professor from the University of Michigan also started her ranting even before the Queen had died. 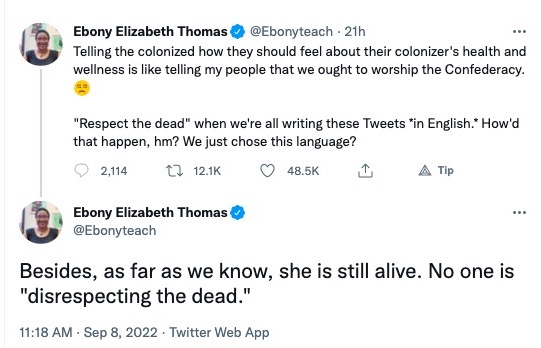 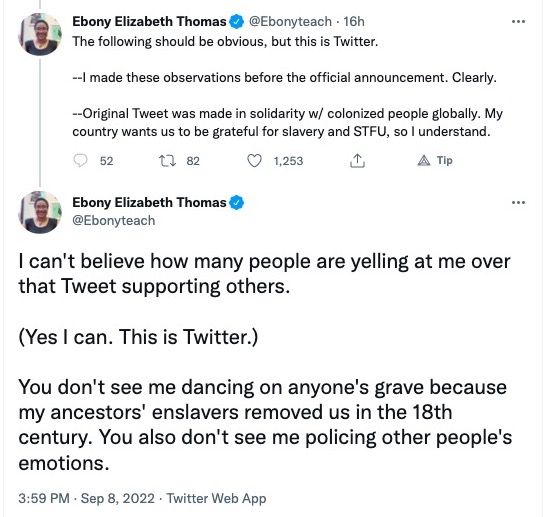 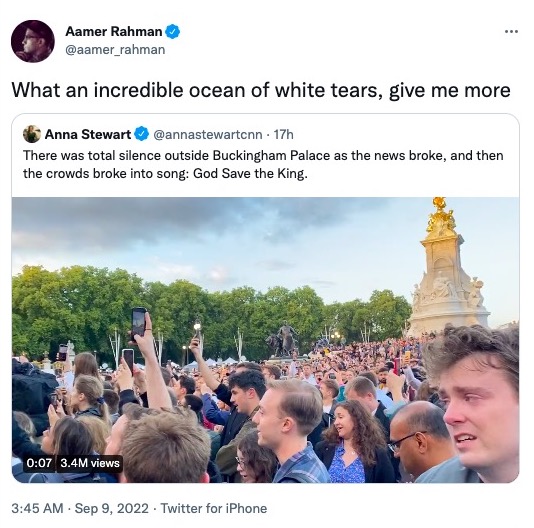 People around the world are mourning the loss of a truly great woman… but also of an era.

Tucker Carlson covered that on his show on Thursday night.

What comes after this is anyone’s guess.

Let’s see if these same ghoulish leftists change their tune and sing the praises of the overtly left-leaning King Charles III and how important his opinion on socialism, climate change, and transgenderism is now that he is head of the British Monarchy.

It should be interesting to watch the way some leftists are going to twist their disdain into a “strange new respect” of the monarchy.