If the sex-ed agenda is merely about educating children and not about grooming them, how do they explain content that invites children to be present for the sexual act?

Left-wing activists tell us that the right’s objections to their pushing a sexual agenda on our children are paranoid and completely unfounded, and yet, every time we turn around, we see them upping the ante on how much sexualized content our children are exposed to.

It’s a multi-front information war with culture itself as the battleground they are trying to gain advantage in. The throw one issue after another at us, we rush to defend a new front while they quietly declare victory on the last one. On and on it goes.

But something changed in the pandemic. Maybe it was the mask mandates. Maybe it was young girls being victimized in the school washroom. Whatever the cause, parents learned they could push back.

Let’s take a small step back and see this fight in the wider context.

Why are we talking about groomers?

Every wonder why the left was so upset with DeSantis putting limits on how teachers could talk to k-3 students about sex-themed topics?

The left worked really hard to make it a story about bigotry against homosexuality. But that was demonstrably false. The legislation didn’t differentiate between ANY sub-set of sexual relations.

All sex-talk was off-limits to the youngest students because most parents think childhood innocence is a good thing. They also think that, aside from people looking to exploit those children, nobody in society benefits from sexualizing young students.

When we pushed back against such people using terms we felt entirely justifiable — words like perverts and ‘groomers’ — Big Tech snapped back.

Groomer was designated ‘hateful speech’ in pretty much the same way that talking about concerns about after-vax symptioms were called ‘misinformation’. One wonders whether this, too, came at the direction of the White House. We all saw how strongly Biden opposed the legislation DeSantis offered.

We’re not talking about direct or indirect references to the sexual act here. We’re talking about content that could would violate FCC regulations if it was aired on network TV.

The activists call us paranoid and ridiculous. But we keep finding evidence to back up our claims.

Sex Ed — from education to agenda

Decades ago, when sex ed was first introduced to the official curriculum in public school, parents pushed back. Experts pushing to bring it into the schools back then was that sexual naivety led to all kinds of unwanted outcomes. Parents couldn’t be depended upon to properly teach the children about sex because many of them barely understood what was going on.

The argument was that overly-sheltered kids would not understand what caused pregnancy. This was a just-the-facts way of clearing away the myth, misunderstanding, and ‘misinformation’.

If this had been the basic biological ‘tab a goes into slot b’ understanding of procreation that every farm kid understands from raising the animals, it might have served some useful purpose. A quick survey of the teen pregnancy rate and sexually transmitted disease stats will show us how successful that experiment has been.

It wasn’t long before that ‘education’ became a delivery system for an ideology rooted in secular preferences for non-monogamous and ‘alternative’ modes of sexuality. Which brings us up to this book.

A whole OTHER kind of ‘sex ed’ book for children

What kinds of ‘educational content’ are we seeing out there for children?

Here’s one example that was being carried on Amazon. 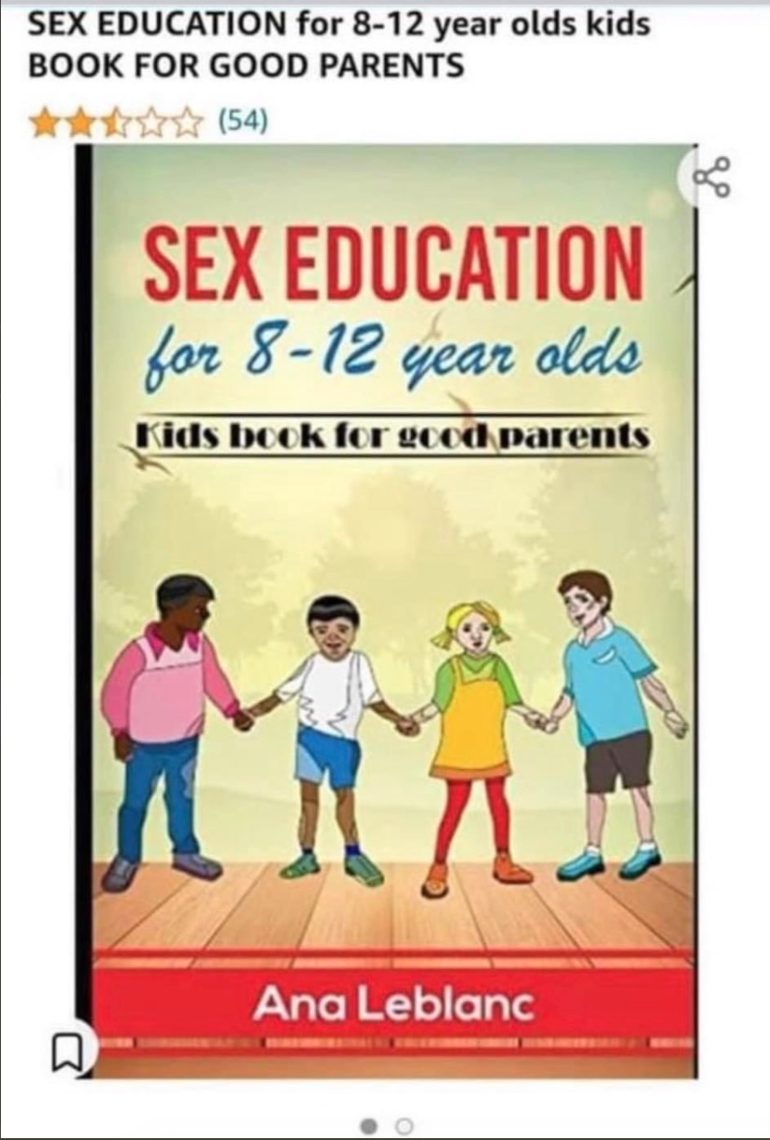 Eight to twelve year olds might seem a little young for many of us — after all, at eight years old, we’re talking about third grade. But the cover doesn’t tell us much. It might be pretty vanilla and just answer the most basic ‘where to babies come from’ questions, or give medical terms for the relevant body parts.

Someone who had access to the book took a photo of what’s written on page 47. 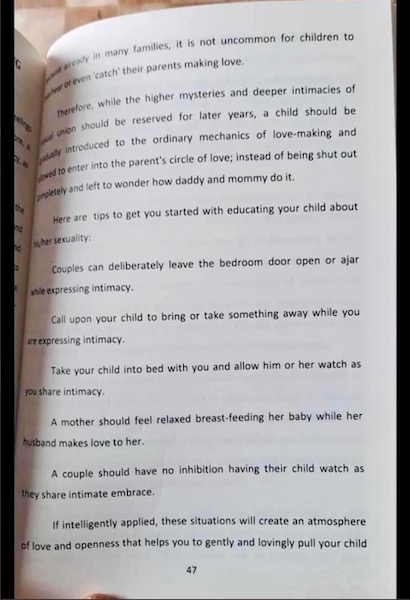 Here’s the text in case the image is hard to read:

‘…already in many families, it is not uncommon for children to [unclear] hear or even ‘catch’ their parents making love.
Therefore, while the higher mysteries and deeper intimacies of physical union should be reserved for later years, a child should be gradually introduced to the ordinary mechanics of love-making and be allowed to enter into the parent’s circle of love; instead of being shut out completely and left to wonder how daddy and mommy do it.
Here are tips to get you started with educating your child about his/her sexuality:
– Couples can deliberately leave the bedroom door open or ajar while expressing intimacy.
– Call upon your child to bring or take something away while you are expressing intimacy.
– Take your child into bed with you and allow him or her to watch as you share intimacy.
– A mother should feel relaxed breast-feeding her baby while her husband makes love to her.
– A couple should have no inhibition having their child watch as they share intimate embrace.
– If intelligently applied, these situations will create an atmosphere of love and openness that helps you to gently and lovingly pull your child…

To which parents and children alike replied…

What is a groomer anyway?

A groomer is a subset of sexual predators. This variety uses coercion rather than brute force. Power is gained over the victim through a prolonged period of ‘normalizing’ abnormal aspects of the relationship. Key among those aspects is the undermining the natural impediments to the predator having control over his victim. This includes the eroding of sexual norms and boundaries.

From a fighting sexual abuse website run by Sexual Abuse Law Firm (dotcom), we see an article explaining the patterns of how a predator gains trust and control over his intended victim. Note the emphaisis on ‘desensitization’ or removing the mystery/strangeness/stigma from the contact.

Stage 5: Sexual Contact
Desensitizing the child to touch is the next step in the grooming process. The adult seeks to exploit the child’s natural curiosity, using feelings of stimulation to advance the sexuality of the interactions.
Gradually the offender increases physical contact–patting on the back, hugging, wrestling, tickling, massaging, or kissing on the cheek. These moves can be subtle and bordering on what a child deems acceptable.
An abuser with close ties to the family may use caregiving experiences, such as diapering, toilet training, bathing, or tucking the child into bed at night, to initiate sexualized actions as a “routine part of care.” Predators may present “cuddling” as a normal activity for adults and children who have “a special relationship.”
A bolder sex offender may discuss sexual subject matter and make more direct sexual advances.

The left pretends to hate all taboos and desire to take them down entirely. The fact that they embrace cancel culture shows that is a lie. They just create new taboos.

The problem is that they don’t understand the fundamental role of taboos in society.

There are two kinds of taboos.

One is the taboo of that which is crass and common. Unless you live in San Francisco, taking a dump in the street (or even leaving the bathroom door open while doing the same) is a form of taboo. It’s crass. It comes with negative ethical, cultural, or health consequences. and we are just disgusted by it.

Eating bugs is another example.

The other kind of taboo is the sacred. You don’t take God’s name in vain, is an example. Because you value it, you treat it differently than other, common, words.

The same goes with sex. Animals in heat will go looking for a mate. Some, like alleycats, aren’t the least bit subtle about it. People, on the other hand are different.

The closeness, the mutuality, and the vulnerability — physical and emotional — lend it a sacredness that even our degraded porn-afflicted culture can scarcely ignore.

It’s precisely the value we place on this dimension of our lives that set it apart as private.

Now that you’ve read the content of that book… is ‘groomer’ really too harsh a word to describe the people eroding the sexual norms and boundaries society builds up around sex?