When the doctor saw how bad the break was, he immediately contacted authorities. It was NOT consistent with the ‘fall in the hallway’ staff claimed had happened.

In case we didn’t already have enough reasons before to pull kids out of public school, here’s another one. It involves an event at a school in Queens in April of 2022.

A 13yo kid with autism got his arm broken while at school… and the school isn’t giving any straight answers. They say he ‘fell’ in a hallway. The doctor looking at the x-ray isn’t buying that. The kid claims a school staffer, a ‘paraprofessional’ was responsible for the injuries. 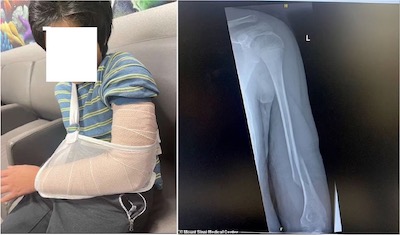 The situation began with the student, (known in the legal brief that has since been filed by his mother as ‘A.H.’) was on an electronic device after it was time to set it aside. That situation became emotionally charged, and A.H. was taken to another part of the school designated for such situations, known as the ‘crisis room’.

Crucial to this story is the fact that there are no security cameras in either the hallway or in the crisis room. The school’s explanations for the injury’s to A.H.’s arm have changed since the first telling. Originally, it was said to have been broken in a fall in the hallway. Later, it was said that A.H. had struck a pole in that hallway.

The student remembers it quite differently.

A staff member at a Queens public school for disabled kids broke an autistic boy’s arm while trying to snatch an iPad from him and then lied about how the child was injured, according to a new legal filing in Queens Supreme Court.
Administrators at the Robert E. Peary school in Ridgewood — a part of the city’s District 75 for students with significant disabilities — say the 13-year-old boy injured himself in a fall while running through a hallway, according to an Education Department incident report reviewed by the Daily News.
But the boy’s mother, Joan Aslarona, said her son has consistently given a very different account — claiming a paraprofessional fractured his arm after a conflict over the boy continuing to use his tablet after electronics time ended, according to the court papers.
Aslarona filed a notice of claim with the city in June, which became public as a result of a Sept. 8 legal filing in Queens Supreme Court asking a judge to force the Education Department to reveal the name of the paraprofessional involved. — NYDailyNews

The school did not disclose the full name of the adult involved in the altercation, and that adult continues to work there. When the child encountered that same adult again at his school 2 weeks after the injury, he was terrified.

Mom isn’t letting this go. She’s fighting for her son.

Good. Because the government is interested in covering it’s backside. It takes a fired-up parent to hold their feet to the fire.