After playing a prominent role in two dramatic Foreign policy disasters in the last year, you might think Joe Bided would be especially careful in his handling of the delicate situation in Taiwan.

China used the cover of the Pandemic to swallow up Hong Kong and their Dear Leader has made it very clear he has ever intention of doing what the Communist Revolution has never quite been able to do to the (still) free Chinese Island of Taiwan… seize it by force.

Not only has his rhetoric become more aggressive, but they have been more sensitive to any failure by the West to accept any Chinese assertions that Taiwan belongs to the CCP. (Remember ‘tough guy’ John Cena? He made the mistake of mentioning that his Fast & Furious film would be opening in theaters in Taiwan. Somebody put a gun to his head and made him make a servile apology … delivered in Chinese.)

It’s only gotten worse this year, with Xi’s enormous military over-compensation after Nancy Pelosi made a point of visiting the island, forcing a de-facto lockdown while China made a show of force.

Biden has already made some public missteps in his handling of the China file which his staff had to quickly walk back and ‘contextualize’ for him. Remember this? 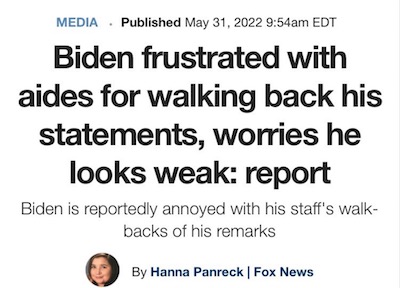 Having been publicly stung on this issue already, surely he’s not going to let it happen again, right? After all, Biden was touted as the Foreign Policy wunderkind. We were assured he has forgotten more about Foreign Policy than most of us will ever know. (Bet they wish they’d phrased THAT one differently.)

Joe Biden sat down for a recorded video with 60 Minutes, where Joe can count on friendly producers making sure his worst moments are left on the cutting room floor, he was given a question about Taiwan.

There was nothing obscure about this one. It should have been an easy hit, right down the center of the plate.

President Biden tells 60 Minutes that U.S. men and women would defend Taiwan in the event of a Chinese invasion. However, after our interview, a White House official told us that U.S. policy on Taiwan has not changed. https://t.co/ANg54LifSH pic.twitter.com/V5qjoqF36T

If someone else is coming along and (repeatedly) correcting the President along the way how are we to believe he is anything more than the wax dummy figurehead trotted out for official occasions, or a full-sized version Jeff Dunham’s Walter whose mouth moves to the words his teleprompter tells him to say, and whose fists tighten and eyes squint in anger, but whose real function is never much more than that?

For all the screaming and crying by the media that Trump would ‘bungle his way into WWIII’, Trump never did. Politics is people, and Trump understood how to deal with people. But Biden?

Those same critics who wagged their fingers at Trump about throwing is into war have nothing bad to say about Biden, despite there being a definite non-zero possibility that some combination of his weakness, appeasement, blind partisanship, corruption, and blundering could take us there.