While Joe Biden is warning us all about the dangers of violent Trump-loving Republicans, an elected Democrat just got arrested for stabbing a journalist to death.

Would that kind of behavior be considered a ‘threat to democracy’? Or are such words reserved for more important issues, like parents showing up at school board meetings?

It should have been a fairly routine story about the usual ‘smooth transition of power’. A low-level elected official comes up for re-election, faces a primary opponent, they duke it out, winner goes on the generals, the loser goes home and licks his wounds.

That is NOT how one Las Vegas primary race played out.

The first part followed the usual script. A challenger came along. A challenger won and advanced while the incumbent lost. It went off script at the goes home and licks his wounds part.

Jeff German was a 69yo reporter for the Las Vegas Review-Journal. He was found dead last Saturday. Police did not take long to arrest their suspect. Their suspect was none other than the incumbent who had been bounced out of his position as Clark County Public Administrator.

The defeated incumbent, a Democrat, was 45yo Robert Telles. He had a history with the murdered reporter. Telles had been ‘railing against’ German for months (including some angry social media posts) on account of reporting the journalist had done that had put Telles in a bad light.

Allegations against German included claims that the reporter had been rooting through his trash and writing ‘lying smear pieces’ about him.

For context, here’s one example of a tweet where Telles had called out the reporter by name.

Clearly, they weren’t going to be exchanging any Christmas cards.

He also had a section on his campaign website called ‘Truth’ which referred to German by name and accused him of conspiring with Rita Reid – his challenger in the Democratic primary for the post of Clark County Public Administrator – to create false stories about him.
Reid, who won the June 16 election, was among those who complained of Telles’ behavior at work – and about his alleged affair with staffer Roberta Lee-Kennett, 45 – to German.
He also accused the pair of conspiring with John Cahill – his predecessor in the role – and claimed the trio were attempting to ‘drag me through the mud’ for their own gain. –DailyMail

The reporter was said by police to have been stabbed ‘during an altercation’ and his death was attributed to ‘multiple sharp force injuries’.

It is believed German may have been working on another expose about Telles when the Democrat (allegedly) attacked him.

You may have noticed we have emphasized the political leaning of Telles.

There is a story behind that, too.

Most of the media — those who never miss an opportunity to link a Republican to any kind of bad news story that comes across the wire — have fallen strangely silent over the subject of this man’s political affiliation.

At a moment when the President himself is denouncing one-half of the country as violent extremists, you might think it’s relevant to underscore that violence isn’t a left-and-right thing so much as a good-and-evil thing. [Even if it could be argued that one party has spent the last few years celebrating ‘mostly peaceful’ riots, and the sitting Veep even helped some of them raise bail money so they could get back on the street and, in at least one case, kill someone.]

One Twitter user documented the partisan media’s refusal to treat that as a meaningful part of the story. Here’s a taste of what he said… 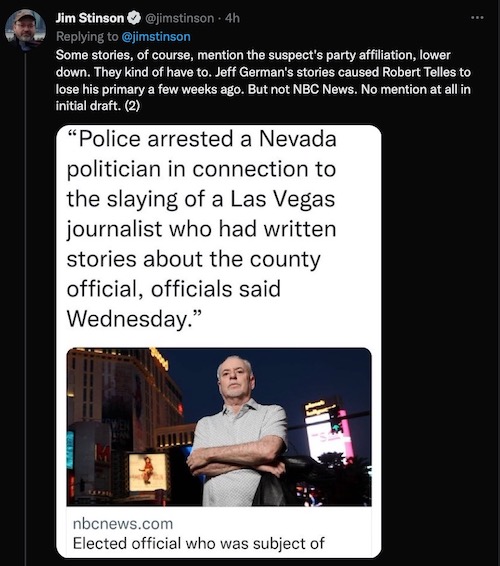 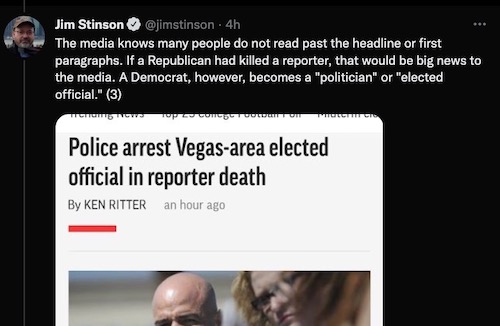 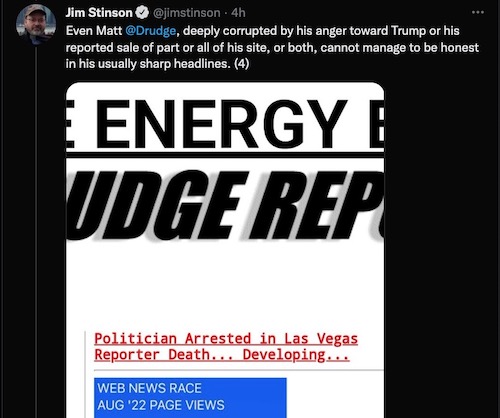 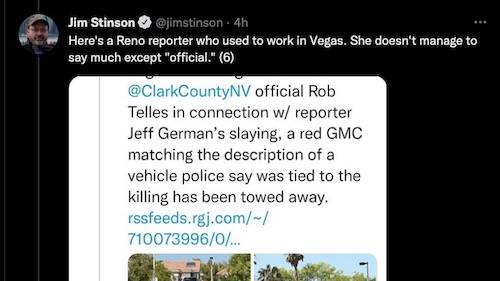 There are a total 13 tweets where he brings the receipts.

So yeah, we’re going there.

A DEMOCRAT politician was arrested for murdering a journalist for — well — telling the public exactly who he was so that an informed public could replace him with someone more worthy of their respect.

In light of the murder charges, their instincts were right on the money.