He seems to like sharing photos of himself on social media that look like a 1970s caricature of a gay man. But there’s more…

The current administration appointed Dr. Demetre Daskalakis as Director of the Division of AIDS Prevention at the Centers for Disease Control and Prevention shortly after Biden was declared the winner of the 2020 election.

There was some celebrating by a few Dems and the LGBT activists when Daskalakis, former deputy commissioner for the Division of Disease Control at the New York City Department of Health and Mental Hygiene, was named to the position. Daskalakis was a leader in public health in NYC and led the response to HIV, the COVID-19 pandemic, as well as other public health emergencies.

With all of the other contentious candidates, his appointment slipped under the radar of most conservatives.

But now that the White House’s HIV Czar is getting a little more prominent by entering the Briefing Room to answer questions about his new role as the Monkeypox Deputy Coordinator, people are starting to ask some questions about who this guy is. 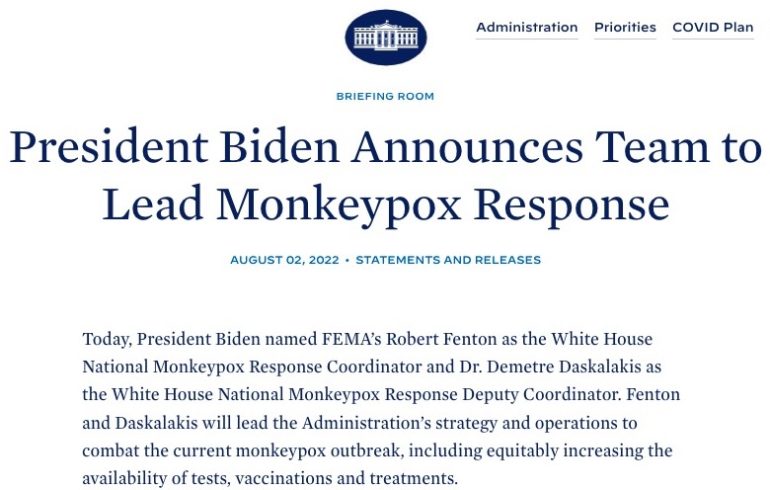 In a presser on Wednesday, Daskalakis downplayed Monkeypox as “just an infection” and despite the disease spreading almost exclusively among gay and bisexual men, insisted that it could be spread through “respiratory droplets” as well as touching contaminated surfaces.

WH monkeypox coordinator Demetre Daskalakis: We're "signaling to people who are in the gay/ bisexual/other-men-who-have sex-w/-men communities, & also transgender people who have sex w/ men, that it’s really important to have awareness that it's circulating." pic.twitter.com/Oqb7UiJmar

While he’s technically right about the contaminated surfaces… there seems to be a connection between sexual activity and the spread of monkeypox.

Grabien’s Tom Elliott found some interesting photos of Daskalakis and shared them with the world on Twitter. 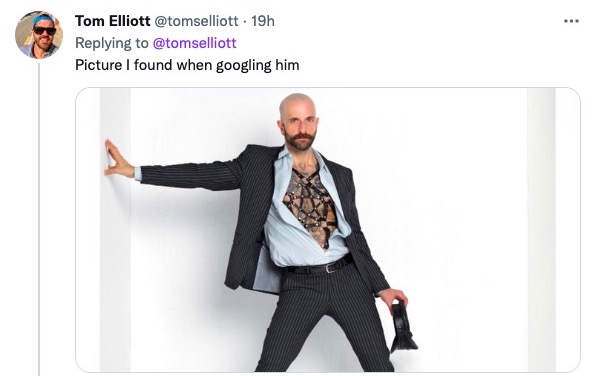 4) When Demetre's not dropping science on monkeypox he's happy to give your soul a spin cycle w/ this trendy goblin getup pic.twitter.com/dE00bEjoaC

The commitment to “inclusivity” by hiring open fetishists is making the United States look absolutely ridiculous on the world stage.

I’m old enough to remember when the left said that it wasn’t any business what people do in the bedroom.

Can we bring that attitude back?

Now it would seem that the government is promoting people that insist on openly and constantly flaunting their sexual degeneracy, deviancies, fetishes, perversions, and paraphilias in public.

Daskalakis fits right in with some of the other White House hires.

This administration’s “inclusive” hiring practices include “trans woman” Dr. “Rachel” Levine as Assistant Secretary of U.S. Health And Human Services who was recently promoted to Four Star Admiral of the  United States Public Health Service Commissioned Corps, as well as “non-binary” drag-wearing, dog-fetishist Sam Brinton, who is the current Deputy Assistant Secretary of Spent Fuel and Waste Disposition in the Office of Nuclear Energy. 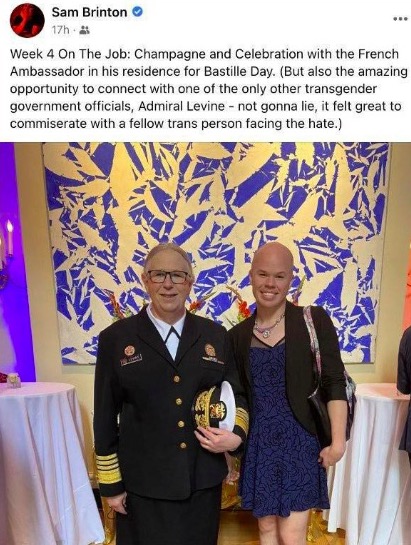 Both of those hires were controversial… and not just because they’re dudes in dresses.

Brinton for his past defense of underage prostitution:

Levine’s controversial decision to follow New York’s deadly nursing home order when he was the Pennsylvania Health Secretary, and the revelation that he took his mother out of a nursing home and put her up in a hotel before making the order, didn’t prevent his appointment to the HHS.

Levine is also a big advocate for so-called “gender-affirming care” for minors without parental consent.

This sudden burst of advocacy is after Levine lived his life as a man for decades. He was married, fathered children, and later transitioned to a rather hideous Dollar store version of a woman that you’re not allowed to comment on unless it includes the words “stunning” and “brave.” If you don’t do properly bow and scrape to the trans ideology or perhaps mention the word “autogynephilia,” then you’re a transphobic bigot.

If journalist Benny Johnson is right, it looks like Daskalakis might have his own special set of controversies…

The Baphomet Pentagram is the official, copyrighted symbol of the Church of Satan. The pentagram has long been associated with various occult beliefs. Satanism, which reveres the accomplishments of humanity and encourages believers to embrace physical wants and desires. pic.twitter.com/qZt2sjTewO

Not cherry picking here. The Pentagram is proudly displayed in his *promotional* photos for a CDC appointment. It’s ubiquitous on his social media. Demetre has Pentagram tattoos.

So it’s a fair question: Did Joe Biden appoint a Satanist? pic.twitter.com/471Fp3uKss

Who knows if this guy is a satanist, but would you really be surprised if he was?

I’m inclined to think that he isn’t because this administration headed by “devout Catholic” President Joe Biden seems like they’d be shouting it from the rooftops as more of the “diversity” that they’re committed to.

How long do you think it’ll be before someone on the left notices that all of these “inclusive” hires are “deputy” and “assistant secretary” positions and the caterwauling begins that they didn’t get the top job?

How do you take this administration seriously if this is who they hire?

These people all work in the Biden Administration pic.twitter.com/fyx6bmGhCB

More importantly, how do Iran, China, and Russia take the United States seriously?

And that is likely the point of these appointments.

The Biden administration is turning the United States into a joke.

But then… just look at who is President right now.