How many different Democrat narratives can a single protest blow halfway to Hell? Let’s count them, shall we?

It was the worst kind of news the Democrats could have hoped for during an election cycle.

When a crowd of obvious Trump-supporting partisans show up for an issue, a Democrat can safely ignore them and know that the media will have their back by doing the same.

…when it’s a crowd that doesn’t fit so neatly into the that’s-just-a-Trump-voter-you-can-ignore-him box, it puts a wrinkle in the story. Especially if the dissent is coming from a voting block on whom your own electoral chances will depend in the fast-approaching election.

If a Democrat saw black voters, for instance, rallying on the opposite side of an issue they stand for, that’s a reason for concern in two ways.

One, it shows that the Democrat agenda and the agenda of a key voting block are out of step. Two, the very presence of any minority group protesting in opposition to the Democrat cause gives tacit permission to a voter block with a lot of I have always voted Democrat, just like my parents voters to look for solutions outside of the party they normally supported.

If the Dems knew what’s good for them, they would pay close attention to what this criticism is before longtime supporters walk away from the party for good.

A group of armed black Second Amendment activists marched through Austin over the weekend and called on the US to close its borders and put an end to illegal immigration.
The protesters, gathered together by the Elmer Geronimo Pratt Gun Club, moved through the city toward the Texas Capitol on Saturday in what they called the “Second Amendment Unity Walk.” — NewYorkPost

They even have a chant: “What do we want? Closed borders. When do we want it? Now!” They were calling for illegal immigrants to ‘go home.’

It might surprise some of our readers — and all of the Democrat media — to know that this group that is marching in support of the second amendmentand and is upset about unfettered illegal immigration doesn’t fit the usual template of MAGA-flag-waving second-amendment supporters.

More than anything, they are echoing the opposition we would see to immigration from 20th Century union bosses trying to protect their workers’ standard of living.

You know it wasn’t your typical Trump rally because when one lady tried to get a ‘Build the Wall’ chant going, she was politely told to stop. ‘Yeah, let’s not do that.’

This is a photo of the march. 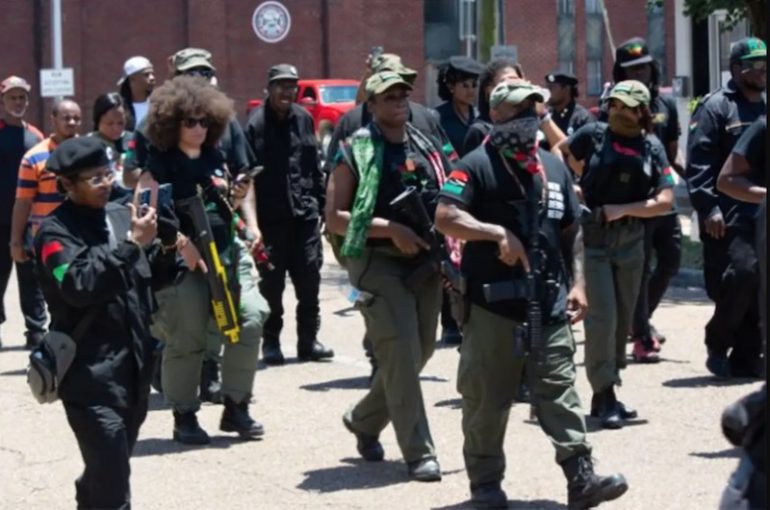 The left loves to project their bigotry on the right, saying Second Amendment supporters would change our tune if we saw black people carrying guns. Any lefties who think that really don’t understand us.

When you look at this photo, you see a group of gun owners with serious respect for the firearm. The barrels are pointed at the ground. You see good trigger discipline.

If this is a fair representation of the group and their attitude toward gun ownership generally, and so long as they have a correspondingly high opinion of the value of human life, we won’t lose a minute’s sleep over them marching with guns.

We’re honestly more comfortable with these marchers owning a gun than, say, Hunter Biden with his drug habit. It’s not the color of the person that makes gun ownership dangerous — it’s the conduct of the owner.

Since these marchers are also calling for reparations over slavery, this group represents criticism not just from within the Democrat party, but an explicit opposition to their immigration policy from the hard left of their party.

The Democrats’ unfettered illegal immigration policies have been presented as a grand plan to ‘help victimized minorities’. Unfortunately for the Dems, the minorities already living here see this policy quite differently.

They see themselves as being victimized by that very same policy.

Biden, Kamala and the Dems should think twice about blowing these people off. But they won’t, because they’ve already committed to this course and there’s no turning back now.

Their Billionaire donors would never let it happen.