Things have gone horribly wrong for AOC when she’s being taunted as a fake Progressive because she backs Establishment positions on war.

AOC had one helluva honeymoon, but some New Yorkers in her congressional district are getting sick of her schtick.

The things SHE cares about are not the same things voters in her district care about, and she’s getting an earful.

What is AOC passionate about? She’s passionate about empty prisons, open borders and the Green New Deal which her own Chief Of Staff admitted was about reengineering the economy, not the saving the environment. (That quote is about half-way down in this article.)

Her constituents, on the other hand, are a little more interested in genuine threats to life and existence — trivial concerns like waking up to a Mushroom Cloud over their city, for instance.

It’s not as though an irradiated Big Apple is an unlikely threat. In July, the city started running PSAs about what to do in the event of an attack. We’ve seen reports that some levels of government have begun stockpiling supplies and medicines relevant to radiation exposure.

With Putin not-so-subtly threatening the use of his Nuclear arsenal as the conflict in Ukraine drags on, New Yorkers understand that if nuclear warheads ever do start flying, they live in a city that would soon glow in the dark.

Just like that, all the existential angst of the Cold War has suddenly come alive in a generation that has never had to seriously grapple with these issues before.

AOC clearly is not used to facing the sharp end of the stick being held by impolite activists. But she’s got nobody to blame but herself. Her own example has blazed a path showing them that patience and manners can go right out the window when it comes to issues of existential survival.

Rep Cortez set the precedent by marching a crowd of climate activists straight into Nancy Pelosi’s office in what would surely be called a criminal ‘threat to democracy’ if the same stunt had been pulled in the name of some Republican cause. 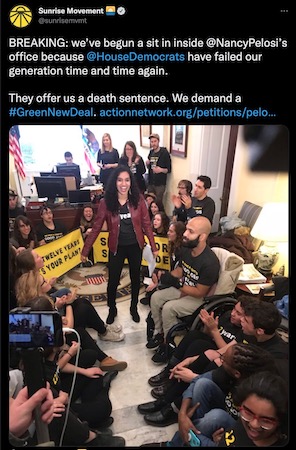 But when angry Progressives come to her OWN sparsely-attended town hall meeting and start talking out of turn, she gets huffy. She starts talking down to her constituents like some kind of angsty substitute teacher demanding that her class follows the rules.

Of course, if anyone had told her that her protests were rude or disrespectful, she would have doubled down and laughed in their faces.

The main video, which is focused on AOC, only shows her responses. You can’t really hear what the crowd is yelling at her. It’s an hour long, but we’ve cued it up to the relevant moment.

It’s ok that we can’t hear her hecklers. They have conveniently provided the video that she wouldn’t have wanted us to see.

My friend @Noggatone and I confronted Congresswoman @AOC on her support for Nuclear War and Ukrainian Nazis. I call her out for being a coward in the face of the party that will push us all into Nuclear war right now. Will she stand up like @TulsiGabbard and fight for peace? pic.twitter.com/aQiQvQSWIN

They shout that Tulsi is courageous for calling out the dangerous war-mongers but AOC is a sellout helping us all to sleepwalk our way into WWIII.

AOC is out of her depth here. She’s used to controlling the narrative and demonizing somebody else as the ‘bad guy’ that her ‘righteous cause’ is opposing. She doesn’t know what to do in a situation where she’s the one being called to account.

This clip has been picked up by a lot of other people. The commentary of those retweeting it is pretty amazing. She must really HATE that this is going viral.

AOC does town hall, barely anyone shows up, and she gets her ass handed to her by a constituent.

Progressives have no support other than corporate media and big tech.

“I believed in you and you become the very thing your sought to fight against.”

If you like the rowdy spirit that stuck a pin in Alexandria’s oversized ego, you will really like our Big Dawg Doug Giles’s newest release. It only came out this week, but has already hit #1.