This guy and a handful of others exposed the sham of these so-called government “gun buyback” schemes.

The gun-grabbers insist that turning in your firearm for a gift card is “getting guns off the streets” and is “making communities safer.” Really?

Are a lot of criminals handing over an illegal weapon that they probably paid a pretty penny for to the police so they can get a gift card?

But Democrats insist that this is the way forward — take away firearms from law-abiding gun owners and ignore the illegal guns owned by criminals that are the ones used in most firearm crime.

New York announced that they were going to have a gun buyback program in Utica in late August.

One guy, only identified as “Kem”, decided to expose the insanity of the buyback program. He used his $200 3D printer to make gun parts to sell back to the police in the “buyback” program after seeing reports of people doing the same in other jurisdictions.

Kem said that he drove 6 hours with over a hundred 3D-printed “lower receivers and frames for different kinds of firearms” and managed to negotiate an impressive $21,000 in gift cards.

A man who identified himself only as “Kem” saw people tweeting about using 3D printers to make guns for the sole purpose of selling them for big bucks at gun buyback programs, like the one the New York State Attorney General’s Office held at the Utica Police Department last month. He got to work on a $200 3D printer he got for Christmas.

“I 3D-printed a bunch of lower receivers and frames for different kinds of firearms,” said Kem.

Then, he drove six hours to Utica.

This began a haggling and negotiating session with Attorney General’s Office staff that lasted all day long.

“And it ended with the guy and a lady from the budget office finally coming around with the 42 gift cards and counting them in front of me,” said Kem. “$21,000 in $500 gift cards.”

“Nobody thought this through. If you look at the flyer, it is just the gravest thing that Letitia James could have done,” Kem told WKTV in an interview. “She literally put a bounty on 3D-printed guns. She said, ‘I will give you extra money if it doesn’t have a serial number on it’ — they didn’t touch on any details, there was no fine print, and that’s why I was able to walk out with $21,000.”

Attorney General Letitia James is very, very upset about this.

A statement from the NY AG’s office said:

It’s shameful that this individual exploited a program that has successfully taken thousands of guns off the streets to protect our communities from gun violence. We have partnered with local police throughout the state to recover more than 3,500 guns, and one individual’s greedy behavior won’t tarnish our work to promote public safety. We have adjusted our policies to ensure that no one can exploit this program again for personal gain.

The AG’s office is calling the outmaneuver “greedy behavior” and insists that the so-called “buyback” was a success.

“I’m sure handing over $21,000 in gift cards to some punk kid after getting a bunch of plastic junk was a rousing success,” said Kem laughing. “Gun buybacks are a fantastic way of showing, number one, that your policies don’t work, and, number 2, you’re creating perverse demand. You’re causing people to show up to these events, and, they don’t actually reduce crime whatsoever.”

If you look through the comments on pretty much any news reports on gun buyback programs, you’ll see that most of the guns turned in are old, useless, and broken and aren’t the ones that need to be taken “off the street.”

Then there’s this gem that was posted to the WATM 1100 NewsRadio article about Kem:

That story about cobras in Delhi under British colonialism is true, by the way.

Is it all about the incentives in this case? Well, the incentives are certainly a perk. But in this case, it seems that handing over bits of plastic gun parts for pre-paid debit cards is more likely than trading in an actual working firearm that is worth way more than what you’d get for it in the “buyback” program.

Kem posted a photo of the parts and his loot on Twitter and is standing by his money-making scheme.

I was the main reason for the rule change, showed up with 60 autosears and made out with $21k in gift cards. pic.twitter.com/vZ7PiR1wuA

And he said he wasn’t alone — he said that three other guys that he met up with also got another $24,000. Kem and his crew managed to make $45,000 from the Utica Police Department for bits of plastic.

Yeah, drove six hours to scam the shit out of them. Three other guys linked up and we ran the Utica PD for a total of like $45k between all of us.

They really didn't want to. I'm willing to get on mic and talk about the whole thing, and the other three guys can corroborate the story.

Dang, dude! What a way to make some cash and expose the insanity of the Dems.

Quick… somebody get this guy this shirt: 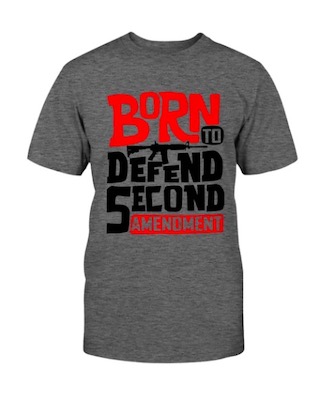 Check out more Badass Patriot Gear in our ClashDaily store.