After The Fall of Adam and Eve in the Garden of Eden, God prophesied to the serpent, that the Seed of The Woman would crush the head of the serpent (Gen.3:15). Yep, when Satan thought he’d bested mankind’s mom and dad, God told the slithering one that that little stunt has earned you a skull-crushing.

Crushing the enemy’s noggin is a noticeable note that runs through sacred scripture.

When Israel’s enemy, Sisera, thought he’d escaped Deborah’s wrath by hiding in a fair maiden’s tent, he thought wrong. After Jael plied Sisera with some milk and he went down for his little nappy, Jael picked up a hammer and a tent peg and nailed his head to the ground. Can you say, “Skull crushed?” (Judges 4 & 5).

The murderous and power-hungry, Abimelech, had his pipe-dream of power abruptly ended when a ballsy lassie loosed a decent sized rock on his head from the top of a tower he was attempting to take. #splat (Judges 9)

Fast forward a few hundred years to the time when Goliath had all of Israel curled up in the fetal position, wetting their big diapers, over the giant’s taunts. None of Saul’s men would confront the champion of Gath, until David rocked up and put a rock in his skull and then proceeded to sever his hideous head from his body with the dipstick’s own sword. As Freddy Mercury would say, “Another one bites the dust.” (1Samuel 17).

Which brings us to The Ultimate Skull Crusher: Jesus Christ. I don’t know if they taught you this in youth group but Jesus was crucified at The Place of The Skull, aka Golgotha (Mark 15:22). Here, like in the Garden of Eden, in Genesis 3, Old Slewfoot thought he’d 86’ed God’s special Son. Per usual, Satan overplayed his hand, and through death Jesus destroyed him that had the power of death, that is the devil (Hebrews 2:14). Again, and pardon my redundancy, Christ’s victory on the cross was at The Place of The Skull.

The victory that Christ won over Satan, via His death, burial, resurrection and ascension; has been given to His people. Paul put it this way in Romans 16:20 “the God of peace shall bruise Satan under your feet shortly”. Did you catch that? If you’re in Christ, then one of the perks of being in His fold is that you too are to crush Satan underneath your feet. Ergo, my beloved, get busy crushing demonic skulls for God’s glory. Can I get a witness? 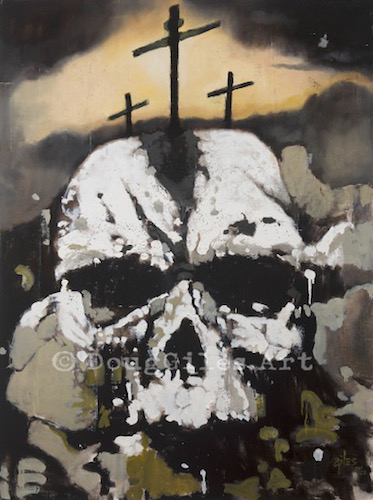 Here’s my Skull Crusher painting that I did to remind the believer of Jesus’s victory over Satan and their victory over his schemes as well. The original is currently available. Here’s three buying options. Use promo code ‘fall30’ at check out to receive 30% off all art.