Republicans want election rules that make it easy to vote but hard to cheat. Democrats, on the other hand, are now openly flaunting the law.

In what should be a major win for election integrity advocates, the Supreme Court tossed out a lower court ruling that had permitted undated mail-in ballots to be counted against the law in Pennsylvania — but the Commonwealth’s secretary of state has other ideas.
…But immediately after the court’s decision was made public, Pennsylvania’s Acting Secretary of State Leigh M. Chapman released a statement saying the court’s ruling does not affect the decision of the 3rd Circuit “in any way.”
“Today’s order from the U.S. Supreme Court vacating the Third Circuit’s decision on mootness grounds was not based on the merits of the issue and does not affect the prior decision of Commonwealth Court in any way,” Chapman wrote. “It provides no justification for counties to exclude ballots based on a minor omission, and we expect that counties will continue to comply with their obligation to count all legal votes.” –TheFederalist

That set the stage for a lawsuit in which the RNC is petitioning the court to declare that guidance given in open defiance to the SCOTUS ruling is invalid.

Here’s a screenshot of the ‘about’ page for the elected official who has set herself above the law in defying the court’s ruling. We highlighted an interesting portion of Leigh Chapman’s bio. 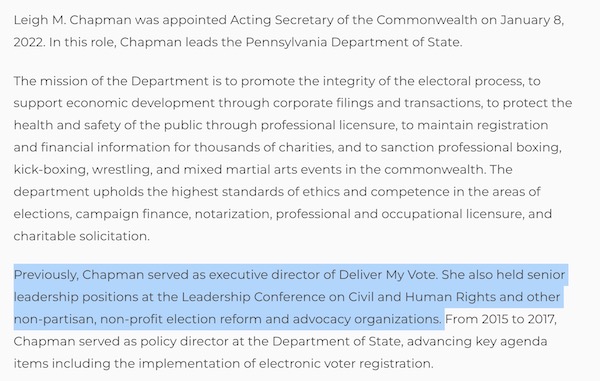 The General Assembly has mandated that a voter who uses an absentee or mail-in ballot “shall . . . fill out, date and sign the declaration” printed on the outer envelope of the ballot. 25 P.S. §§ 3146.6(a), 3150.16(a). A majority of this Court has already held that any absentee or mail-in ballot that does not comply with the General Assembly’s date requirement is invalid and cannot be counted in any election after the 2020 general election.

…Nonetheless, following the Supreme Court’s vacatur order, the Acting Secretary of the Commonwealth has doubled down on guidance that purports to direct county boards of elections to “include[] in the canvass and pre-canvass . . . [a]ny ballot-return envelope that is undated or dated with an incorrect date but has been timely received.”

…Petitioners are Pennsylvania voters and political party committees that support and seek to uphold free and fair elections on behalf of all Pennsylvanians. Petitioners therefore ask the Court to exercise its King’s Bench power or extraordinary jurisdiction to uphold the General Assembly’s date requirement for the imminent 2022 general election and beyond. In particular, Petitioners ask the Court to issue a declaration that the date requirement is valid and mandatory, and that the Acting Secretary’s contrary guidance is invalid. Moreover, to preserve the rights of all voters and candidates, the Court should immediately issue an order directing county boards of elections to segregate any undated or incorrectly dated ballots received for the 2022 general election, as the Speaker and Majority Leader of the House of Representatives have requested.

…The Court therefore should take immediate action to uphold the General Assembly’s date requirement and to set aside the Secretary’s invalid guidance. Such action will promote “[c]onfidence in the integrity of our electoral process,” facilitate “the functioning of our participatory democracy,” and eliminate the “consequent incentive to remain away from the polls” that the current state of affairs creates.

Democrats tell us that any question about election integrity is ‘wrong’ and ‘conspiracy theory’ — except when the try to tell us there is ‘voter suppression, and that showing ID is ‘Jim Crow 2.0’ or, in Joe Biden’s case, ‘Jim Eagle’.

We’re supposed to ignore any facts that contradict their narrative, ranging from the record turnout in Georgia despite election laws improving election integrity that supposedly ‘suppressed the vote’ all the way over to ‘elections are secure already’ … when even someone whose actual job it is to enforce election law is attempting to skirt it.

This is a topic the censors don’t want us talking about… they think intimidation will force silence.

But you’re not intimidated, are you?