Nancy Pelosi may be telling the world that Dems will tighten their hold on the House and Senate in November, but the DCCC director sees a different picture.

A WaPo piece featuring DCCC Executive Director Tim Persico was softening their readers up for potential disappointment in November.

Top Democratic strategists have concluded that they lack the funds needed to fully contest all of their potentially winnable House races this cycle, people familiar with the situation said, forcing tough decisions about where to spend on television ads as Republican outside groups flood the airwaves.
…“There are places that I don’t know if we are going to be able to get to,” said Tim Persico, the executive director of the Democratic Congressional Campaign Committee. “It’s just money. They have billionaires and corporations stepping up with big checks and we just don’t have the same type of support. We are just getting outspent everywhere, so it is just a question of how much can we withstand.”
…Democrats pointed to a TV ad spending advantage by Republican outside groups, which have the flexibility to move money around the House landscape strategically in the final weeks. That edge has become more alarming as a recent shift in the national mood has put more seats in contention for Democrats, who find themselves hamstrung by the Republican advantage in donors on the GOP side.
Another House Democratic strategist said the inability to fully fund key races could prove to be the difference between winning and losing control of Congress, or between keeping Republicans to a five-seat majority and a 15-seat majority. “I don’t think it is hyperbole to say at this point that money is going to make the difference,” said this person, who like others spoke on the condition of anonymity to talk more freely about strategy. –WaPo

The official story is that Republicans have all the wealthy and powerful backers, and the poor grassroots Democrats just can’t keep up. Do you buy it?

Do you really believe they lack the deep pockets that the Republicans can call on? Some of these splashy names in State Races (think of the ‘Stacey Abrams’ tier of Dem candidates) get enormous out-of-state backing, mostly from the coasts and just a fraction of their total funding at home.

Open Secrets would remind us that far-and-away the biggest fish in the game of political donors backs the Dems. It’s not even close. There are a lot of Republicans further down that list, but top spot gives almost 3 times as much as the guy in second place. 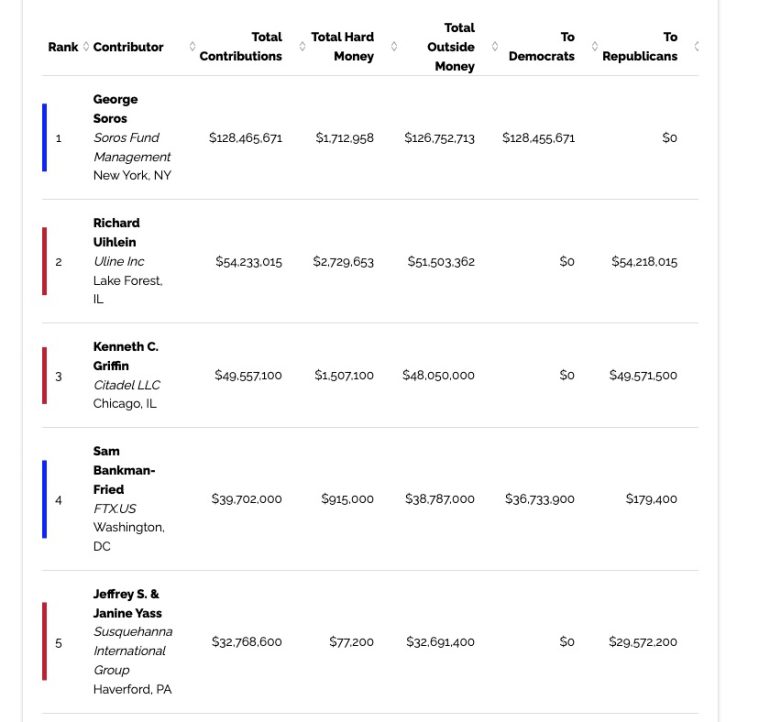 There is a very simple reason Dems don’t have the money they need to ‘flip’ the seats they are trying to compete for. They are trying to use big-dollar advertising to overcome a very different problem, one beyond the ability of any campaign manager to control.

The hard reality of life under Biden’s Democrats is hitting voters like a fist in the face.

Democrat campaigns aren’t looking for a two- or three-point bump in the polls to get them over the finish line. Many of them are digging out of a much deeper hole than that.

From a campaign perspective, numbers boil down to a question of persuasion. Because of the nature of their job they will always see this as a question of money. But it’s more than that. It’s a question of trust.

You need look no further than Biden’s own popularity numbers, or the confidence polling shows the average voter has in his ability to make decisions on the big issues that affect their daily lives to know why no amount of money will be enough to save some of these seats.

Aren’t people like Tim supposed to be hyping their candidate’s chances right up until the bitter end? You’d think so. Unless they have run the numbers and see they’re pretty much toast.

If that’s the case, the next step for someone in that position might be damage control.

If someone like Tim can get in front of a catastrophe and point to Republican spending or whatever as your excuse, then maybe — just maybe — it won’t be Tim’s scalp nailed to the wall when people go looking someone to blame for a serious failure.