Big changes are happening over on Twitter… but when will “America’s Favorite President” make his long-awaited return?

As of October 27, 2022, Elon Musk became the proud owner of the microblogging social media platform, Twitter.

the bird is freed

While Musk is clearly having fun as “Chief Twit” many users are wondering when Trump’s account will be restored.

Can you imagine how epic @Twitter would be if @RealDonaldTrump would be reinstated right now? pic.twitter.com/tUsmiGKK5K

Musk has indicated that he will restore user accounts that were given lifetime bans… including former President Donald J. Trump.

Elon Musk has formally taken over Twitter, triumphantly posting ‘the bird is freed’ and immediately firing several top executives.
His next move will be to restore users who have been handed lifetime bans from the platform – including former US president Donald Trump.

One of the people fired immediately was Vijaya Gadde, who was head of legal policy and the force behind Trump’s permanent ban as well as the suppression of the Hunter Biden Laptop From Hell story.

BOOM: Musk Cleaning House As He Takes Charge At Twitter

It looks like the cost of the cheap shot that Gadde took against a sitting President that robbed the world of that incredible content is… her job.

EXPOSE TWITTER: Twitter Exec Says That Trump’s ‘Time Out’ Was Just The Beginning — The Purge Is Going Global

You know she probably cried. She did during a board meeting in April discussing Musk’s takeover of Twitter.

That era is over and Twitter is now free.

“A Successful Hunt” was originally painted in March of 2021.

The Original is currently available. 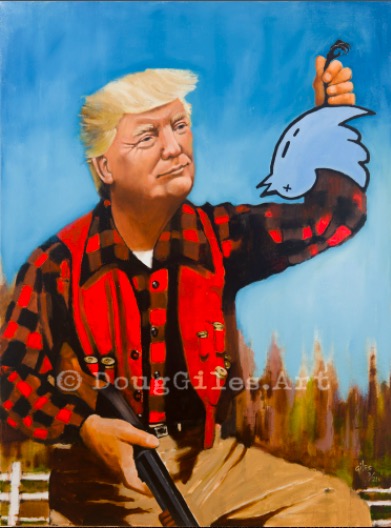