It normally takes years for pharmaceuticals to make it to the marketplace… because of things like this.

After the money-making success of the mRNA shots, pharmaceutical companies were rushing to create a new cash cow in the form of treatment for the “China virus” since it was pretty clear that the jabs were not “sterilizing” vaccines — meaning that they didn’t prevent the spread of the illness.

At best, the claim is that the mRNA shots are basically preventative therapeutics that are taken prior to infection to reduce symptoms and prevent severe illness, hospitalization, and death. How that is actually proven with the milder form of the virus spreading and most of the population with natural immunity from prior infection is unclear.

And it turns out… the pill wasn’t working exactly as expected. President Biden, his COVID Czar, Dr. Tony Fauci of the National Institute of Allergy and Infectious Diseases, and First Lady Jill Biden all tested positive for “Rebound ‘Rona” after taking Paxlovid.

Despite the “rare” rebound cases hitting three of the most prominent people in the United States, the Biden admin promoted Paxlovid as a “wonder drug” that would help end the pandemic… just like they did with the non-sterilizing “vaccines.”

And, just as they did with the jabs and the risk of myocarditis, they didn’t really mention that there were possible serious drug interactions with Paxlovid.

As part of the Biden administration’s “Test to Treat Initiative” announced this spring, Pfizer’s antiviral pills were available without seeing a doctor. If someone tested positive for COVID, Paxlovid was made available over-the-counter at pharmacies across the nation. The catch was that pharmacies had to be in contact with a doctor who could check for drug-on-drug interactions.

It’s now pretty clear how important this caveat was after a recent study shows that Paxlovid can have some very serious — potentially deadly — interactions with commonly-prescribed medications.

Researchers from Lahey Hospital and Medical Center, Harvard Medical School and other US institutions found the Covid drug can increase the risk of developing blood clots when taken with blood thinners.
It can also cause an irregular heartbeat when combined with drugs for heart pain and when taken alongside statins it can be toxic to the liver.
Dozens of medications such as aspirin are safe to take with Paxlovid, the researchers stress. But doctors need to be aware that other drugs can be dangerous and should be discontinued or adjusted while a patient is being treated for Covid.
Source: Daily Mail

Paxlovid is made of two antivirals — nirmatrelvir and ritonavir. Ritonavir inhibits metabolism and increases the dose of the other drug, but it can also inhibit the metabolism of other drugs that are being taken like blood thinners, statins, and other commonly-prescribed medications.

“Awareness of the presence of drug-drug interactions of Paxlovid with common cardiovascular drugs is key,” said Dr. Sarju Ganatra, the Director of the cardio-oncology program at Lahey Hospital and Medical Center in Massachusetts. “System-level interventions by integrating drug-drug interactions into electronic medical records could help avoid related adverse events.”

“The prescription of Paxlovid could be incorporated into an order set, which allows physicians, whether it be primary care physicians or cardiology providers, to consciously rule out any contraindications to the co-administration of Paxlovid,” said Dr. Ganatra.

“Consultation with other members of the health care team, particularly pharmacists, can prove to be extremely valuable,” he said. “However, a health care provider’s fundamental understanding of the drug-drug interactions with cardiovascular medications is key.”

Here at ClashDaily, we believe that all medical decisions should be made with informed consent after consultation with a medical professional that can assess your individual situation.

That said, it’s been very clear that there are some doctors that are so terrified of one particular illness that they’re willing to allow other aspects of health to be sacrificed on the altar of COVID-19.

It would be nice if there was a little balance in weighing the risks and benefits to interventions before making blanket recommendations that might actually do more harm than good for some people.

Tell the COVIDictators that enough is enough.

Check out our ClashDaily EXCLUSIVE ‘I Stand Against White Coat Supremacy’ Unisex T-Shirt. 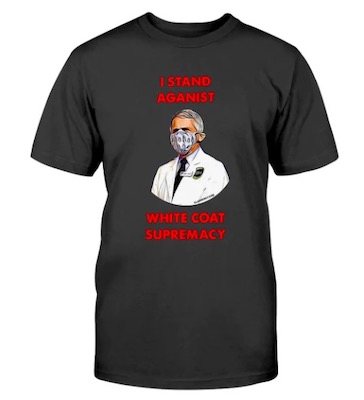 For more Righteous and Rowdy merch, check out our ClashDaily store.