They thought that they had him, but J.D. Vance is one of the NEW Republicans… and they don’t roll over easily.

In their October 10 poll, Vance is trailing Ryan by just 0.3%. Not too shabby for a novice against a sitting Congressman… and we know that most polling oversamples Democrats, so take it as you will. 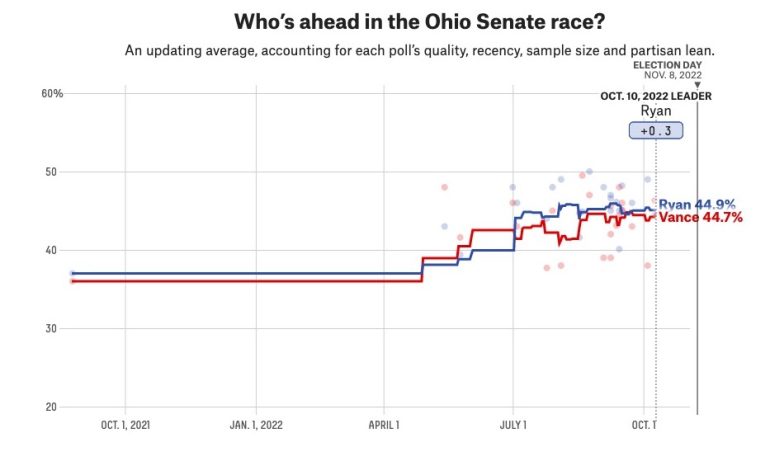 Vance is a venture capitalist. lawyer, and bestselling author because of his memoir, Hillbilly Elegy, which was adapted into a film directed by Ron Howard and starring Glenn Close and Amy Adams, much to the chagrin of the rest of Hollywood.

He has a calm demeanor, steely confidence, and is smart as a whip.

One moment from the debate went viral on right-wing Twitter almost immediately — Vance was asked if he believed in any exceptions to abortion. Ryan had tried to paint Vance as an extremist citing a horrific case of a 10-year-old girl that went out of state for an abortion after a trigger law kicked in when Roe was overturned.

It’s one of those fringe examples that pro-aborts glom onto when many anti-abortion advocates would grant that exception for the safety of the mother. It’s not even clear whether the child should have even had to go out of state or if it would have been one of the few exceptions permitted because of her age.

Vance deftly turns the question around and puts Tim Ryan on the hot seat. You can see Ryan get very uncomfortable as Vance calmly blasts him with facts.

Oh man. Tim Ryan was very shook at the end. Really was jarred and had no response. This type of debate style by JD Vance is the new standard. Hold Democrats accountable. They are the ones doing evil. No more apology tours. Put them on the hot seat.

J.D. Vance to Tim Ryan: “You voted so many times against border wall funding, so many times for amnesty, Tim. If you had done your job, she would have never been raped in the first place. Do your job on border security, don’t lecture me about opinions I don’t actually have.”

This is the way forward. J.D. Vance, Kari Lake, and Blake Masters are just a few of the new brand of conservatives running for office in 2022 that are fearless, confident, and aren’t going to roll over and let the Democrats and their media sycophants use them as punching bags. These candidates are fighting back and putting their opponents on defense.

It’s a thing of beauty.