Democrats are circling the wagons and defending this guy’s position that parents pose a threat to their own children.

Take note, voters — this top Democrat thinks that schools are more concerned about the well-being of children than their own parents.

It’s in stark contrast to what most parents think.

As reports are coming out that more and more school districts are hiding the fact that some students are “socially transitioning” at school from parents, the new voting bloc of concerned parents is waking up and pushing back on these policies.

The Chair of the New Hampshire Democratic Party Raymond Buckley thinks that school districts should be able to keep gender identity counseling at school a secret from parents.

“Should parents have the right to know if their children are receiving gender identity counseling at school, or is Manchester school district right to keep it secret from moms and dads?” asked the New Hampshire Journal in a Twitter poll.

The results were crystal clear.

Should parents have the right to know if their children are receiving gender identity counseling at school, or is Manchester school district right to keep it secret from moms and dads?

Although Twitter polls are not exactly “scientific” (for lack of a better term) it’s pretty startling to see 90% of people agreeing about anything on Twitter.

Conservative commentator Michael Graham noticed that despite the very clear poll results, New Hampshire Dems are pushing for the opposite.

“The most interesting part of this story out of #NHPolitics is that @RepChrisPappas is unabashedly arguing that parents should NOT have the right to know about behavior of their own children,” wrote Graham quote tweeting the New Hampshire Journal.

Buckley responded to Graham’s tweet saying that it was vital for schools to offer gender counseling to kids and hide their gender confusion from their parents otherwise, the parents might beat the kids to death.

“You’re purposely going after children, endangering their lives, mental health & safety & its disgusting. Not all families are the same, some kids will be kicked out or beaten (to death) or commit suicide. All to try to get votes for Karoline? #NHPolitics,” wrote Buckley. 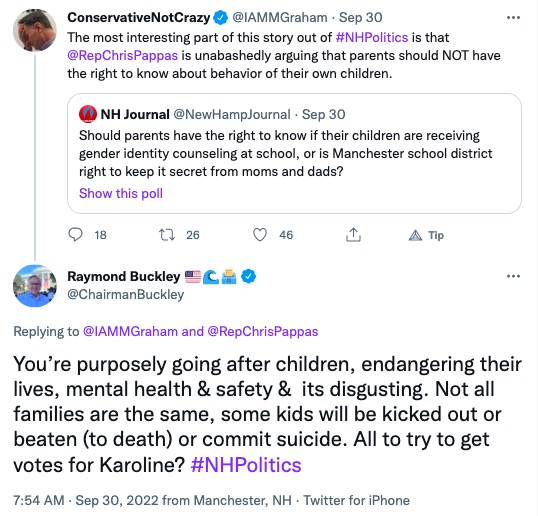 When pressed for evidence of his claim, Buckley tweeted four screenshot headlines citing horrific incidents where gay children were murdered by their parents.

But are parents really the greatest threat to students? There are literally hundreds of instances of teachers preying on and abusing students. And we’re just supposed to ignore that and let them talk to kids about their “gender identity” without parental consent? How about… No.

“The chair of @NHDems stating clearly the party’s position is that teachers should decide what parents are allowed to know about their own children. @RepChrisPappas voted Thursday to kill a requirement schools inform parents when their kids receive counseling at school,” wrote Graham.

The chair of @NHDems stating clearly the party's position is that teachers should decide what parents are allowed to know about their own children.@RepChrisPappas voted Thursday to kill a requirement schools inform parents when their kids receive counseling at school. https://t.co/RGgBTwLXt9

What is truly incredible is that New Hampshire Democrats are standing by Buckley’s insane comment.

Graham wrote in the New Hampshire Journal that they’re circling the wagons around Buckley.

"Despite repeated requests for comment over the past four days, @SenatorHassan and @RepChrisPappas have remained silent about Buckley’s description of New Hampshire parents as potential murderer. The @NHDems candidate for governor, @TomShermanNH has also refused to comment."

Buckley’s smear of parents as abusers who would abandon or murder their own children was met with outrage from Republicans and parents’ rights advocates.

Granite State Democrats, however, are siding with Buckley. Not a single elected official in his party has condemned — or even disputed — his statement.

Despite repeated requests for comment over the past four days, Sen. Maggie Hassan and Rep. Chris Pappas have remained silent about Buckley’s description of New Hampshire parents as potential murderers. The Democratic candidate for governor, state Sen. Tom Sherman, has also refused to comment.

Former state party chair Kathy Sullivan took the effort even further, tweeting out that Buckley never made the statement at all and accusing NHJournal of lying.
Source: New Hampshire Journal

So disgusting that they’re accusing the right of politicizing the issue.

He really should answer for that and why he feels so comfortable siding with teachers instead of parents.

Adults telling kids to keep their discussions on topics that are related to sex “secret” from parents is Grooming 101, but now we’re all supposed to just accept it as “best practice” when it comes to so-called “gender identity” which is based in radical leftist gender theory.

The “kids will die!” if you don’t allow them to transition and put them on a path to sterilization and medicalization for the rest of their lives is both disingenuous and manipulative.

Studies have shown that even post-transition, many transgender individuals continue to suffer from mental health problems such as anxiety, depression, and suicidal ideation.

The “people will die!” is a tactic of the left to push you into agreeing with their policies…

We need to call it out when we see it.