The United Nations is now — and has always been — a gong show. But their latest ritual humiliation of Israel is obscene even by their low standards.

Remember, this same institution has done a really poor job of cleaning its own house: Scumbag Gets 15 Years For Raping 9 Different Victims … Worked For UNICEF

The UN has also demonstrated they really haven’t been very effective at deterring nuclear proliferation in situations where they have been specifically commissioned to do so, as evidenced by AP reporting from June 8, 2022.

Iran turned off two surveillance devices Wednesday used by U.N. inspectors to monitor the Islamic Republic’s uranium enrichment, further escalating the crisis over its atomic program as Tehran’s nuclear deal with world powers remains in tatters.
The move appeared to be a new pressure technique just before the International Atomic Energy Agency’s board of governors, meeting in Vienna, approved a resolution to criticize Iran put forward by Western nations. The censure deals with what the watchdog refers to as Iran’s failure to provide “credible information” over nuclear material found at undeclared sites across the country.
But Iran’s latest move, announced by state television, makes it even more difficult for inspectors to monitor Tehran’s nuclear program. Nonproliferation experts have warned Iran now has enough uranium enriched close to weapons-grade levels to pursue an atomic bomb if it chooses to do so. — AP

They can’t police themselves and they’ve sat on their hands while the world’s greatest state sponsor of terrorism inches ever closer to becoming nuclear-capable.

What’s their next step? Condemn Israel, of course!

Israel must dispose of all its nuclear weapons and place its nuclear sites under the International Atomic Energy Agency’s purview, the United Nations General Assembly’s First Committee stated in an initial 152-5 vote.
The five nations that opposed Friday’s resolution on the “risk of nuclear proliferation in the Middle East” were: Canada, Israel, Micronesia, Palau and the United States. Another 24 countries abstained, including European Union members. –JerusalemPost

Ok, let’s back up a moment here.

Israel — surrounded by hostile neighbors — has been deliberately coy about answering any question about whether or not they have actual military-grade nuclear capability.

One thing we CAN say about Israel that makes it different from, say, Iran is that they have no history of publicly calling for the genocide of a neighbor. They do not have national holidays in which they chant anything like Death to America or Death to Israel.

Furthermore, Israel is one of the few nations to have never signed the nuclear non-proliferation treaty. By ‘few’ we mean to say there are 191 signatory nations, including the great nuclear powers.

India, Pakistan and North Korea seem to be absent from the list of signatory nations as well. But do you know who IS on that treaty?

But the UN has turned its attention on Israel. Because that’s the UN’s favorite pastime, one for which Nikki Haley and Un Watch’s Hillel Neuer have long been calling them out.

The resolution notes that Israel is the only country in the Middle East and one of the few among the UN’s 193 member states, which has not signed the Non-Proliferation of Nuclear Weapons Treaty (NPT).
Iran, which is a signatory to the treaty, is believed to be on the path to developing nuclear weapons. Despite this, the resolution did not mention Iran.
The resolution reaffirmed “the importance of Israel’s accession to the NPT and placement of all its nuclear facilities under comprehensive international atomic Energy Nancy safeguards, in realizing the goal of universal adherence to the Treaty in the Middle East.”
It further called on Israel “to accede to the Treaty without further delay, not to develop, produce, test or otherwise acquire nuclear weapons, to renounce possession of nuclear weapons and to place all its unsafe guarded nuclear facilities under the full scope of Agency safeguards as an important confidence-building measure among all States of the region and as a step toward enhancing peace and security.” — Jerusalem Post

Such a treaty is only as good as the word (and goodwill) of the people who signed it.

The Imam of Peace came back with the natural response to any ridiculous idea — ridicule. 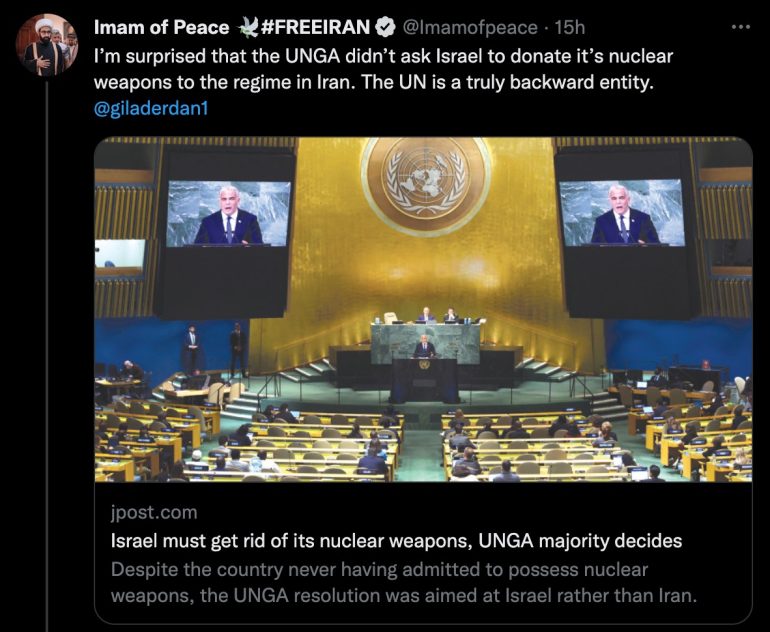 Is it finally time to reclaim that primo property in New York City that this Clown World organization occupies and put it to productive use?