Just a couple of years ago, BLM was on top of the world. Now? Not so much.

At the height of the George Floyd riots, BLM was the bandwagon everyone jumped on to authenticate their love and concern for the Cause Of The Day.

Corporations chipped in millions in donations to show that they were on board.

Sports teams made a point of bending the knee.

Celebrities did not want to be left out of the ‘fun’ either.

That was when ‘BLM’ was more associated with the phrase ‘Black Lives Matter’ than the phrase ‘Buy Large Mansions’.

When the scandals started rolling in and we got to see just how little of the money that was raised went to help the causes they claimed to care about. Hardly any trickled down to the local level. But there was no shortage of cash available for keeping the founders living large and giving them a millionare’s lifestyle.

It had served its purpose well in rallying public opinion against a sitting President, but BLM was no longer the darling of the left.

Fast forward to this week when Kanye showed up in Paris with Candace Owens. They were both sporting White Lives Matters shirts.

In fact, the 45-year-old rapper recently doubled down on his criticism of Black Lives Matter in a Tuesday Instagram story.
“Everyone knows that Black Lives Matter was a scam,” he declared, seemingly referencing the group’s multiple multimillion-dollar scandals. “Now its over You’re welcome.”
The Chicago-born rapper was addressing the controversy that began after he donned a T-shirt emblazoned with “White Lives Matter” while staging a surprise Yeezy fashion show that showcased his Season 9 clothing line… –NYPost

Sharon Osbourne was asked about it by TMZ.

Sharon Osbourne agrees with Kanye West that Black Lives Matter (BLM) is a “scam” and would like her six-figure donation back. Please.
The former The Talk co-host revealed her lack of faith in BLM when TMZ asked her about the rap icon’s recent public displays from his White Lives Matter t-shirt to his social media tirades questioning the work and intentions of the social movement.
“Well, we gave $900,000 to [Black Lives Matter], and I’d like my money back please,” she told a reporter from the entertainment outlet. — Breitbart

It only seems fair: If BLM made promises but didn’t make good-faith efforts to deliver on them, the money should be returned to the donors. 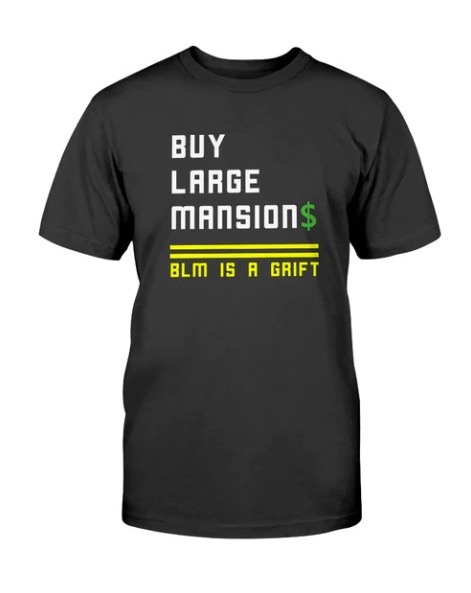