If Biden’s Democrats claim to care about armed criminals causing chaos for ordinary law-abiding Americans, they should begin by securing the border.

The neglected security at Bidens Broken Border is emboldening the criminals who have defacto control over ‘security’ of the US-Mexico border.

On Saturday, one armed suspect was shot dead by Border Patrol.

On Saturday, Border Patrol shot and killed an armed suspect in the Yuma Sector.

These are the threats our agents deal with everyday.

As Governor, my job will be to make their jobs easier.

That starts with giving these agents the resources they need to protect this state. pic.twitter.com/qDIhykJ58V

Nor is this an isolated incident. On Monday, Border Patrol reported encountering four armed men near the San Ysidro Port of Entry.

U.S. Border Patrol agents recovered four AR-15-style rifles last week after encountering several armed migrants who dropped their weapons and escaped from law enforcement to Mexico, authorities said.
The incident occurred Tuesday around 4:50 p.m. along the international boundary deep in the San Ysidro Mountains, located approximately 12.4 miles east of the San Ysidro Port of Entry and approximately 0.3 miles north of the international border, U.S. Customs and Border Protection stated in a news release Monday.
Border Patrol agents were on duty when they came across four individuals carrying AR-15-style rifles and loaded high-capacity magazines, according to CBP. The armed men dropped their weapons and headed south toward Mexico. — KSWB San Diego

Is that the whole story?

FoxNews seems to have included a detail that the local TV source seemed to overlook.

These guys with the high-capacity magazines aren’t just crossing the border– they brought a group with them. They were, in all likelihood, human smugglers, also known as coyotes. 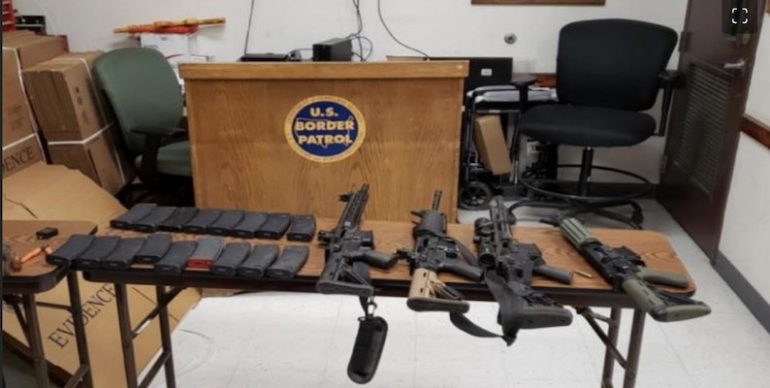 This is how brazen they’ve become. They are bringing not just illegal immigrants, but also weapons — and a LOT of ammo — across the US border.

It’s time Trump got an apology from the media. There really ARE bad hombres coming in over our border.