For two years Dems have been running wild. There have been no meaningful political checks on their power. Worse still, Big Tech and the Media did a great job of running interference.

But the deck has been shuffled and the game has changed. Direct documented evidence of the cozy relationship between the White House and big tech has been the foundation for an interesting lawsuit launched by some of the states.

At the same time, Elon Musk has taken Twitter private and commenced with wholesale firings. Any convenient incestuous relationships that had been developed between the White House and Twitter are suddenly worthless. (The also have the potential of exposing an embarrassing paper trail.)

This, together with the loss of Nancy’s gavel, complicates federal plans that were being formed to use ‘misinformation’ as an excuse to suppress any speech of the sort that Washington insiders might not approve. (Example: the active suppression of opinions about COVID — some of which later proved true — that ran afoul of offical DC talking points.)

When Trump, still a sitting President, was unceremoniously thrown of not just Twitter, but EVERY online platform in a coordinated purge, the left didn’t bat an eye.

They all nodded sagely with the agreed-upon talking points that if you don’t like the free speech rules under which a private corporation operates, Trump was free to build his own social media company.

That is, in fact, exactly what he did.

But now that Twitter isn’t working as a leg-breaker crushing opposition the Democrats find distasteful, they have changed their tune. Dramatically.

Senator Ed Markey seems to be taking the change in ownership VERY personally. 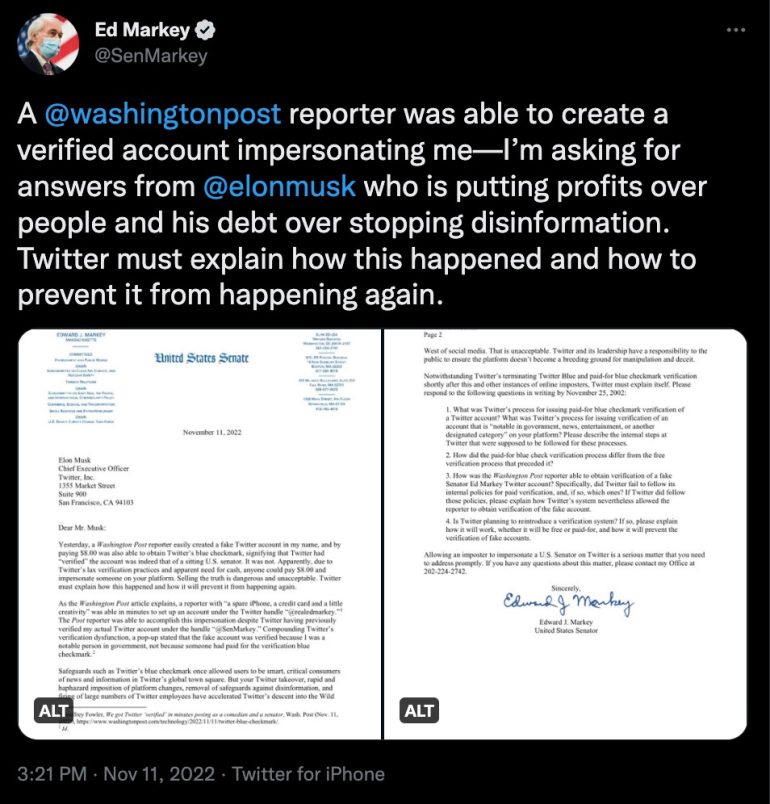 Which Elon responded to with his usual puckish manner [note, PP = profile pic]:

This wasn’t the end of the conversation. Markey had more to say.

Yikes. Somebody’s got himself a God complex.

But you will notice it isn’t Twitter he’s angry at, right? His ‘rage’ is directed specifically at this new threat to the Big Tech information hegemony.

I previously reported how Sen. Ed Markey (D-MA) targeted Elon Musk after someone impersonated Markey on Twitter. Markey threw a fit at Musk, holding him to blame. But it turned out that the person who “impersonated” Markey was a Washington Post reporter who had done it with Markey’s permission. So essentially, Markey had colluded with the reporter ahead of time and then used it to try to attack Musk to push restrictions on speech on Twitter. He’s lucky that neither he nor the reporter was suspended for the creation of the fake account since there are consequences for impersonation, including suspension. –Red State

So his entire complaint was a manufactured crisis from the very beginning, during a time when any idiot can see that Elon is currently got his hands full switching from the old way of doing things to … whatever comes next.

Days later, this ‘problem’ has gained legs. Markey even went on TV to invite the public to share in his faux outrage.

.@SenMarkey threatens @elonmusk: "You cannot ignore what the federal government is requiring of your company, and that goes for … guardrails that have to be built around social media … They will pay a price if they don't put safeguards in place at Twitter" pic.twitter.com/HkQLNmN01Q

What was it Lord Acton said about power, especially absolute power?

Most of us know this part: ‘Power tends to corrupt and absolute power corrupts absolutely.’ But there was more. A little further on he adds, ‘Despotic power is always accompanied by corruption of morality’.

If the hard-left lurch on an almost perfectly-divided House and Senate doesn’t describe ‘despotic power’ in our context, it would be hard to imagine what would qualify.

One wonders how much differently Markey would have turned out if he’d only had access to a book like this one when it could have still done some good.