Pennsylvania Senator-elect John Fetterman looks like the third wheel at his own Senate orientation.

The newly-elected Senators arrived in Washington, D.C. this week for an orientation.

The press appears to have fallen in love with the Shrek clone with a penchant for hoodies that won the Pennsylvania Senate seat.

The Partisan Presstitutes are quick to shout questions at Fetterman who appeared in D.C. wearing a suit with his wife Gisele at his side.

He didn’t answer when I asked if he’ll be able to wear his hoodie on Senate floor. pic.twitter.com/MwOQXUAZV5

Kinda weird that he brought his wife to work with him on his first day, isn’t it? Perhaps that would have been a better question to ask than the one about the hoodie.

But Fetterman’s advisor Rebecca Katz quickly responded to the Tweet saying that the press can’t just shout out questions to the newly-elected Senator because he can’t understand them.

Two things we need to get out of the way:

1) John Fetterman has a suit and will wear it to the Capitol.

2) He is still recovering from a stroke and has lingering auditory processing challenges. The way Hill reporters are used to yelling questions at Senators will not work here. https://t.co/0UCe47d9QC

The Washington correspondent for the San Francisco Chronicle asked if there was a way for reporters to pose questions to Fetterman by perhaps writing them down for him.

Would it be helpful to have qs written down and allow him to read? Or is he not going to take hallway qs while he recovers?

See, they don’t get that Fetterman is just a rubber stamp for the Democrat agenda and will vote how Senate Majority Leader Chuck Schumer tells him to. Having him understand things is completely irrelevant.

Actually, the Press likely does know this — they’re just running cover for him to make him look like a legitimate lawmaker when he’s just a puppet who is suffering from neurological damage after a stroke.

The Press is going to great lengths to not call it brain damage.

This is what was so insidious about what @karaswisher did. She knew she was lying about his condition. She did it anyway because "muh senate" and she created a mob to go after Dasha Burns who gave an honest journalistic analysis. Kara Swisher is the problem.

"Tammy Duckworth has brain damage" continues to be a take.

But it looks like his health won’t be his only concern… someone seems to be waiting in the wings to swoop in if he can’t do the job as Schumer’s rubber stamp.

Laura Ingraham has a new segment on her show called, “Mr. Fetterman Goes To Washington” that will chronicle Fetterman’s new career as Senator.

Fox News didn’t crop the photos, they were posted by Gisele Fetterman just like that.

Is it just me or does this look like a bad reboot of The Addams Family? You’ve got Uncle Fester and Morticia right there and perhaps that’s Gomez waiting in the wings…?

Side note: This will happen… pic.twitter.com/uKqkwTyCvm

Look, we know it’s not nice to pick on a guy who had a stroke, but, in the words of fellow mush-head Joe Biden, “Come on, man!”

The fact is, Fetterman had a stroke, hid how bad it was, and left his name on the ballot. We could’ve been talking about Connor Lamb for the last several months, but Democrats backed and elected a vegetable. After the crap that the Left did mocking Trump, they don’t get to lecture us about decorum and decency for mocking their side for electing this turnip:

I regret to inform you that John Fetterman makes TikToks. pic.twitter.com/9VaTuVSYiX

That man is somehow a Senator now.

And the Left just seems to adore this guy.

It doesn’t seem to matter that his parents carried him financially just a few years ago and that his blue-collar image is all just a sham.

Or that he pulled a gun and held it at the chest of an unarmed black jogger after hearing fireworks going off.

Remember when John Fetterman thought he heard gunshots, hopped in his truck, came across a random, innocent black guy who was simply jogging, chased him down, pointed a shotgun at him, and then lied about pointing the shotgun at him? pic.twitter.com/GGRbkNzgea

It’s also irrelevant that he’s unable to speak coherently after his stroke because he’s suffering from what his team calls an “auditory processing disorder.”

Fetterman apologists in the media even attacked a reporter who dared to be honest that the guy couldn’t manage small talk before the device-assisted interview.

NBC reporter on her interview with John Fetterman: “In small talk before the interview without captioning, it wasn’t clear he was understanding our conversation.”

NBC reporter on her interview with John Fetterman: "You'll see he has a screen in front of him that is transcribing my questions as I ask them."

"Once he can read, he can fully understand what I'm asking." pic.twitter.com/sdRBEj56qh

Then there was the memorable opening of the only debate that he had a month after early voting was underway.

But it’s okay… it’s not like Senators need to be able to debate issues, right?

None of that matters.

Heck, to some Democrat talking heads, Fetterman could be President one day!

There you have it!

The most insane take in Mainstream Media History…@KatyTurNBC ACTUALLY hints at Fetterman running for President! pic.twitter.com/6qlKyBH9Rk

I guess having barely-coherent Joe Biden has lowered expectations of what a President should be.

But Katy Tur might have her heart broken — John Fetterman might not be able to keep his wife’s claws off of his Senate seat for very long.

After all, she’s already cutting him out of the picture.

John Fetterman likes hoodies, but he probably wouldn’t like this ClashDaily Exclusive “Don’t Be An Ass” 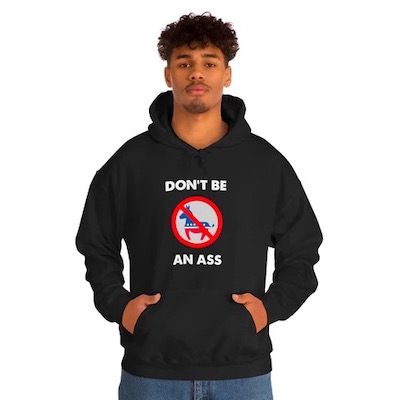