For years, we have seen activists dressed in black who aren’t shy about using violence to accomplish left-wing political agendas. They have often marched, so to speak, under the banner ‘Antifa’.

There was a time, before the left got their official talking points squared away, that talking heads on ‘reputable’ news outlets defended Antifa and any other black-block copycats.

Disgraced CNN hacks like Don Lemon and Chris Cuomo were at the top of the heap.

Here are just a few of the many stories ClashDaily has covered about Antifa over the years. Feel free to use the site’s search feature to look up the rest. There are a LOT more than what you see here:

Sometime before the 2020 election, however, Democrats got their talking points sorted out. We started hearing from the politicians, the media pundits, and ‘subject matter experts’ brought onto TV that there was no such thing as Antifa.

There is no ‘group’. It’s not accurate to call them ‘organized’. What the right calls ‘Antifa’ is just a bunch of de-centralized individual local activist groups each doing their own thing.

Right. If you replace the word Antifa with Al Queda, you’ve just given a fine description of how sleeper cells work, including plausible deniability and decentralized leadership in the furtherance of an extremist agenda.

But every so often, the truth of the matter rears its ugly head.

We saw it in the story above where 10 Antifa activists were arrested for violence.

We saw it in the murder of a Trump supporter

We see it again in a knife attack conviction today.

Now-convicted violent felon, Alexander Stokes Contompasis, was a New York #Antifa member & Antifa journalist with a long history of violence across state lines. Consistent with #Antifa's ideology, he believed it was his duty to carry out deadly political violence against others. pic.twitter.com/bzfxhEU73g 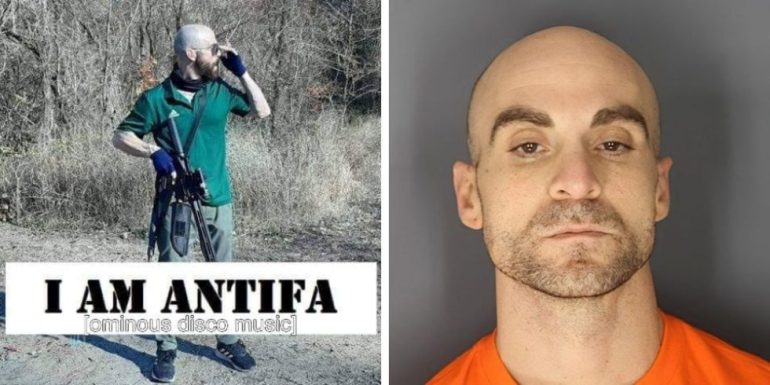 A judge sentenced Alexander Contompasis to 20 years in state prison Thursday, telling him “toxicity in the body politic” fueled the defendant’s stabbing of two members of the far-right Proud Boys group during a “Stop the Steal” rally outside the state Capitol on Jan. 6, 2021.
In a packed and deeply divided courtroom, acting Supreme Court Justice Roger McDonough told the 39-year-old Contompasis that he can only conclude that the defendant went to the Capitol “ready, willing and able” to inflict violence on political opponents.
“That’s exactly what the defendant did. He violently, brutally stabbed political opponents of his — one of whom he eviscerated,” McDonough said, as Contompasis sat next to his defense attorney, Jasper Mills. “This wasn’t just a simple stab or an accidental stab or a ‘poke’ as the defendant attempted to describe it in his testimony. These were violent knife attacks.”
…”Independent journalists don’t carry knives,” the judge said. “This defendant did.”
The judge said he believed Contompasis showed no remorse for injuries he said could have led to murder. — TimesUnion

Our intrepid FBI has gone all-in looking for threats to democracy. They are convinced that Trump-voting white racists are a dangerous menace requiring the full mobilization of law enforcement. And yet somehow… the people who get caught throwing firebombs into crisis pregnancy centers, or dressing all in black and assaulting police officers, or who nearly overran the White House the day that Secret Service agents instructed the First Family to take shelter never seem to warrant a whisper of concern.

(For some ‘mysterious’ reason.)

It’s almost as if someone in a position of authority is happy to look the other way so long as the ‘correct’ political cause gets moved forward.

Civilian rioters in service of a cause, and a police state willing to look the other way. For a party that loves to throw around Hitler comparisons so freely, they might want to consider how similar this tactic is to the one employed in ‘The Night Of Broken Glass’.

For anyone still holding to some faint hope that Antifa’s violence is a rare outlier and not part of the agenda, here are few more data points to consider: