And just like that, Mitch McConnell reminded the party faithful exactly why some object to his brand of leadership in the first place.

Remember back in 2018, when Schumer saw that the House had just passed a budget that would hve built the wall and he didn’t have the votes to block it? He played hardball and forced a government shutdown so that the bill would die and they could start over with Nancy holding the gavel in January.

Schumer took that seriously, and after two years of Biden throwing open the border it is clear to everyone where we stand now: After Two Years Of Biden’s Broken Border, Schumer Finally Admits Their REAL Agenda

Here in 2022, today’s situation perfectly mirrors the one where Schumer shut down the government push his party’s agenda.

McConnell is going to war.

Don’t misunderstand what we are saying here.

He is NOT going to war against the Biden/Pelosi/Schumer hardest-of-hard-left agendas. In fact, he is reportedly in private negotiations with Schumer to extend the budget for another year.

Senate Majority Leader Chuck Schumer is working with his Republican counterpart, Minority Leader Mitch McConnell, on a yearlong government funding bill in the hopes of passing it before the next Congress convenes in January.
Schumer told reporters on Tuesday that negotiations were ongoing, despite strong disagreement among Republicans and Democrats over funding priorities.
“Leader McConnell and I have agreed to try and work together to make sure we get a yearlong funding bill done,” said Schumer, D-N.Y. “We hope it can be done this year, and we know that each side is going to have to give in order to send an omnibus to the president’s desk, and, of course, it needs 60 votes.” — McConnell

You know Schumer would never have agreed to letting the other party lock in spending for a whole year when his side was about to get the gavel in a few more weeks. A funding bridge to February should be the red line MAXIMUM of what we offer — and we should expect a LOT in exchange for it… including restoration of the wall funding.

To do otherwise would forfeit ANY of the ‘power of the purse’ the next Republican leader could have to hold in check the worst impulses of a Rogue senate and an Executive branch that is completely out of control.

But that isn’t a hill McConnell seems ready to die on.

Neither was the new bill on same-sex marriage. It might seem harmless enough on it’s face since it doesn’t alter the current SCOTUS ruling.

What concerns many is the fact that explicit language forbidding the IRS from targeting, harassing, or even stripping charitable status from religious organizations whose beliefs clash with the ‘acceptable’ beliefs about same-sex marriage was shot down after being opposed by every Democrat.

What hill IS McConnel willing to die on?

He has been poisoning the well against any Republican with the MAGA brand — including Trump himself — and he doesn’t seem to care if he has to lie to do so.

Here’s the preening speech he made denouncing Trump while parroting all of the favorite talking points of CNN and Schumer about the much-ballyhooed Mar-A-Lago meeting with Kanye West.

Clearly, this is an opportunity for Mitch to damage the brand — and potential electability — of a candidate with whom he has had some very dramatic policy disagreements. Perhaps the McConnell family’s business ties to China that Peter Schweizer writes about have colored his judgment.

First off — the main idea is correct: there IS no room for racism in the Republican party. It’s the OTHER party that has spent their entire history putting race issues at the core of their platform… from slavery, to KKK, to Margaret Sanger’s eugenics, and now with the racially-divisive efforts to divide all Americans into categories of either ‘oppressor’ or ‘victim’ in order to create artifical and endless conflict between them that only an elected liberal political savior can use big government tools to ‘fix’.

But to jump from ‘Trump had dinner with Kanye’ to ‘Trump is a bigot’ is to play the left’s cancel-culture game of accepting a verdict without a trial. So much for the ‘innocent until proven guilty’ aspect of American culture.

We’re not rally interested in that meeting with Kanye. Not until the media has something to say about THIS photo of Obama and the Congressional Black Caucus posing with Louis Farrakhan… 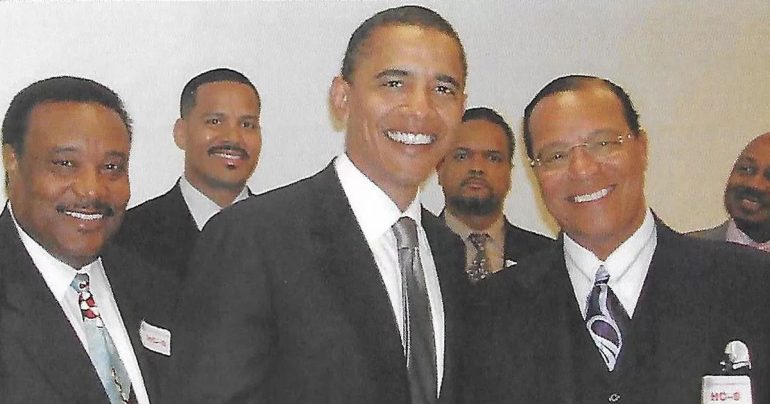 Farrakhan is FAR more ‘problematic’ than even the worst offenders people might associate with the right. But he — and his left-wing supporters — get a free pass on stuff like this even from people like McConnell:

Mitch was asked point-blank if he would support Trump if he won the nomination. The wording of his answer makes it appear that McConnell accepted as unchallenged fact the claim that Trump is supportive of anti-semitism and white supremacy… without any regard for that being the very same broad brush ‘bigot’ allegation that EVERY Republican, including Mitch himself, has been painted with for years if not decades.

Remind me, when was the last time you heard him make a speech similarly denouncing any Democrat? That’s hardly surprising for a guy who propped up Murkowski — who in turn endorsed a DEMOCRAT in Alaska — against the challenger to her right.

Did you hear him denounce, say, Senator Warnock in similar language? After all someone currently in a Senate race has a Farrakhan problem…

Here’s what’s wrong with McConnell’s denunciation of Trump. He got some key facts wrong.

–@Ye says dinner with @realDonaldTrump was scheduled before "death con" tweet, postponed after midterms
–@Ye says Milo reached out to him after the tweet
-Milo says he brought Fuentes into the conversation
–@Ye confirms Trump had no idea who Fuentes is

Mitch has made up his mind that he will try to pick winners and losers in the Primaries — as if that is the job of one elected senator from Kentucky rather than the combined will of ALL Republican voters.

The problem is, if Trump DOES win the primaries, McConnell’s statement will be picked up by every Democrat talking head as ‘bipartisan opposition’ to Trump and those MEGA-MAGA voters Joe has been slandering with precisely the same baseless slurs he is advancing to damage the Trump brand.

As anyone listening to Mark Levin’s show could tell you, McConnell has a LONG history of being friendlier to the center-left than he has been to the Freedom and Constitution wing of the party.

There was a list of examples of McConnell opposing pushes to small government and freedom. He opposed Ted Cruz and the Tea Party. He backed Bush over Reagan. Sadly, Reagan was apparently his 4th choice among the 1980 contenders.

Maybe THAT explains why his Republicans keep striking deals with a Dem party that treats a 50-50 Senate and the narrowest House lead in years as if it were a mandate from Heaven to put a boot on the throat of the Republicans and take the country on a hard-left lurch straight into a ditch.

I guess you can be pretty smug about your grip on power when you can hold the threat of multi-million dollar-backed primary opponents over the head of any Senate Republicans who don’t dance to his tune. Although, even THAT leverage is starting to wear thin.