Dollar Store Rachel Maddow has lost it. Either that or the Dems are desperate. Maybe it’s a bit of both.

MSNBC host Chris Hayes made the most insane Blue-Anon argument to vote for Democrats in the midterms on his show on Thursday.

Hayes was explaining what Democrats mean when they say that “Democracy is on the ballot” in 2022.

“What they’re really saying is, ‘If you don’t elect us this time, if you don’t keep them out of power, you may never be able to elect us again.’ Or in short, ‘Vote to preserve your right to throw the bums out,’” said Hayes.

.@chrislhayes on what Dems mean by 'democracy is on the ballot':

"What they're really saying is, ‘If you don't elect us this time, if you don't keep them out of power, you may never be able to elect us again.’ Or in short, ‘Vote to preserve your right to throw the bums out.’" pic.twitter.com/VgakHBnw6p

Of course, this is an absolutely batcrap-crazy argument.

“Vote for your right to ‘kick the bums out'” is just bizarre fearmongering from the left that knows it’s going to have its @$$, its legs, and half of its torso handed to it on November 8.

Besides, “throwing the bums out” is precisely what voters seem to be doing right now.

Hayes doesn’t want you to “throw the bums” out just because you dislike the way that their leftist policies have:

That’s no reason to “throw the bums out” according to Chris Hayes because the “Mega MAGA Republicans” are super secret authoritarians that will destroy democracy in America!

The only evidence for this seems to be: a) questioning the results of the 2020 election where rules were changed by Democrat legislators to make it easier to vote (and to cheat) and counting went on for days under questionable circumstances; and b) the same sorts of voter integrity laws like the ones implemented in Georgia and smeared as Jim Eagle/Jim Crow 2.0 by Dems and the Partisan Presstitutes — you know, the laws requiring ID and cracking down on electioneering — that have resulted in… *checks notes*… record early voting in Georgia. Huh. Weird.

Remind me, which party is calling the other one “semi-fascist”, working with Big Tech to silence opposition, and going after peaceful pro-life activists and proteters while ignoring the violence perpetrated by those on their side? Because that seems like actual authoritarianism to me.

As usual, MSNBC is it’s own little fantasy land that has no resemblance to reality.

Hayes says that he loves that old “no gods, no masters” lefty line — of course he does! Because the lefties want to be the masters.

He compares voting for the GOP to the Iranian theocratic regime… geez, is he high?!

To paraphrase… “In order to preserve democracy, you need to keep one-party rule until the party in power says it’s safe to vote for the opposition.”

Hayes isn’t the only one making the argument that a vote for Republicans is a “tHrEaT tO dEmOcRaCy” in the United States forever, Salon senior writer Chauncey DeVega made a similar argument in a piece that is so stupid it’s shocking that it made it past an editor.

Is America ready to trade democracy for cheap gas? That's fascism in a nutshell https://t.co/omBndAlduk

Conservatives were quick to point out the flaws in the argument Hayes was making.

The rhetoric from the left leading up to this election is absolutely unhinged. https://t.co/cWLbdBpHAw

The bottom of the idea barrel, it has been scraped. https://t.co/gOv4cj43s1

We all know this is just massive BlueAnon cope ahead of the Red Tsunami that’s headed their way.

"Sure we suck and you don't like us but if you don't vote for us you won't be able to vote for the other guys next time" is a new stage of coping previously unknown https://t.co/sJRiQjSOFV

There’s an inherent flaw in this argument that the Dems haven’t thought of yet… what if it’s a “red wave” and democracy remains intact? Who will be able to believe a single thing that these psychos say?

What if the Republicans win in the midterms and democracy doesn’t end? Everyone is going to look like idiots! Oh no! https://t.co/BBgRdShJtm

Well, in his defense, he did put it out on Elon Musk’s Twitter, and I’m sure everyone other than his dedicated audience is taking it super seriously.

Hayes doesn’t even realize that he’s making an argument to vote for the GOP.

Wait. So you're saying if I don't vote for the Democrats now, they'll go away?

"If you vote for Republicans they will vanquish Democrats forever" sounds like a pretty decent reason to vote Republican. https://t.co/LrmJCYe1m9

No, we're going to prove it's a democracy by taking your bums out of office. https://t.co/JxoOq2Z8BV

Watching Chris Hayes cope on Tuesday night is going to be awesome.

Make sure you do your part to make the Red Wave happen. Get out there and vote. If you can, bring your neighbors, family, and friends to go vote, too.

Get ready for the Red Wave with our ClashDaily Exclusive “Mega MAGA Red Wave” Tee. 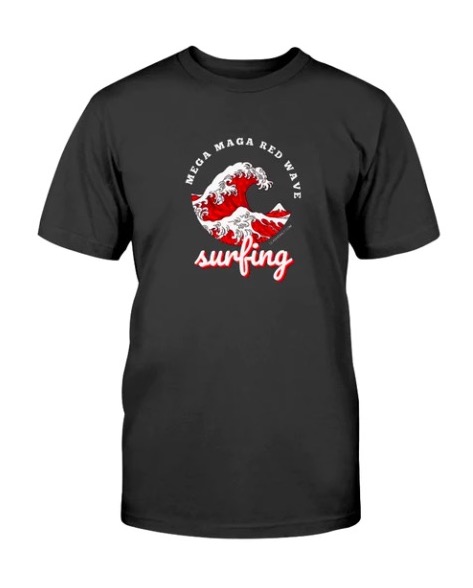