Living in the West makes it easy to forget that not everyone lives in a country where the people have some degree of influence on their government.

When the West criticizes China, as a political entity, it’s important to remember that the Chinese Communist Party — the unopposed ruling party of China — represents a very small percentage of China’s total population.

The remainder of China’s citizens live under a regime with both the authority and the means to dictate the minutest details of their everyday life.

This is what made media and Dem allegations that the lab leak theory was rooted in racism so disingenuous. The criticsm was not leveled at the ordinary Chinese citizen — the original and ongoing victims of the tyrannical policies of the CCP — but of the regime itself.

The White House’s COVID-19 response coordinator Ashish Jha said that the Chinese Communist Party’s (CCP) “zero-COVID” strategy is unrealistic amid the largest protests across China in decades.
Thousands of demonstrators came out in Shanghai, Beijing, Urumqi, Wuhan, Chengdu, and other major Chinese cities over CCP-mandated lockdowns, mandatory COVID-19 tests, mask orders, and other rules. The CCP officially has pursued a “zero-COVID” policy for months and has shown no signs of stopping.
In some areas, protesters chanted: “Xi Jinping! Step down! CCP! Step down!” Police in Shanghai, Beijing, and other major cities were called in to break up the demonstrations.
“I think it’s going to be very, very difficult for China to be able to contain this through their zero-COVID strategy,” Jha, who was a Newsmax contributor before he was named to his White House position, told ABC News on Sunday in response to the unprecedented protests in China. “We don’t think that’s realistic, certainly not realistic for the American people,” he added.
Jha then claimed that vaccinations “particularly for the elderly” are the “path out of this virus.” He continued, “Lockdown and zero-COVID is going to be very difficult to sustain.” — EpochTimes

The White House may be seeing this situation through their obsessive fixation on vaccines and the Coronavirus, but the Epoch Times evidently has a clearer view of the situation that the White House, because they included the critical context:

…thousands of demonstrators… *list of cities* … various draconion orders … calls for revolutionary regime change … plus one item not mentioned in that list, the symbol of this revolt: blank sheets of white paper…

In a police state with AI-enhanced surveillance tech, digital currency that can be frozen at will, and a hearty willingness to use whatever force is necessary to destroy political dissent, staging an open protest of any kind is the kind of genuine moral courage that our current crop of Western slactivists can only pretend to embody.

The problem that his the people incensed isn’t that Beijing has chosen lockdowns over vaccines, the problem is that the Chinese citizens have had Beijing’s boot on their necks long enough that they are willing to risk everything in order to demand relief.

The catalyst for this round of protests can be traced back to a fire in a high-rise building where a disputed number of people died in the blaze because the government had welded their doors shut as part of the Covid lockdowns.

There are videos of the screams of the families burning in that building in Urumqi. This is the spark that lit the fuse of the protests across China

Even children were killed pic.twitter.com/cTSt6F5yXc

A woman who lost five family members in a deadly fire in apartment in Urumqi, capital of China’s northwestern Xinjiang region, is disputing the government’s death toll, as mass unrest over strict COVID regulations continues to rock the country.
Local authorities say 10 people were killed and nine were injured when a fire that took three hours to extinguish tore through a high-rise building in the city on Thursday evening. Many have questioned whether rescue efforts were hampered as a result of COVID restrictions.
…Merhaba Muhammad, 27, a Uyghur from Xinjiang now living in Turkey, lost her 48-year-old aunt, Haiernishahan Abdureheman, and her aunt’s four children, aged between five and 13, in the fire.
…She disputed the Chinese government’s official death toll, saying that five people in her family alone were killed.
“They’re lying that 10 people died. Because my aunt’s family has five people who died. Even when I was searching on social media, people in China and Uyghur people in Xinjiang, they said 44 people died. Maybe more than 44 people. I heard one mum who was really really crying. I just heard her voice, and she said ‘I lost my two children’. She was really crying a lot,” said Muhammad. –Newsweek

Here’s actual footage of the protests. Does this look like people who are concerned about virus policies or ruthless political tyranny?

This was such a brilliant video I subtitled it so more people can watch it. Beijing students' response last night to accusations that there are 'foreign forces' at play in this weekend's protests

'The foreign forces you are talking about – are they Marx and Engels?' https://t.co/umdFaVhz2s pic.twitter.com/RoohkFaZgE

This cartoon works because this portrays the same kind of political courage as what we saw with ‘Tank Man’ on June 4, 1989. 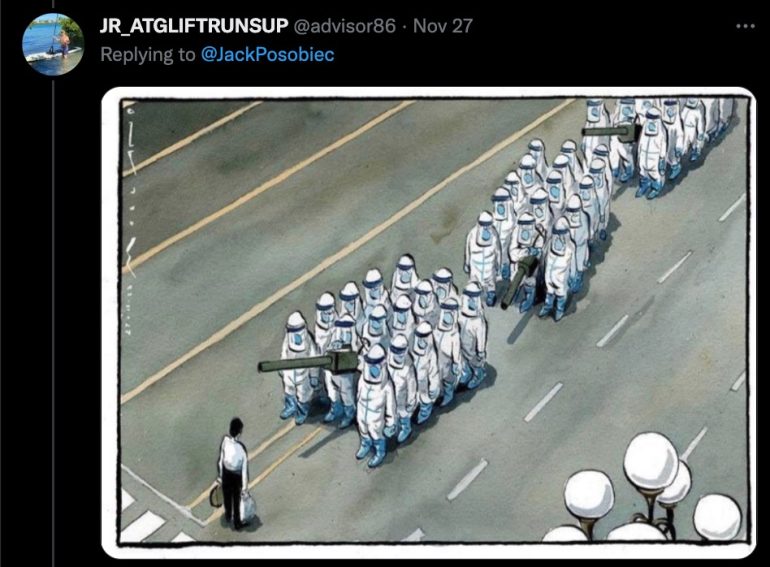 Police are already clamping down, but the protests are becoming international.

The broadcaster said on Monday that it was “concerned” over the arrest and treatment of camera operator Edward Lawrence, who it said was “beaten and kicked” in Shanghai on Sunday night.
“The BBC is extremely concerned about the treatment of our journalist Ed Lawrence, who was arrested and handcuffed while covering the protests in Shanghai,” a BBC spokesperson said.
“He was held for several hours before being released. During his arrest he was beaten and kicked by police. –Independent

Biden spends a lot of time thumping his chest about being a great defender of Democracy. Where is he now?

Sure, he’s throwing money and arms at the war in Ukraine (for reasons that, in light of the FTX scandal, may or may not have been related to the crisis itself).

But where is Biden in the midst of people’s uprisings around the world?

The trucker’s protest in Canada.

Oh, THAT’s right… Joe Biden DID play a role in that last one, didn’t he? Trudeau had infamously said he ‘admires’ how China’s ‘basic dictatorship’ can get things done, and during Canada’s Freedom Convoy Trucker’s Protest Biden leaned on him to take those feelings to the next logical step. Was Biden The ‘Bull Connor’ Behind Trudeau’s Freedom Convoy Crackdown?

This is the same Joe Biden that is normalizing relations with Venezuela’s lawless dictator.

Let’s remind him of that the next time he accuses the other side of being a danger to democracy.