We’ve seen one dishonest narrative after another in the endless attack against Trump whose blueprint was put into writing by Clinton Flunkie David Brock even before Trump had been sworn in.

The endless attacks and allegations were the means by which the left intended to disparage Trump in the public eye, and even after Trump has left office, we see that was no empty threat.

The J6 Committee inquiry was, in the view of many, this writer included, a ruse to gain insider knowledge into the Republican political machine, its key players, its donors — perhaps even donor lists — so that they could have a political advantage when it came time to campaign against them.

Information is power and there is a LOT of information to be gained in accessing Trump’s tax records. We’ve seen how shamelessly cynical people like Schiff have used their positions of public trust as a cudgel to whack their political enemies.

They are about to score a major win in gaining access to a new tranche of information which, in the hands of skilled political operators, translates into political power: the power to track transactions and relationships as well as information sources that can be used as a basis of attack (legitimate or otherwise) against Trump in his coming Presidential run.

We absolutely know the Democrats are not above such cynical stunts. They’ve used it before. Successfully even. Or do you not remember the attack against Mittens Romney?

Even HuffPo called Reid out on this one:

When asked about it three years later, you would think Reid would apologize or at least show the proper level of contrition that matches the irresponsible and undignified act of using the Senate floor to spread false allegations about a politician from the opposing party.
But Reid has no regrets. “I don’t regret that at all,” he told CNN’s Dana Bash on Tuesday in the interview clip above. “Romney didn’t win did he?”
So what mattered most to Reid was that Romney lost and Obama won. It’s one thing to try to gain a political advantage by pointing out certain undesirable aspects of an opponent’s background or record. But when a Senate democratic leader spreads baseless allegations without a shred of evidence, and uses the Senate floor to do so, that’s one step too far. And what makes it even more egregious is that Reid seems to be proud of his actions. — HuffPo, Ayobami Olugbemiga, 2015

Dems have been flaying him with endless J6 allegations for the last 2 years, as well as a death-by-1000-papercuts approach throwing everything but the kitchen sink at himself and his company, while trying to get people to flip against him to save their own skin.

Now they score a ‘Yuge’ victory in getting SOTUS to authorize the release of Trump’s tax records for ‘House Oversight’. Chuck and Nancy are likely dancing a jig, while Nadler and Biden must have been so excited they had to change their pants.

“The application for stay of the mandate presented to The Chief Justice and by him referred to the Court is denied,” the order states. “The order heretofore entered by The Chief Justice is vacated.”
The House Ways and Means Committee first requested six years of Trump’s tax returns in 2019.
Trump’s tax records are currently in the hands of the Treasury Department, which had held off releasing them pending final court action.
…It is unclear when the tax records will be turned over or what the Democrat-controlled panel will do with them now that Republicans have taken over the House majority. — FoxNews

FoxNews is obviously more willing to give Dems the benefit of the doubt than we are. But after watching these Machivallean knife-fighters in action for years, there is no evidence of good will or fair play on their part on which to base such a benefit of the doubt from where we stand.

In their haste to give this over, they have forgotten a very important thing: precedent.

With the gavel moving to Republican hands in just a few short weeks, Democrats are about to be exposed to oversight for the first time in 2 years.

Suddenly, this ‘House Oversight’ precedent of gaining access to presidential taxes could take on a whole new significance.

And if our theory that Hunter’s laptops weren’t actually misplaced so much as abandoned as a way to make evidence incriminating to the Biden family ‘go away’ is correct… we could see plenty of reason for Dems to curse their own decision to push for Trump’s tax returns.

Even more so if the depth of pay-for-play and corruption cuts anywhere near as deep as Senate Republicans who have been confirming these claims through original documents from bank records and other 3rd party sources claim it will.

And one last point to contemplate as we wrap up…

Republicans haven’t been shy about using the word ‘Conspiracy’ in describing the relationship between the Biden family and their partners.

Remember how the entire impeachment 1.0 debacle began? It began when Trump was looking into public statements made by none other than Joe Biden himself… who was not yet officially running for office.

Most of us have been focused on the Joe-Hunter-Burisma connection. But there’s another person implicated in that boast, isn’t there?

What did Joe say right before the infamous ‘sonofabitch, he got fired’ line?

Joe said his authority to withhold the aid was called into question because he’s not the president, and Joe said ‘Go ahead, call him’.

Maybe THAT explains why officials were so sensitive to any social media reference to the name George Soros when American Ambassadors in Ukraine were busted for improperly using surveillance tools to monitor the social media accounts of private American citizens including Dan Bongino, journalist John Solomon, as well as various members of Trump’s family and inner circle.

This could all been avoided if they’d followed the one rule on gear we’ve got at the ClashDaily store: Don’t Be An Ass. 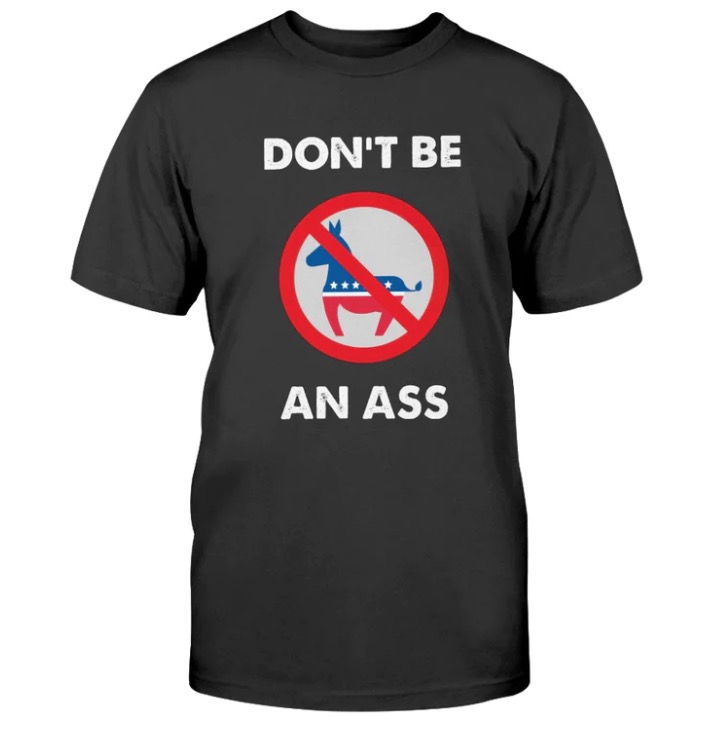 Our ClashDaily store has new content added all the time, and some great specials — especially with Black Friday approaching. Check back often.