The Canadian government is quite open that it is training members of the military “to conduct and supervise psychological operations.”

This shouldn’t be much of a surprise since this is probably pretty standard in militaries around the world.

The U.S. Army openly advertises training for PsyOps on its website:

The Canadian course listing (archive here) can be found on the Government of Canada website under the Department of National Defense’s education and training section. 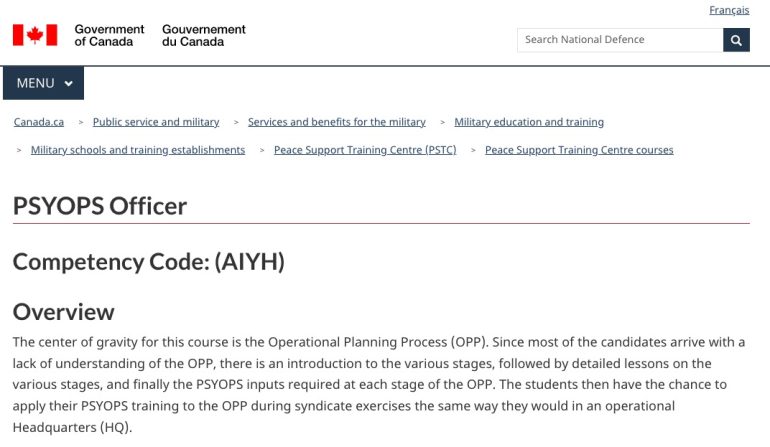 The Government of Canada website advertises several training courses for military personnel to specialize in PsyOps. 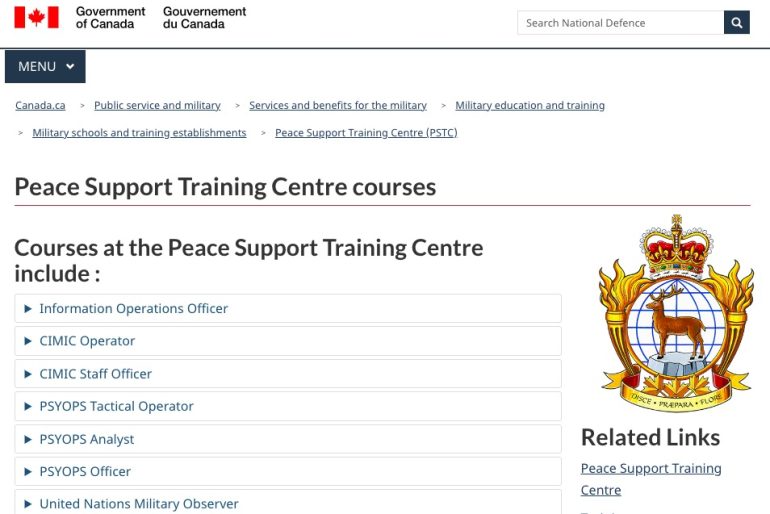 “Psychological operations” (PsyOps) is defined by Merriam-Webster as “military operations usually aimed at influencing the enemy’s state of mind through noncombative means (such as distribution of leaflets).”

“False flag” operations and that sort of thing would fall under the PsyOps category. Speaking of “PsyOps” check out our ClashDaily Store‘s “Corrupt FBI Collection”:

It’s probably getting attention for a few reasons: (a) it’s right there in the open; (b) this is Canada that we’re talking about; (c) Public Health in Canada was tracking Canadians throughout the pandemic without their knowledge — let alone with their consent; and (d) the Canadian military was caught using PsyOps campaigns on the Canadian public without government approval during the pandemic.

These last two are significant.

Toronto-based BlueDot was hired by the Public Health Agency of Canada to monitor cell phone location data for social distancing and quarantine compliance, and to track any other infectious diseases 'as needed.'

The Public Health Agency of Canada (PHAC) used anonymized cell phone location data to track social distancing and quarantine compliance during the pandemic. The term PHAC uses for anonymized is “de-identified” — which means it doesn’t pinpoint the locations of individual Canadians.

PHAC has extended the use of this “de-identified” cell phone tracking well into 2023 for things other than the COVID-19 pandemic according to a Global News report from January 2022 — just a few weeks before the Freedom Convoy rolled up on Parliament Hill opposing intrusive pandemic measures.

“As the COVID-19 pandemic unfolds in Canada and the world, analysis of location data continues to be an important part of the federal response. Beyond the pandemic mobility data will play an important role in understanding population movement impact on other public health challenges,” the document read.
“This data when combined with other data sources for analysis can generate important public health insights such as the ability to estimate (the) impact of public health outcomes and risk factors.”
Source: Global News

A Canadian Forces report in 2021 revealed that the Canadian military used the pandemic to test propaganda techniques on the Canadian public… without request or approval from the Canadian government which is required by law for any “information operations campaigns” used domestically.

The Canadian Armed Forces saw the pandemic as a “unique opportunity to test out propaganda techniques on an unsuspecting public.”

The federal government never asked for the so-called information operations campaign, nor did cabinet authorize the initiative developed during the COVID-19 pandemic by the Canadian Joint Operations Command, then headed by Lt.-Gen. Mike Rouleau.
But military commanders believed they didn’t need to get approval from higher authorities to develop and proceed with their plan, retired Maj.-Gen. Daniel Gosselin, who was brought in to investigate the scheme, concluded in his report.
The propaganda plan was developed and put in place in April 2020 even though the Canadian Forces had already acknowledged that “information operations and targeting policies and doctrines are aimed at adversaries and have a limited application in a domestic concept.”
Source: Ottawa Citizen

The PsyOps operations continued even after the military was told to halt them.

According to the report, the Canadian military “gathered information about Canadians’ online activities without permission from authorities.”

The Canadian military recently conducted four reviews of controversial initiatives. A copy of one of those reviews was obtained by CBC News under access to information legislation.
That review shows that even after the then-chief of the defence staff, Jonathan Vance, verbally called off the overall influence campaign in April 2020, some influence activities aimed at Canadians carried on for another six months — until Vance issued a written edict in November 2020.
“The public affairs, [civil-military cooperation] and influence activities that were taking place, particularly within [Joint Task Force Central], did not stop,” says the review document, which looked at the origins of the influence campaign.
The review’s conclusion is significant because Defence Minister Harjit Sajjan assured Parliament last year that the activities were halted almost immediately after they got underway. But a variety of problematic initiatives carried on for months after Sajjan made his statement, including a propaganda training exercise involving fake wolves in Nova Scotia.
The review document obtained by CBC News found that public affairs staff and members of the military’s Civil Military Cooperation section (CIMIC) didn’t catch the “ambiguity” and didn’t see the “obvious link” between what they were doing and what Vance saw as a violation of federal rules.
According to a directive released Wednesday by acting chief of the defence staff Lt.-Gen. Wayne Eyre and Sajjan’s deputy minister Jody Thomas, the military deployed propaganda techniques in Canada without approval during the pandemic and gathered information about Canadians’ online activities without permission from authorities.
Source: CBC News

And now the Canadian government is advertising its PsyOps training program.

Judging by how many masked and jabbed Canadians still live in fear of COVID this late in the game it looks like they’ve got one helluva successful program!