[CLICK HERE TO BROWSE]
The culture of death in Canada continues apace. It’s now expanding to bring children on board.

To be clear, the activity booklet with cartoon illustrations and a child-friendly font is not meant to push children to choose suicide, but it does normalize the process of medically-assisted suicide in a country that has government-run healthcare. The aim of the booklet is to help children understand the process when someone that they love has chosen assisted suicide.

In 2001 a group of end-of-life care providers from across Canada met to determine if a website could “address some of the national gaps in palliative care.” The result was the Canadian Virtual Hospice website. It is this organization that has published the activity booklet aimed at children ages 6-12. 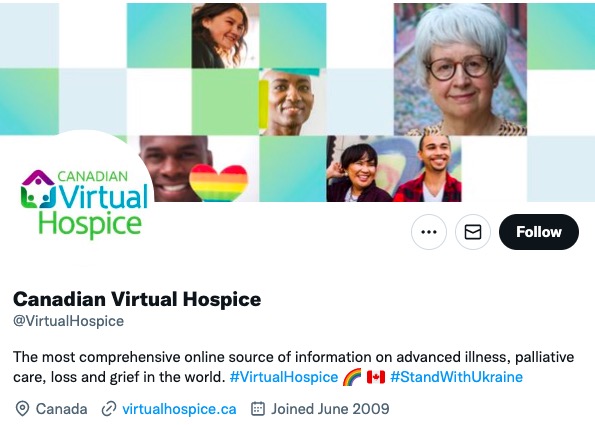 The account posted a link to the Activity book in July.

https://t.co/eZbZLrz4Bu is home to The Medical Assistance in Dying (MAiD) Activity Book! Created for young people who have someone in their life who may have MAiD, this resources if available for free download. https://t.co/ugopiHYWus pic.twitter.com/um13rVqItL

The 30-page booklet has a section for parents and includes resources for additional support. 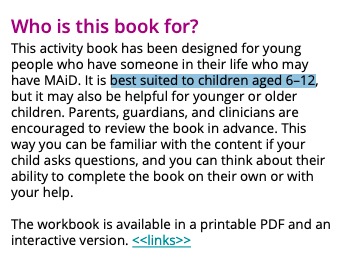 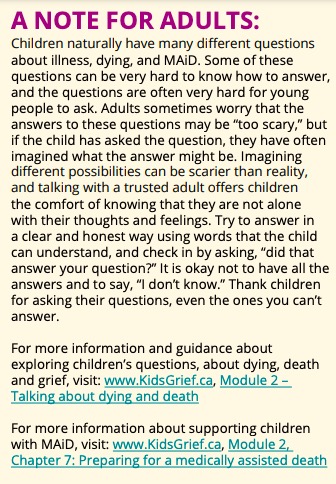 The first few pages explain that MAiD is the use of “medicines” are used to “help someone with their death.” It also explains that this is a personal choice and that you probably shouldn’t bother to try to convince the person to live because they’ve likely thought about it for a long time already.

It justifies and normalizes the concept of MAiD to children while giving a tepid acknowledgment that people can have different thoughts about medically assisted death.

Here are a few screenshots from the PDF. 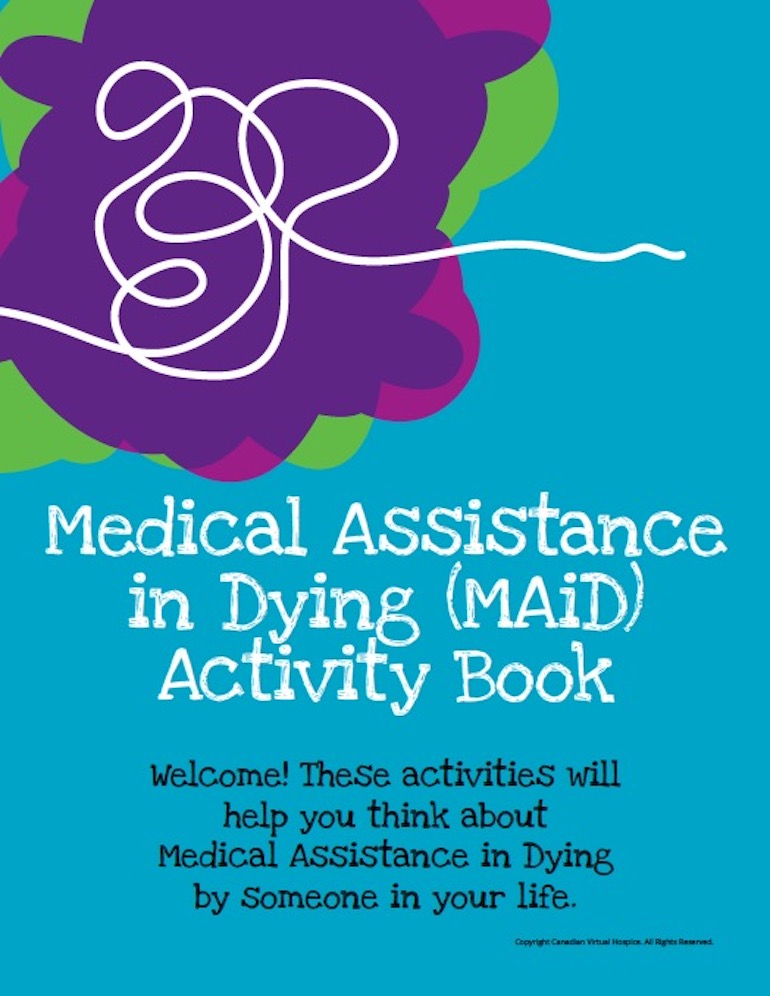 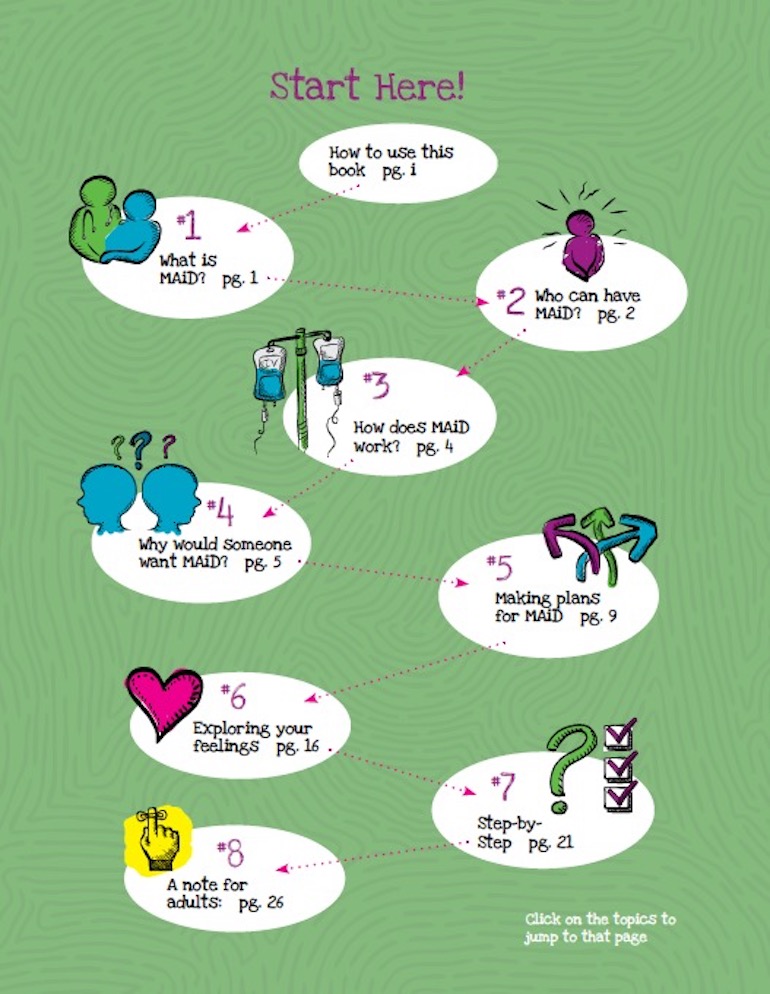 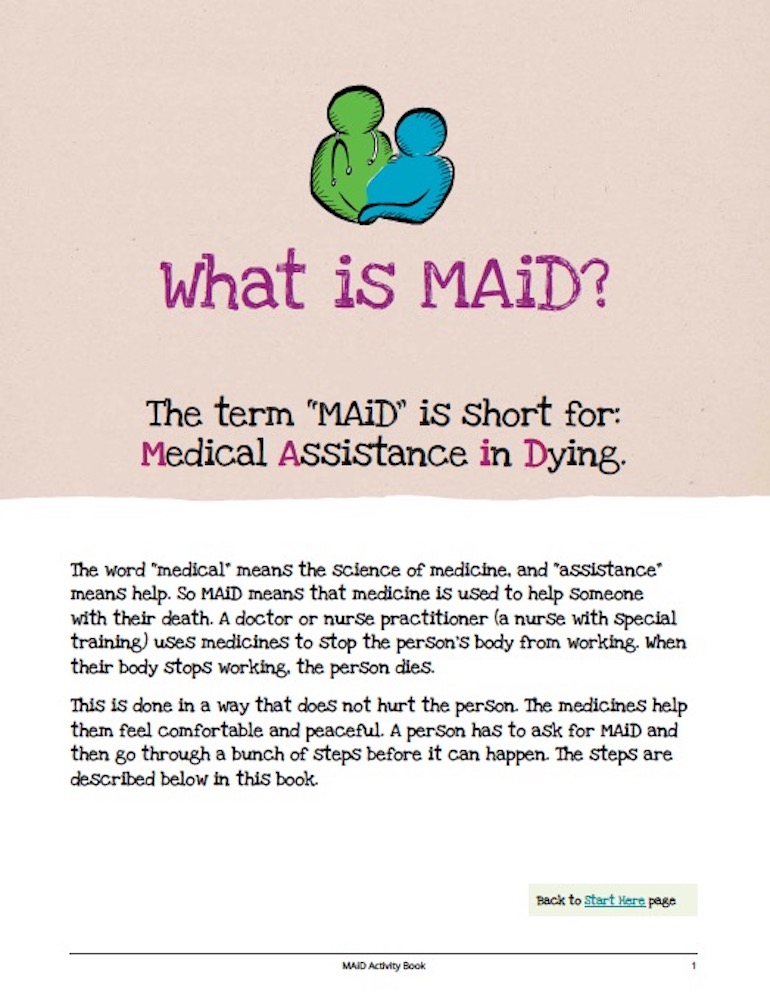 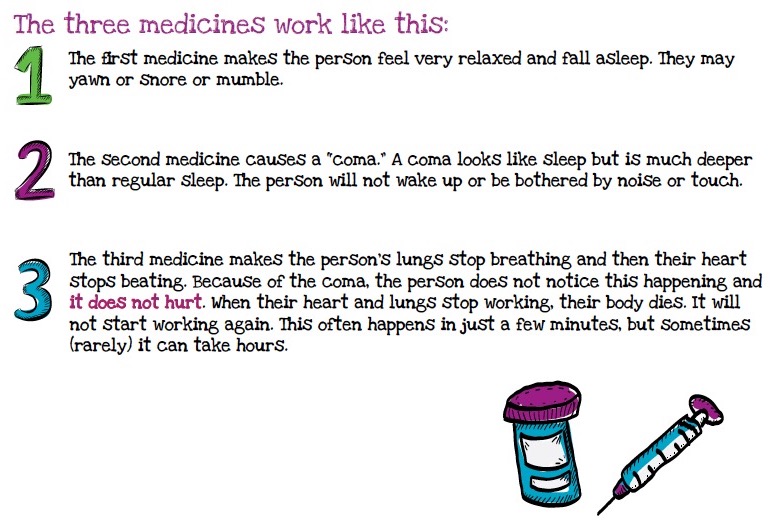 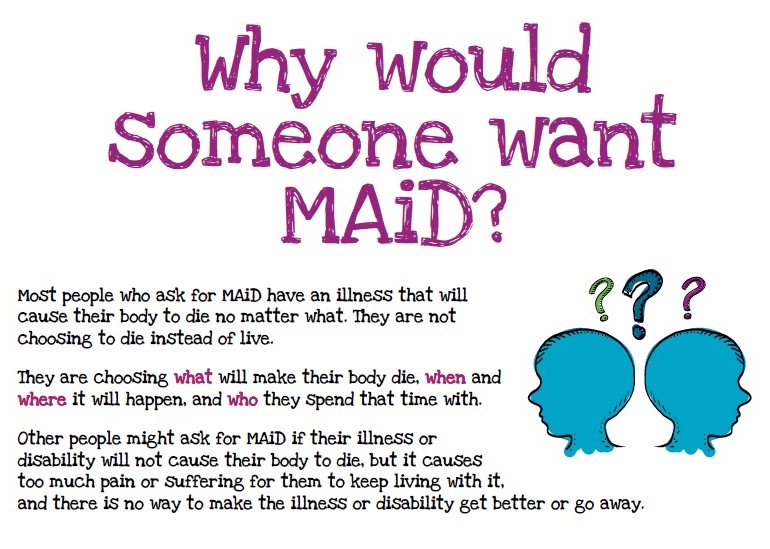 The booklet also contains some activities and ideas on how a child can support the state lethally injecting people. (By the way, Canada abolished the death penalty nationwide in 1998.) 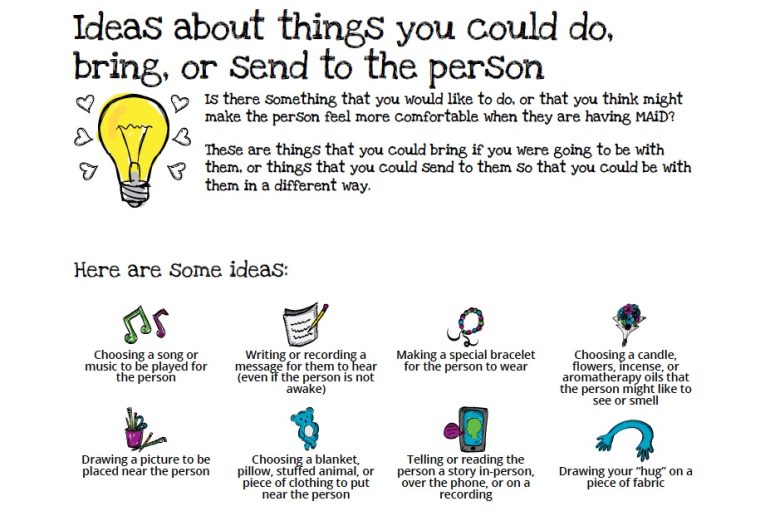 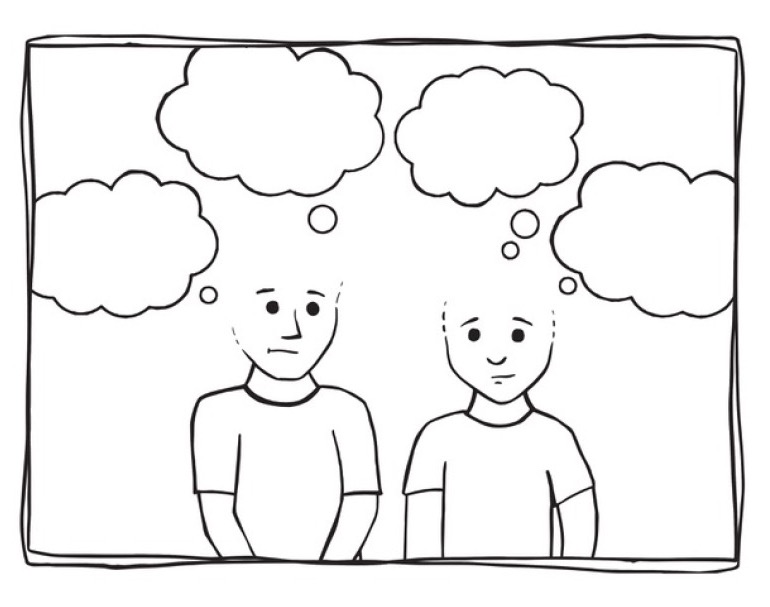 The booklet then explains the MAiD process step-by-step. 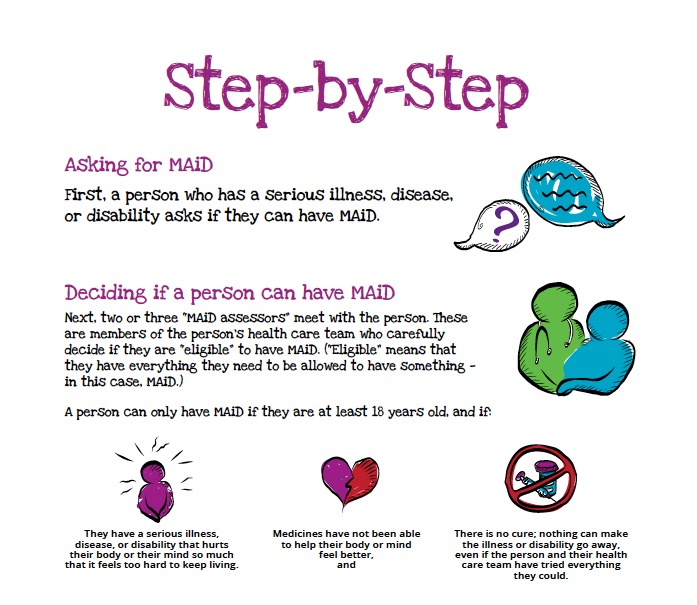 It then explains the schedule of the state-induced death. 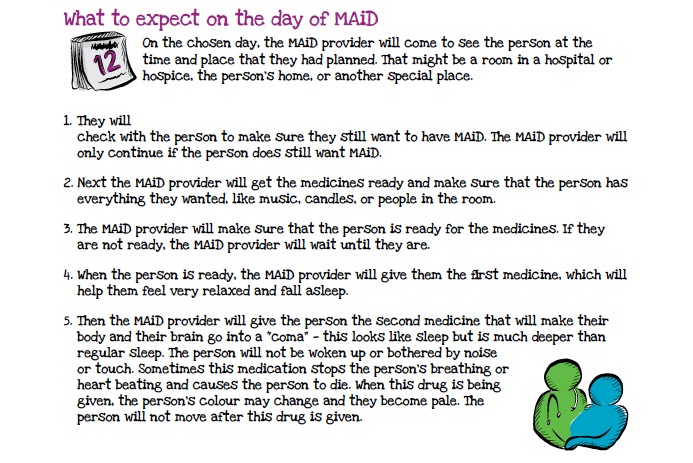 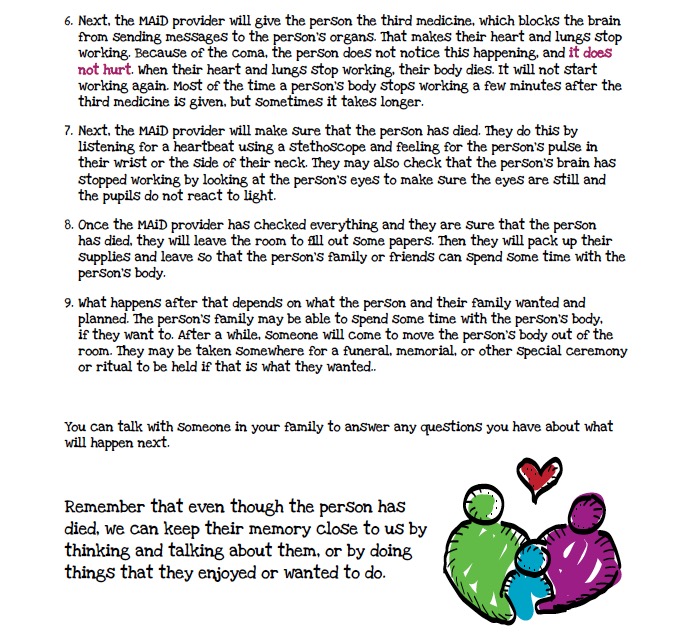 Government agencies Health Canada and Veterans Affairs are both partners with the Canadian Virtual Hospice.

Health Canada supports a website that has produced an activity book normalizing #MAiD to our children.

The book doesn’t address the flawed premise behind assisted death making it difficult for children to trust doctors who are there to provide health care not death care. pic.twitter.com/lw8aRFeTPo

Lethal injection, but as explained to children in a cute font with drawings. pic.twitter.com/UeqQBionEZ

We covered that here:

Here’s a quick’n’dirty summary of what’s going on up north.

The state offing people was glamourized with a slick, corporate sponsorship to make one woman’s final wishes come true so the clothing retailer could post the propaganda film on their website.

During the pandemic, the elderly were choosing MAiD instead of lockdowns.

Despite what the booklet implies, the poor and vulnerable are signing up for MAiD because of healthcare wait times and expensive housing… and it’s being granted.

More and more veterans are coming forward saying that as they were seeking treatment for their health or mental health problems, they were offered MAiD instead.

A former Canadian veteran suffering from post-traumatic stress disorder was offered a medically assisted death when he called in for help. pic.twitter.com/dPlVA6yTYH

One of the more gut-wrenching stories was that of Christine Gauthier, a veteran and Paralympian, who was offered MAiD because she was frustrated at waiting for years for a wheelchair lift in her home.

MAiD is scheduled to expand in March 2023 to the mentally ill and “mature minors” a nebulous term that hasn’t been defined in the legislation.

This brings me to a little hypothetical situation.

Suppose a kid used this little booklet because a family member chose assisted suicide due to terminal cancer. What if that kid is diagnosed with a mental health issue as a teen and decides that the process is all hunky-dory and applies for MAiD as a “mature minor.” Would that person be rejected? Or does the government proceed with lethal injection? This person would arguably be more informed than the general population having seen the way MAiD is carried out — possibly even being present for it — and was given a government-funded resource to help them understand the process. Can a kid who isn’t old enough to get a tattoo or sign a cell phone contract be mature enough to seek medically assisted death? What about someone that has their judgment clouded because of mental illness? Now pair those. These are the concerns that many Canadians are expressing.

After the deluge of negative headlines about the permissiveness of the expansion, the Trudeau Liberals have decided to put forward a motion to temporarily delay the expansion.

The federal government has announced it will be negotiating an “extension” to the March 17 2023 deadline to offer medical assistance in dying (MAID) for people suffering solely from a mental disorder, said Justice Minister David Lametti.
Until now, Lametti had given no indication that he would be open to delaying the deadline despite growing calls to do so from opposition parties and psychiatrists across the country in past weeks because of concerns regarding safeguards. That changed during a last-minute press conference called on Thursday afternoon, the day after most MPs had left Ottawa to go back to their respective ridings for the holiday break.
Source: National Post (December 15, 2022)

But you know that they’re still going to go forward with it.

The Canadian Death Cult in power would have it no other way.