What do Biden’s Democrats do for an encore after arming the Taliban with Billions in our botched Afghanistan exit? Arm another terrorist group, of course.

That’s one helluva track record you’ve got there, Joe.

Or bad enough that you’re leaving so much military hardware behind in Afghanistan that the Taliban now have more helicopters than many of our allies…?

The bill was named in honor of Taylor Force, a native of Lubbock, Texas who graduated from the New Mexico Military Institute (a secondary school) and then West Point in 2009 and served tours of duty in both Afghanistan and Iraq. After completing his service, Taylor entered the Owen Graduate School of Management at Vanderbilt University to study for an MBA. He was murdered in Israel in 2016 by a Palestinian terrorist. At the time of his murder, he was visiting Israel as part of a Vanderbilt University study group examining global entrepreneurship.
He was killed on March 8, 2016, in a terrorist attack by a Palestinian from the West Bank city of Qalqilya, a stabbing attack in Tel Aviv that injured eleven people. Because the killer died while committing an act of terrorism, the killer’s relatives are paid a monthly pension equal to several times the average monthly Palestinian wage. The pension, paid by the Palestinian Authority Martyr’s Fund, is part of a Palestinian Authority policy to pay a monthly cash stipends to the families of Palestinians killed, injured or imprisoned for involvement in attacking, assisting in attacking, or planning to attack Israel, or for other types of politically inspired violence, including riots, violent demonstrations, and throwing rocks. –Wiki

Now we’ve got this whole NEW situation to worry about?

Biden’s had nearly 2 years in office and we are weeks away from a new-look Congress. You’d hope Joe and his bunch would learn their lesson by now, right?

Not exactly. Democrats are still angling to put more money into ‘programs’ than they do into funding the replacement of all of the military gear we just gave away to support Ukraine. So our own military readiness is hardly a priority.

As for all that gear we sent to Ukraine? Some Republicans have called for an audit, but Biden and the Democrats are calling for even more to be sent over. That’s a problem.

Here’s a headline from an official statement recently delivered by Nigeria’s President.

What’s this about a proliferation of weapons?

At the 16th Summit of Heads of State and Government of the Lake Chad Basin Commission (LCBC), the President, who is Chairman of the Summit of Heads of State and Government, said the threat by terrorists in the region had been relatively brought under control, while the influx of weapons poses fresh challenges.
“It must however be stated that despite the successes recorded by the gallant troops of the MNJTF and the various ongoing national operations in the region, terrorist threats still lurk in the region.
“Regrettably, the situation in the Sahel and the raging war in Ukraine serve as major sources of weapons and fighters that bolster the ranks of the terrorists in the Lake Chad Region. A substantial proportion of the arms and ammunition procured to execute the war in Libya continues to find its way to the Lake Chad Region and other parts of the Sahel.
“Weapons being used for the war in Ukraine and Russia are equally beginning to filter to the region. [Emphasis supplied]

So, what kind of ‘terrorists’ are we dealing with, exactly? The Nigerian President’s offical press release gives us that information, too.

“The threat of Boko Haram terrorism in the Lake Chad area no doubt brought to the fore, the imperative of enhanced collaboration among the defense forces of the region in the face of a common aggressor. […]

Oh, my. You remember Boko Haram, don’t you? Here’s a photo that might jog your memory. 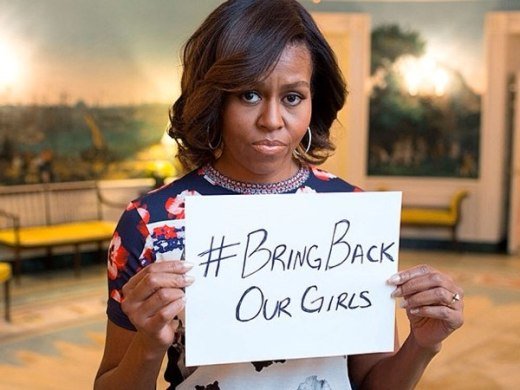 Barack Obama was SO committed to bringing back those girls that he cut Nigeria off from aid they needed in fighting Boko Haram because they did not bend the knee to Obama’s Secular Colonial demand of fealty: they refused to pledge allegiance to the Rainbow Flag.

ClashDaily covered that story, among others, here: BLOOD ON HIS HANDS: Have You Heard About Biden’s Diplomacy Failure… In Nigeria?

How ironic is it then, that Obama’s understudy (and good friend of John Kerry) compounded the problem of having cut off Nigerian aid during the Obama years … by arming their enemies (Islamic Terrorists) now?

Here are a few relevant stories for anyone interested in that history.

Pay attention to the dates of the stories as you read these headlines. You will note that these attacks were before we started shipping massive amounts of firepower to Ukraine… the firepower that Nigeria’s leader just told us was ‘destabilizing’ the situation they face with Islamic terrorism.

Translation: as bad as these headlines are, military hardware supplied by the United States taxpayer has just made them even worse.

These, like the Blood on His Hands story, above, are from the Biden Administration: