Social media posts are Trump’s bread and butter. But there’s one he wrote in response to the TwitterFiles revelations that makes most of them look tame by comparison. What’s he REALLY saying?

Elon Musk started this ball rolling when he made big waves last Friday. As most of our readers already know, he gave respected reporter Matt Taibbi full access to a tranche of Twitter documents and communications proving that Twitter (and likely other big tech outfits) was actively helping Democrats rig elections.

We’ve all seen the polls asking Biden voters if they had heard about Hunter’s laptop and whether knowing about it would have changed their vote. Many had never heard of it and enough of them would have voted differently to take Trump over the top in battleground states and win reelection. This is a known fact.

For years, Trump has been telling anyone who would listen that he was unfairly cheated out of a second term. Since then, he and his supporters have been mocked or even suppressed online over this position. Now Elon has released smoking gun evidence that there really were backroom deals going on to rig the election.

Between that and a bombshell about the FBI having weekly meetings with big tech in the lead-up to 2020, including the FBI running interference for Hunter’s laptop, Trump has every reason to feel both enraged at the audacity and vindicated in his claims that Biden did not win the White House in anything even CLOSE to a ‘fair election’.

That brings us to the social media post at the center of the latest controversy.

In case anyone has trouble reading it on their device, here is the full text, verbatim:

“So, with the revelation of MASSIVE & WIDESPREAD FRAUD & DECEPTION in working closely with Big Tech Companies, the DNC, & the Democrat Party, do you throw the Presidential Election Results of 2020 OUT and declare the RIGHTFUL WINNER, or do you have a NEW ELECTION? A Massive Fraud of this type and magnitude allows for the termination of all rules, regulations, and articles, even those found in the Constitution. Our great “Founders” did not want, and would not condone, False & Fraudulent Elections!”

Needless to say, his post got some immediate response.

Elon responded by elevating the Constitution above any politician:

Some on both sides of the political aisle have denounced Trump for going rogue, saying he is now putting himself above the Constitution.

As one example, Ben Shapiro had a Tweet thread that gave a sympathetic understanding of the justified rage Trump felt over being cheated out of a free and fair election while fish-slapping the comments themselves. Here is the most relevant part of that thread. 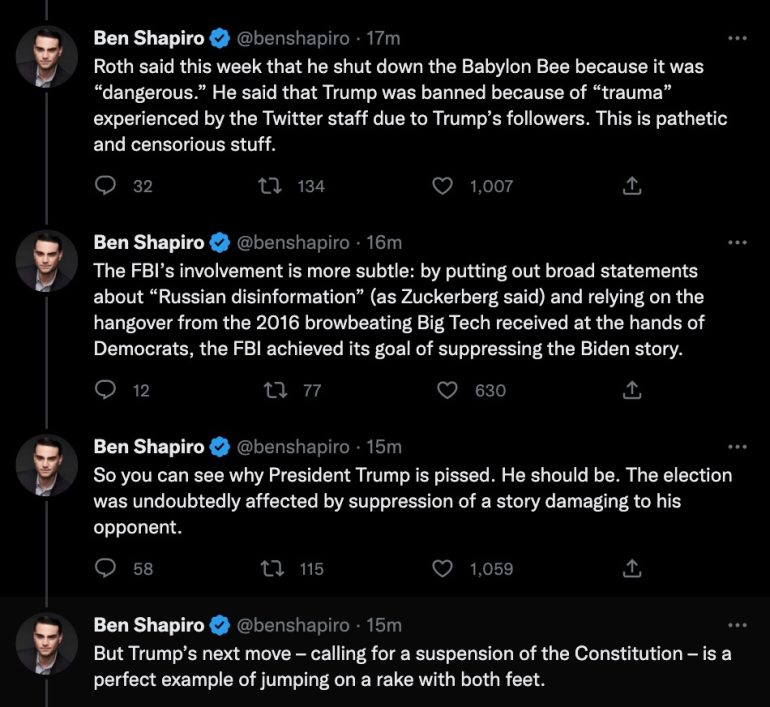 The points Ben makes are well-taken. This is exactly how the left has been weaponizing Trump’s remarks against the right.

But how, exactly, are we to understand Trump’s meaning here?

Any impartial observer could point to example after example of pundits on both sides twisting Trump’s words or at least misunderstanding his meaning. Let’s step back from the emotional and partisan reactions to see whether his past use of social media posts could help shed light on what might really be going on with his recent ‘truth’.

One thing we can say for sure is that some of his most controversial tweets in the past were written to maximize reach and exposure.

His ‘covfefe’ tweet brought attention to the media’s negative bias. His over-the-top tweets about his state of mind brought attention to the fact that he (unlike his successor) was able to dispel questions about mental fitness by acing a standardized cognitive test. He used Twitter to rattle his saber and shine international attention on the problem of little rocket man — before arriving at a solution that brought a halt to North Korea’s bellicose rocket testing. This pattern happened frequently enough that it could only be explained as deliberate.

While it may be true that Trump could benefit from a tighter filter on his media posts, at least some of his ‘outrageous’ posts did accomplish their intended purpose. It’s a tactic that we at ClashDaily have dubbed the Lightning-Rod Effect.

The lightning-rod tactic is simple but effective:

Say something controversial, get people talking about it, and let the Big Idea get smuggled into the conversation as part of the controversy’s content.

Is that what Trump was trying to accomplish here? It’s hard to say for sure. But let’s look at some of the plausible explanations behind the head-scratching statement.

Since the social media post came while the world was still digesting the enormous evidence of both FBI collusion to suppress true information harmful to a candidate whose relationships with foreign governments was potentially disqualifying AND deep cooperation between Democrats and Big Tech to shape public opinion by maximizing exposure to Democrat talking points while deliberately suppressing their Republican counterparts … this creates a situation where the Democratic process has genuinely been hijacked.

Public opinion has been manipulated by cherry-picking what information the public is allowed to interact with. Even before the 2020 election, we had experts like Dr. Epstein warning us that millions of votes could be manipulated with such tactics in ways so sublte that the people being manipulated would not even notice.

As Shapiro said, Trump was rightfully pissed off.

Our next question, then should be was Trump’s response emotional or tactical?

If it was emotional…

If his response was merely an emotional release from two years of pent-up frustration about knowing he was robbed while being derided every time he said so, this could turn out to be a significant setback for future primary hopes.

The biggest reason for that would be a perception that his concerns come across as mainly inward-looking rather than based on what’s good for the country as a whole.

The assumption that Trump is little more than an unsuppressed Freudian ID is a reasonably mainstream view. But jumping to that conclusion too easily discounts the dizzying level of success he has had across multiple difficult disciplines while facing ridiculous odds.

There is another possible explanation to consider.

If it was tactical…

There are several possible reasons to suspect this is a deliberate tactic. Not in the sense of Trump playing some kind of elaborate 3-dimensional chess, but more in the sense of knowing the best ways to bait his enemies.

Some stories are like catnip and can’t be resisted, no matter how hard they try. Trump’s tweets (or ‘truths’ now that he’s on his own platform) sometimes fall into this category.

If they were tactical that would mean there was some objective they were meant to accomplish. What kind of objective might that be?

Here is the text of his ‘truth’ again as a reference:

“So, with the revelation of MASSIVE & WIDESPREAD FRAUD & DECEPTION in working closely with Big Tech Companies, the DNC, & the Democrat Party, do you throw the Presidential Election Results of 2020 OUT and declare the RIGHTFUL WINNER, or do you have a NEW ELECTION? A Massive Fraud of this type and magnitude allows for the termination of all rules, regulations, and articles, even those found in the Constitution. Our great “Founders” did not want, and would not condone, False & Fraudulent Elections!”

What could his objectives be?

There are at least two reasonable possibilities. Feel free to add more in our comments if you think of any.

Expanded exposure of the TwitterFiles story

If this was, in fact, ‘tactical’, his post drew direct connections between the DNC, Big Tech, and election interference. Any citation of his statement will necessarily bring up the context in which it was given.

Left-of-center media have been reluctant to talk about the implications revealed in the TwitterFiles. That means people whose only news sources are left-of-center are probably as much in the dark about Taibibi’s bombshell revelations now as they were about Hunter’s laptop in November 2020.

In calling Trump out for his statement, the left-wing-media cannot avoid amplifying the story that gave rise to Trump’s complaints — including specifically, the corruption demonstrated between Big Tech and the Democrats in 2020.

If this is tactical, he could be taking shots at Biden and the Democrats as illegitimate and — importantly — taking dead aim at their carefully-curated ‘defenders of democracy’ brand.

Trump realizes the Constitution has no provision for an election Mulligan. But he is appealing not to a vague sense of injustice, but to the will of the ‘Founders’ themselves the choice of Founders rather than Framers may have been deliberate since they embodied the Spirit of Independence itself, while the Framers put their best efforts to create a document that fully embodied everything for which the Founders pledged their lives, their fortunes, their sacred honor.

By saying THEY would ‘not condone’ a situation where chicanery and corruption bypassed all the electoral safeguards the Framers put in place, he is planting a seed in the reader’s mind that ‘if only’ the Framers had envisioned a situation as corrupt as this one, they would surely have included a remedy for it in our Constitution.

Baiting a trap for Democrats

A less likely, but still possible, explanation is that Trump is baiting a trap for his enemies.

Democrats will come out and say that Trump’s statement about the Constitution is disqualifying, and that he and his party should be thrown out to the political wilderness because of it.

That would reframe the next election as a referendum on the Constitution. Democrats have been wrapping themselves in the flag for years in their opposition to Trump.

But not so fast.

One of the more damning indictments of the entire left from the TwitterFiles was the fact that only ONE Democrat was the least bit concerned about First Amendment implications of Big Tech censorship.

The other Democrats loved this new-found power of silencing their political rivals.

No wonder Biden was so confident to campaign from his basement. He had an army of unaccredited volunteers doing the heavy lifting with untraceable in-kind donations in Silicon Valley.

Then along came Elon and suddenly their dirty secrets were no longer secret.