Did Biden put party politics and midterm election strategy ahead of the good of the country? That’s what one member of GOP oversight wants to know.

The questions are being raised by Rep. James Comer, R-Ky.

He sent a letter to the Biden administration with some very specific questions about Biden’s energy policy and interaction with foreign governments.

“The New York Times reported that Biden Administration officials believed President Biden’s trip to Saudi Arabia in August 2022 ‘could shore up a Saudi commitment to convince OPEC to increase oil production.’ Instead, on October 5, 2022, Saudi Arabia and the Organization of the Petroleum Exporting Countries and its affiliates (OPEC+) slashed production by two million barrels a day. According to press reports, this decision infuriated the Biden Administration officials who sought the deal to provide temporary fuel price reductions before the November midterm elections,” the letter said. “If the Administration is brokering secret agreements to the detriment of American energy producers and for campaign purposes, the American people deserve to know.” — JustTheNews

“Since day one in office, President Biden has waged war on American-made energy and driven up costs for Americans. President Biden has unilaterally shut down the Keystone XL pipeline, implemented a moratorium on oil and gas production on federal lands, drained critical oil reserves, and pushed policies that directly resulted in skyrocketing energy prices. With one-party Democrat rule in Washington, they’ve weaponized their unchecked power, waged a war against American-made energy production, and forced Green New Deal policies on the American people,” said Ranking Member James Comer. “Oversight Republicans have pushed senior Biden Administration officials for answers and will continue to seek their plans to reverse energy policies detrimental to the American people and our national security. With the power of the gavel, we will hold the Biden Administration responsible for recklessly attacking a critical industry that provides the American people affordable energy and good-paying job opportunities.”

He’s already got some specific questions being sent out to various members of the administration. 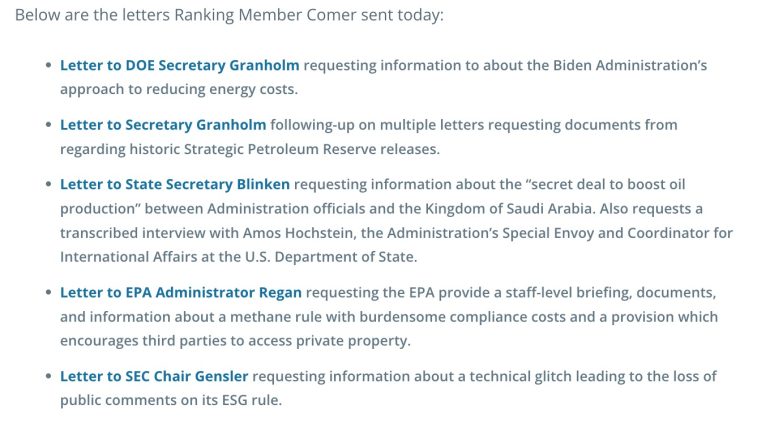 The American people deserve to know what the hell has been going on during the last couple of years under Nancy where the only ‘oversight’ energy was directed at taking cheap shots against Republicans, despite Democrats having both gavels and oversight responsibility.