There is a window of opportunity, after the certification of any election, for any candidate with a grievance to make their case before that door closes forever.

Kari Lake has grievances.
She is currently in that window.
And she is making use of it.

Here’s what she said on an interview with John Solomon’s ‘Just The News’.

Lake’s lawsuit contends that “properly followed chain of custody procedures would require Maricopa County election officials to know the exact number of ballots submitted by the day after” Election Day.
“Twenty-five thousand additional ballots and early voting ballots were discovered two days after Election Day and we don’t know where they came from,” Lake told the “Just the News, No Noise” TV show on Monday. “These are mysterious 25,000 ballots that just showed up. It shows the whole system has serious problems.”
The Maricopa County Recorder announced on Nov. 9 that there were “275,000+ ballots” that “had been sorted for scanning and signature verification” after the vote centers were closed, according to the complaint, but the next day, a Maricopa County election official contacted the county election contractor Runbeck, which reported having scanned 298,000 ballots. — JustTheNews

Rather than go through a stack of dry legal forms detailing every article and infraction, in the 70 page lawsuit she filed on Friday, let’s have a look at Kari Lake’s social media communications with her supporters, keeping them up to speed on what’s going on.

The interview above was not the only interview she did. Kari Lake also sat down for an 8-minute interview on Steve Bannon’s War Room.

.@KariLake: "Signature verification and chain of custody are our only security to make sure that we are having legal votes counted. We believe that there were hundreds of thousands of illegal votes counted and we believe our lawsuit proves it." pic.twitter.com/LUIrfqOvf3

She has whistleblowers in her lawsuit who allege that close to 300,000 votes with no chain of custody are among the votes that were cast. There are upwards of 100,000 votes which she claims fall short of legal voter verification standards, as alleged by whistleblowers involved in the process. Her objections are not emotional in nature, they are specific, measurable and can be objectively proven or disproven. There are election laws that must be followed by statute… and they were not followed.

That was the video. But there’s a lot more where that came from. Here are some other social media posts to round it out. 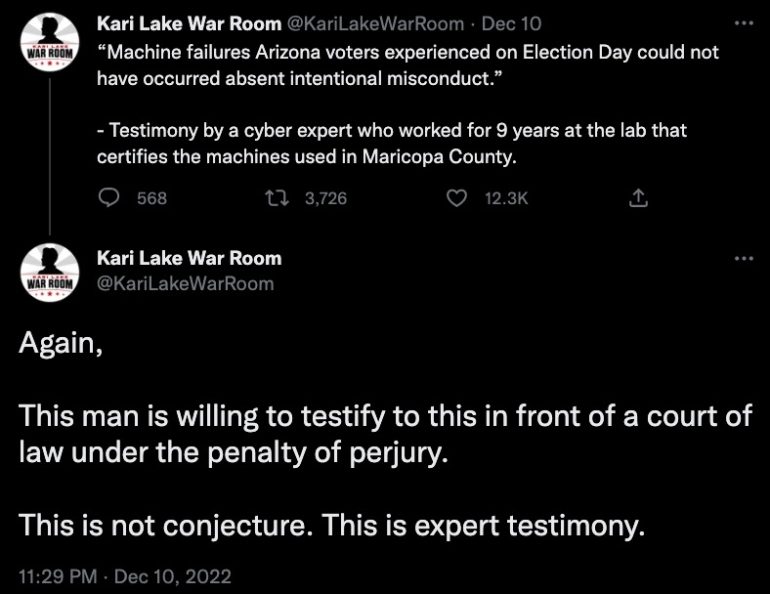 This is part of a highly-technical math-and-statistics based thread detailing the impact of wait times on people casting their votes in affected areas. 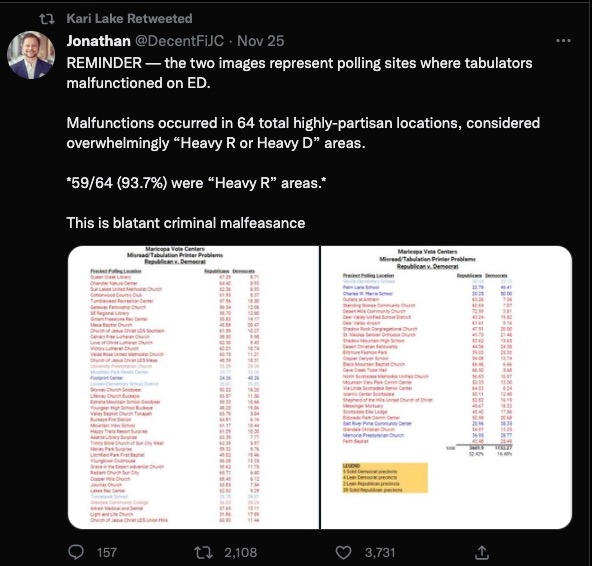 It’s an allegation of actual, deliberate, party-targeted voter suppression, using the technical difficulties associated with a series of voting machines as the active ingredient generating that effect. 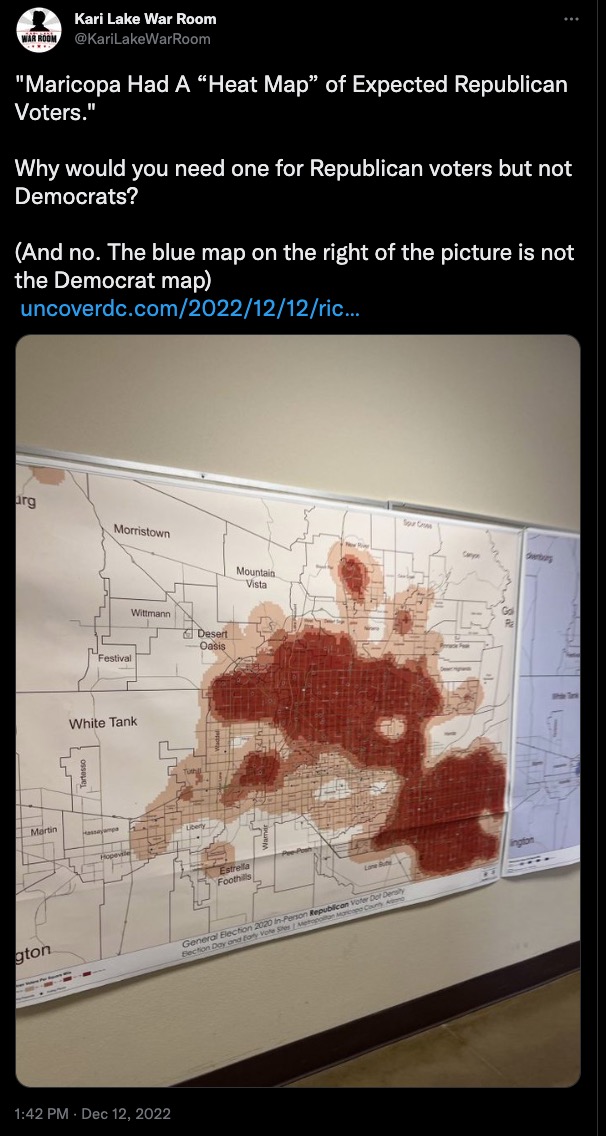 A retweet of this image compared the presence of this map to the discovery of a murder weapon at the scene of a crime.

It’s the sort of discrepancy for which ‘ballot stuffing’ may not be the only explanation, but it is the simplest one. 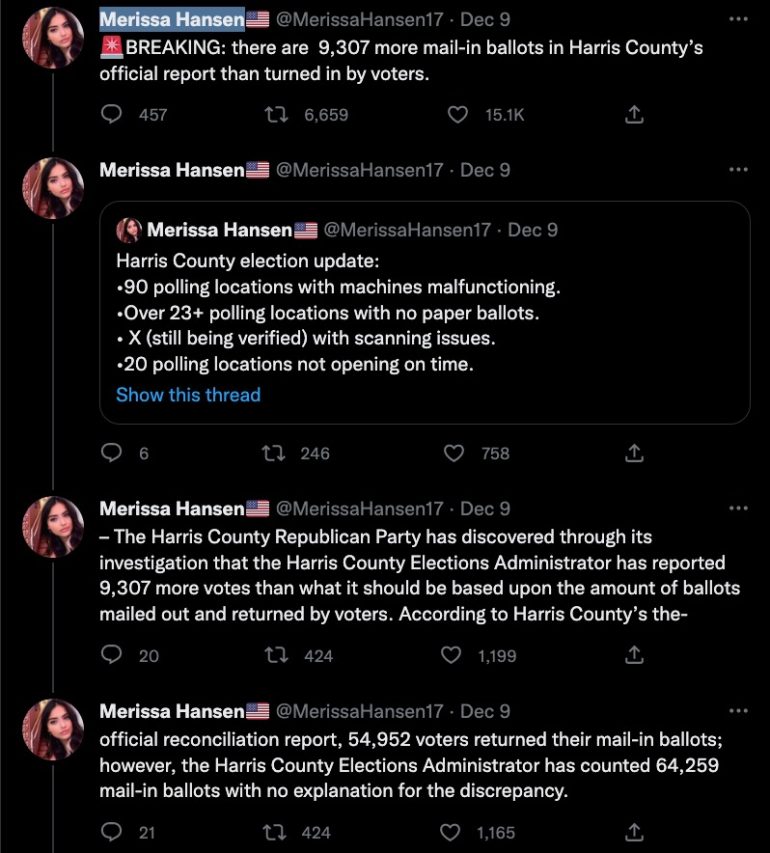 That same thread brings out images of original documents to make her case, and includes other relevant facts and claims including:

– At minimum, at least 3,153 voters were turned away from 26 specific polling locations.
– Most of the polling locations which turned away voters were republican stronghold areas.
– The county appealed both of my election FOIA’s
Precise number of absentee military mail-in ballots
The name of the subcontractor used by Runbeck election services
-give @hollyshansen article a read about the 19 election violations filed in Republican contestant lawsuit
-The @HarrisCountyRP filed its own lawsuit accusing Tatum of violating multiple election laws and procedures, disenfranchising thousands of Harris County voters. They want transparency and accountability so such violations don’t happen again. #HarrisVotes

More than once in her breakdown of these numbers, Hansen makes the explicit claim that the discrepancies she is describing exceed the threshold required to flip an election result.

Whether Lake’s assertions will be enough to convince a judge of malfeasance or the need for some kind of a remedy up to or including an election do-over remains an open question.