It’s not an old story — that laptop is more relevant than ever.

Billionaire Elon Musk tweeted earlier this week that Twitter had “interfered in elections” which garnered a lot of buzz in right-wing circles.

Elon Musk Makes It Official: Twitter HAS Interfered in Elections … Let That Sink In

Of course, there were questions about when the details of this alleged interference occurred since Musk had promised transparency about what appeared to be blatantly biased policy decisions made by Twitter’s Trust and Safety team in the past.

On Friday, Musk tweeted that Twitter was going to release details behind the unprecedented decision by Twitter to quash the New York Post’s article about Hunter Biden’s Laptop From Hell just weeks before the 2020 Presidential Election.

This will be awesome 🍿

Shortly after 5pm Eastern, Musk tweeted that there would be a bit of a delay and the documents would be released closer to 6pm.

We’re double-checking some facts, so probably start live tweeting in about 40 mins

It’s quite a wild ride. Basic protocols that were put in place to protect users from scammers grew into a censorship machine weaponized by Democrats who colluded with their Big Tech allies to silence their enemies.

Democrats, save Rep. Ro Khanna of California, were not all that concerned about Free Speech.

The higher-ups at Twitter Trust & Safety stood by the sketchy decision to suppress the story even though there didn’t seem to be much reason for it, and then-CEO Jack Dorsey seems to have been kept out of the loop.

Here is the entire thread without comment except for Elon Musk’s occasional responses.

3. The “Twitter Files” tell an incredible story from inside one of the world’s largest and most influential social media platforms. It is a Frankensteinian tale of a human-built mechanism grown out the control of its designer.

5. In an early conception, Twitter more than lived up to its mission statement, giving people “the power to create and share ideas and information instantly, without barriers.”

7. Slowly, over time, Twitter staff and executives began to find more and more uses for these tools. Outsiders began petitioning the company to manipulate speech as well: first a little, then more often, then constantly.

9. Celebrities and unknowns alike could be removed or reviewed at the behest of a political party: pic.twitter.com/4uzkHnQ65E

If this isn’t a violation of the Constitution’s First Amendment, what is?

11. This system wasn't balanced. It was based on contacts. Because Twitter was and is overwhelmingly staffed by people of one political orientation, there were more channels, more ways to complain, open to the left (well, Democrats) than the right. https://t.co/sa1uVRNhuH pic.twitter.com/K1xmqQ0TrD

Okay, there was more throat-clearing about the process, but screw it, let's jump forward

17. On October 14, 2020, the New York Post published BIDEN SECRET EMAILS, an expose based on the contents of Hunter Biden’s abandoned laptop: https://t.co/q4zaMw6aVV

19. White House spokeswoman Kaleigh McEnany was locked out of her account for tweeting about the story, prompting a furious letter from Trump campaign staffer Mike Hahn, who seethed: “At least pretend to care for the next 20 days.” pic.twitter.com/CcXTfsdzCT

21. Strom’s note returned the answer that the laptop story had been removed for violation of the company’s “hacked materials” policy: https://t.co/EdTa2xbXn1 pic.twitter.com/KQFRiKYKkb

23. The decision was made at the highest levels of the company, but without the knowledge of CEO Jack Dorsey, with former head of legal, policy and trust Vijaya Gadde playing a key role.

https://t.co/j4EeXEAw6F can see the confusion in the following lengthy exchange, which ends up including Gadde and former Trust and safety chief Yoel Roth. Comms official Trenton Kennedy writes, “I'm struggling to understand the policy basis for marking this as unsafe”: pic.twitter.com/w1wBMlG33U

27. Former VP of Global Comms Brandon Borrman asks, “Can we truthfully claim that this is part of the policy?” pic.twitter.com/Rh5HL8prOZ

29. A fundamental problem with tech companies and content moderation: many people in charge of speech know/care little about speech, and have to be told the basics by outsiders. To wit:

Gadde replies quickly, immediately diving into the weeds of Twitter policy, unaware Khanna is more worried about the Bill of Rights: pic.twitter.com/U4FRLYYPaY

33.Within a day, head of Public Policy Lauren Culbertson receives a ghastly letter/report from Carl Szabo of the research firm NetChoice, which had already polled 12 members of congress – 9 Rs and 3 Democrats, from “the House Judiciary Committee to Rep. Judy Chu’s office.” pic.twitter.com/UpBoq97QkB

35.Szabo reports to Twitter that some Hill figures are characterizing the laptop story as “tech’s Access Hollywood moment”: pic.twitter.com/JTvXoQh6ZK

The problem with the "hacked materials" ruling, several sources said, was that this normally required an official/law enforcement finding of a hack. But such a finding never appears throughout what one executive describes as a "whirlwind" 24-hour, company-wide mess. pic.twitter.com/aONKCROEOd

Good night, everyone. Thanks to all those who picked up the phone in the last few days.

This story is so huge.

A good chunk of Biden voters said that if they had known about the laptop story, they wouldn’t have cast their ballot for Biden.

FLASHBACK: polls show that if the Hunter Biden laptop from Hell wasn’t censored, Biden wouldn’t be president. Twitter helped to steal the election for the libs.https://t.co/ZyvRsnOXMG

YouTuber Jeremy Hambling, who uses the handle “The Quartering” who had livestreamed the release of the thread asked Elon about the Q&A and he responded.

The response was immediate… which was the original point of Twitter.

The DNC and Biden campaign hand-picked the content they didn’t want the public to see on social media, and then sent it to Twitter staff to get it “handled.”

A small, powerful group of people took it upon themselves to ‘handle’ the 2020 election

We can never go back

The most interesting thing in the #twitterfiles is how the Big Tech lobbyist hacks at NetChoice and the wanna-be Silicon Valley employees on the Hill were warning Twitter about how it’s imperiling 230 protections by making their censorship obvious. And Twitter didn’t give a damn.

Just read this and, as expected, Twitter’s far-left apparatchiks simply concocted the whole “maybe Hunter’s laptop came via a hack” excuse. Their M.O. was clearly: censor first, backfill an excuse later, pray Biden gets elected and then, hopefully, get away with the whole scheme. https://t.co/Z56KNfkYt2

The Twitter Files release is historic. This will strengthen our democracy.

Transparency is the key to trust

But, as expected, the partisan “journos” aren’t having a good night.

Some were clearly just jealous.

This thread could have been a substack

Wajahat Ali, who was the third wheel in that Don Lemon and Rick Wilson mockery of Trump supporters is having a totally normal one.

Ben Collins, who takes the role of “disinformation expert” a little too literally is rage-tweeting about Matt Taibbi.

If you think the facts being presented aren’t accurate, go get sources and try to correct the record. But being upset about the public having access to those facts bc it upsets your narrative you is indicative of someone that doesn’t understand the proper role of journalists.

amazing having to explain to a "journalist" that people capable of silencing literally the fucking president wield real power, and power must be held to account

And the political hacks who are now LARPing as journalists are trying to find a way to discredit Musk.

Also: Musk has now seemingly leaked private third-party communications he inherited when he took control of Twitter, in order to settle a political score. I believe it’s the first instance of him doing the nightmare-scenario thing his critics warned he might. https://t.co/C1HUwcKhxG

There’s much more to come.

Tune in for Episode 2 of The Twitter Files tomorrow!

Things are just getting interesting.

It’s a good thing that Twitter 1.0 is going the way of the dodo and being replaced by Musk’s Twitter 2.0.

Someone whose Twitter account was recently restored must be feeling a bit vindicated now that Big Tech’s thumb on the scales has been revealed. 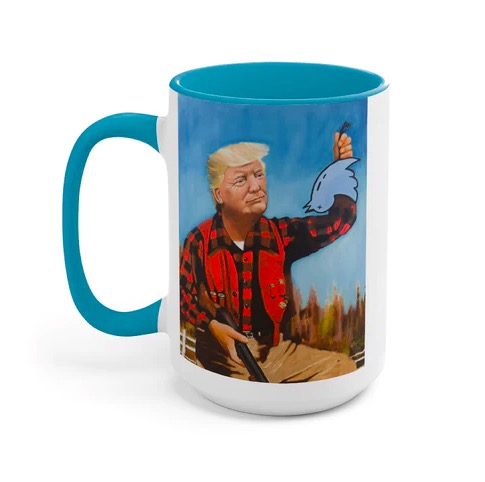 Check out more Righteous & Rowdy gear in our ClashDaily store.