It was a classic example of an unstoppable force versus an immovable object. Elon Musk has a strong preference for free speech, and Kanye was determined to stress-test that position to the absolute limits.

Kanye’s *ahem* ‘Downfall’ really was one of those ‘that escalated quickly’ situations.

That limit was taken to the wall when Kanye teamed up with internet provocateur (and reputed presidential campaign manager) Milo Yiannopoulos and unapologetic antisemite Nick Fuentes.

We all know about the Mar-A-Lago meeting Kanye had booked with the President long before Kanye started raging against whichever powerful Jewish forces he thinks have been exerting world domination.

Kanye brought them both along to the meeting that has since been called a ‘trap’ laid for Donald Trump … which dovetails nicely with reports that Milo has pledged to wreak vengeance on Republicans and ‘burn the party to the ground’.

Naturally, everyone saw Kanye with Fuentes and wasted no time assigning all the left’s favorite slurs against Ye. Bigot. Antisemite. Etcetera, etcetera, you know the drill — you’ve been slapped with the same slurs when Joe stood in front of Independence Hall.

Podcaster Tim Pool gave Kanye a long-form interview opportunity to clear his name, but instead, he doubled down and made some shockingly odious statements about Jewish people… storming out of the interview as soon as Tim gave even a little pushback on the topic.

Next thing you know, Kanye — Ye as he now calls himself — is on the Alex Jones show and has said some positive things about Hitler and Nazis that started trending on Twitter.

Obviously, Elon was trying to stand by his statement of allowing a great deal of latitude for people to be stupid in public where the natural consequence is having the general population itself call people out for being … stupid in public.

If they don’t learn to abide by social norms, they will eventually get shunned by so many people it would no longer matter. This is exactly the same mechanism we have as social limiters for real-life conversations with blowhards and creepy people.

Eventually, Kanye was able to find a line that can’t be crossed. 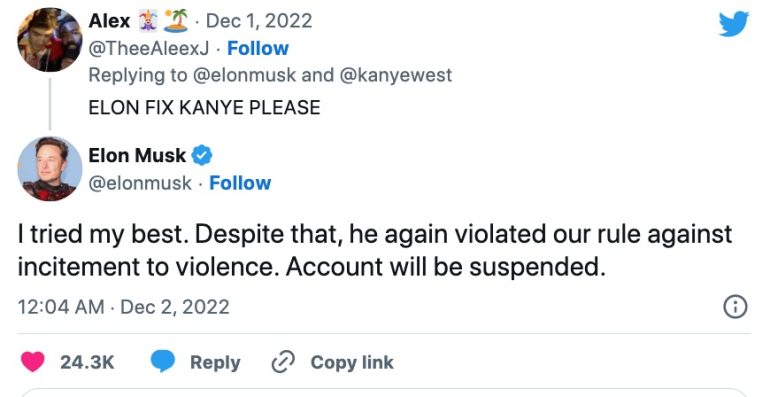 Elon clarified that it was not the unflattering photo Kanye published of Elon hanging out on a boat without a shirt… with Ari Emanuel. That unflattering photo actually served as motivation for Elon to get his weight back in check.

No, the line Kanye crossed came with the caption: “YE24 LOVE EVERYONE “#LOVESPEECH”

The image he published took the national symbol of the Jewish people — the Star of David — and morphed it with the symbol of Hitler’s regime from the Third Reich.

We won’t republish the full image here, because uploading it to our page would only make such a worthless image proliferate though the internet more. But this portion of it gives more than enough context for our readers to get the sense of the horror. 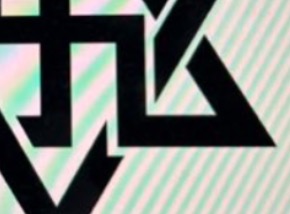 If you’re trying to make sense of the image, the point in the upper left where the lines cross is the center of Kanye’s image, and the diagonal lines form parts of a triangle in a Star of David formation.

The swastika at the center of the image — although largely cut off in our photo — should be easily inferred.

THAT is the incitement that ultimately cost Kanye his Twitter following. The unanswered question is — what the hell was Kanye thinking? Is he completely out of his gourd Or is this a stunt in service of an agenda?

If it does, somehow, turn out to be the latter, there are two data points that may be important to get to the root of the explanation.

The first data point: Milo has a long-standing reputation for using shock and outrage as a tool for self-promotion, and an open disdain for normative boundaries.

If he really is Kanye’s campaign manager, this may an attempt to leverage the ‘no such thing as bad publicity’ principle of promotion. Whether it’s even remotely possible for that axiom to apply in this situation remains to be seen.

Second data point: Kanye recently failed in an attempt to purchase Parler, a social media platform with a position on free speech that places no limits on any communication that would otherwise be allowed by law. Someone’s opinion about that speech (however heinous) is not relevant to that policy.

It is not beyond the realm of possibility that — for whatever motivation — his entire stunt could be intended as an elaborate ploy to discredit Elon’s commitment to having Twitter exist as a free speech platform.