Grab your popcorn, because there’s even more to the drama than we expected.

As if Arizona’s 2022 election mess wasn’t already a cluster***k for the ages with all the shenanigans and chicanery that’s been uncovered already, we’ve got ourselves a new wrinkle.

You may have heard one part of it already. But the deep dive that story sparked takes us SO much further…

Arizona Governor-Elect Katie Hobbs is facing backlash as proof that her office requested for certain tweets to be censored came out of Elon Musk’s release of the “Twitter Files,” the internal documents showing collusion between government officials, campaign teams, and other like actors with the social media giant to silence political dissent.

In 2021, when Twitter was working under the old rules, Katie Hobbs was making use of Twitter to pull down posts for ‘election misinformation’. Obviously, if she considered these unidentified tweets ‘misinformation’ it means they were of a contrary political opinion to her own.

It also means she was actively working those back-channel censorship contacts to Twitter that the TwitterFiles story exposed over the weekend.

On January 7 2021, the communications director for Hobbs’ Secretary of State office emailed the Center for Internet Security (CIS), a 501 nonprofit cybersecurity organization that “makes the connected world a safer place for people, businesses, and governments through our core competencies of collaboration and innovation,” according to their website.
“I’m flagging this Twitter account for your review,” Hobbs’ comms director wrote to misinformation@cisecurity.org, linking to an unidentified profile. The subject line was “Election Related Misinformation.”
The “misinformation” department at CIS then forwarded the message along to an employee at Twitter, writing “Please see this report below from the Arizona SOS office. Please let me know if you have any questions.”
“Thank you,” Twitter wrote back. “We will escalate.” –PostMillennial

We see a direct link between cause and effect: a link she was clearly not shy about using.

Unreal! Katie Hobbs’s office contacts Twitter to have posts removed! So, the democrat candidate, who ran the AZ election, censored her political opponents, disrupted Election Day votes, and then threatened counties with prosecution if they didn’t declare her the winner. pic.twitter.com/TWIgHHPqkd

That would have been a significant story in its own right.

Then a Twitter persona with the name ‘bad kitty’ did some digging, and suddenly the story got a whole lot worse.

The MS-ISAC is a voluntary and collaborative effort based on a strong partnership with the U.S. Department of Homeland Security (DHS).@charliekirk11 https://t.co/ixOTZBIBkf pic.twitter.com/DWeRfxDRHA

Right from the beginning it gets spicy… implicating the DHS in an effort that looks an awful lot like the same kind of partisan speech suppression that has sparked outrage — and threats of lawsuits — by those on the receiving end of this partisan censorship and those who simply care about the rule law treating all citizens equally.

But Bad Kitty was just getting started and showed us all kinds of shady political cross connections in the political censorship game.

If you want to follow any of the threads to where they lead, you can follow the ‘did some digging’ link to get to the tweet where it all begins. 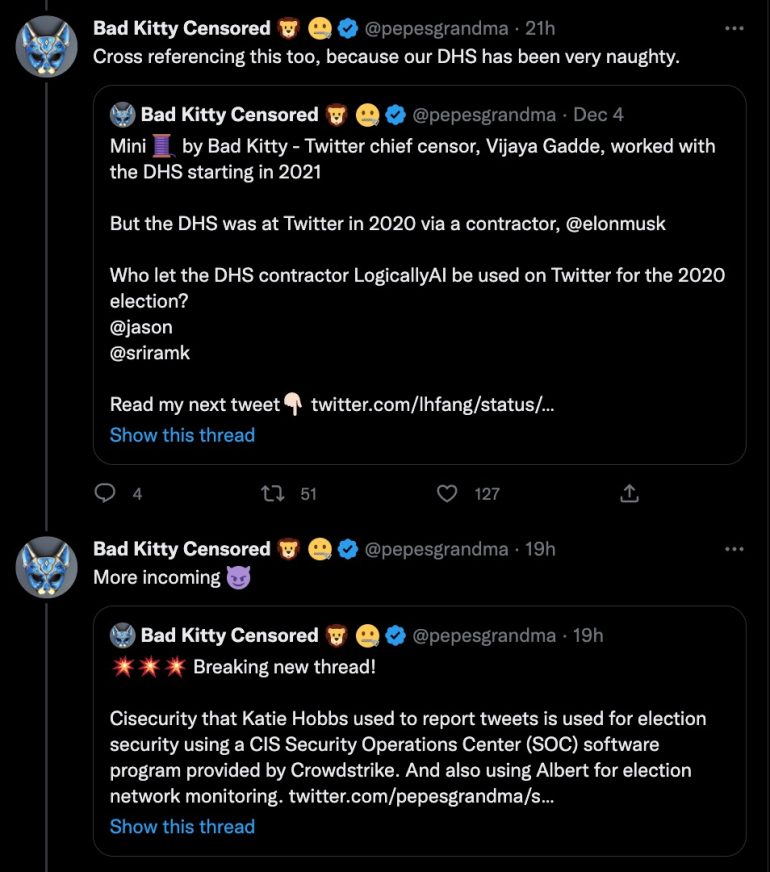 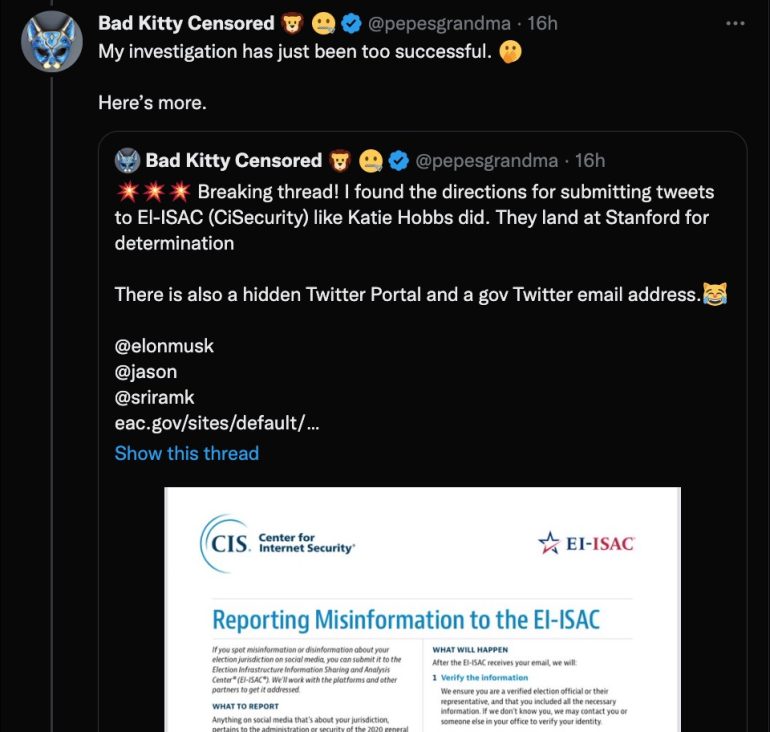 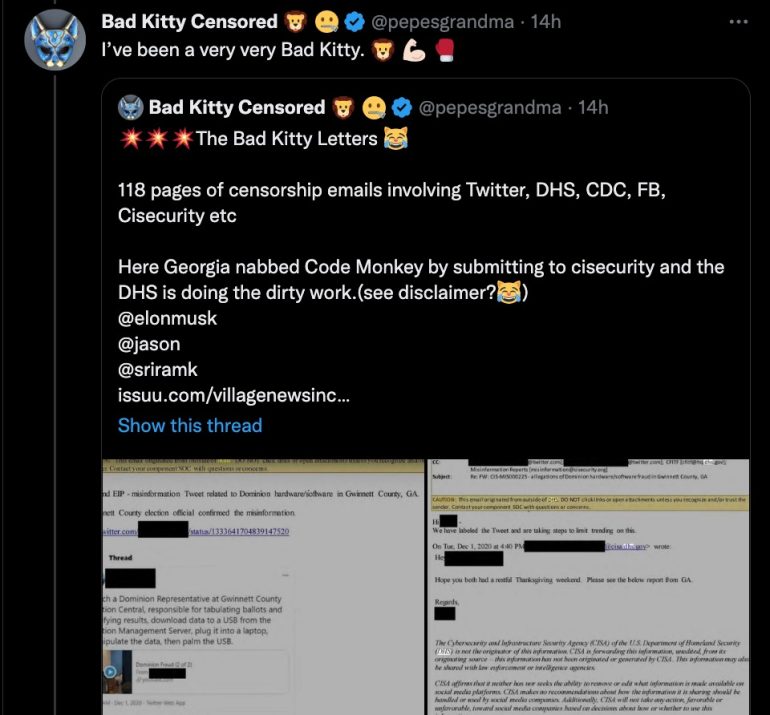 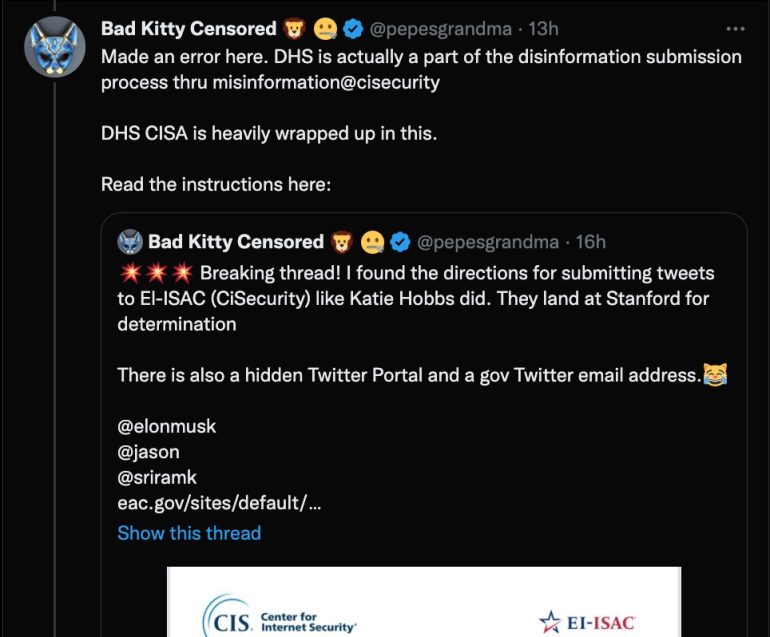 And that’s just the tip of the iceberg? 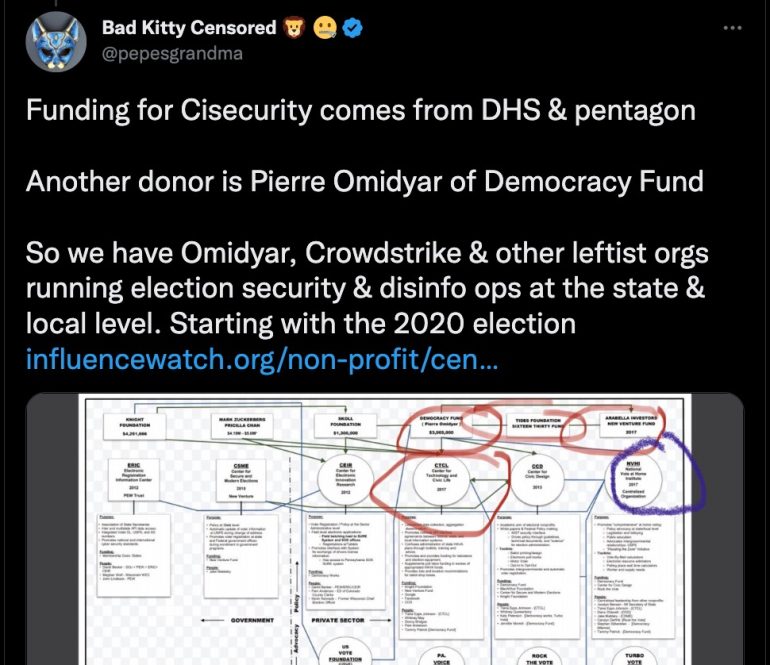 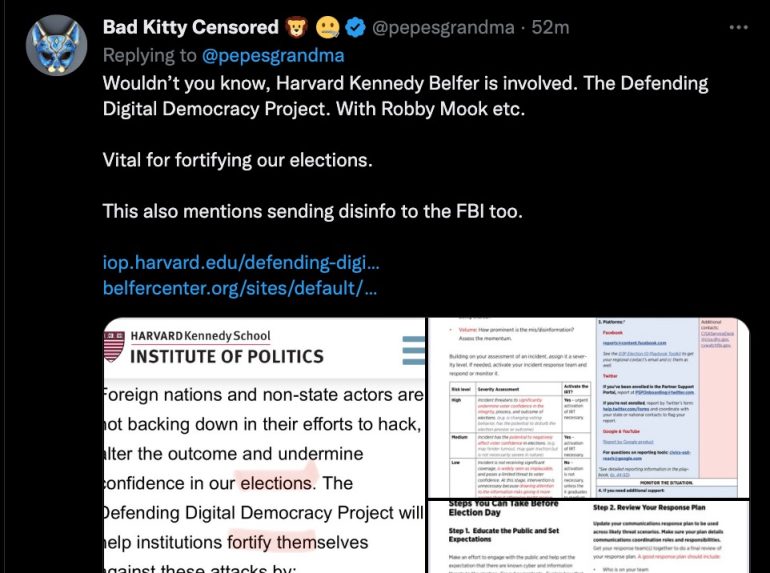 Bad Kitty has been busy.

He (she?) deserves a nice spot in a sunny room and a tasty snack for all that hunting.

This may prove important in future investigations and perhaps even lawsuits.

I wouldn’t be surprised if Kari Lake’s lawyers are already rifling through it to see if anything in her is relevant to her dealings in Arizona. She might even shoot him a message asking for a closer look in the spiking of any accounts that may have impacted Arizona’s vote… especially since Hobbs was both the election officer AND the candidate.