It doesn’t take a financial genius to figure out what advice you’d give a friend or college-age child if they continually maxed out their credit cards. This is no different.

Remember how Biden bragged about his policy being so good for the economy? How he’s reducing the deficit despite passing budgets running almost two trillion dollars?

If you think the only solution your maxed out credit card needs is raising the borrowing limit, you are on a path to financial disaster.

Our debt limit is exactly the same problem, bumped up to the national scale. McCarthy is one of the first politicians we’ve had in a long time who is finally acting like someone who cares about the impact of being $31 Trillion in debt.

He was featured on Sunday Morning Futures yesterday. After answering some of the obvious questions about the weaponized DOJ, the Biden docs, and the committee on China, she turned her questions to the economy.

This became relevant because Janet Yellen announced that something needs to be done in the next few days to avert disaster.

In reality, we have until June before the real consequences of the debt limit begin to bite us, which means there is time for rational people to have rational conversations about the debt limit… something that has been lacking in recent years, especially with the excuse of ‘urgent’ issues that require us to shovel money out the door without debate or any real attention paid to how that money is being used. (Pandemic spending and Ukraine military aid are just two examples that come to mind.)

If you cue up to the 12:20 time stamp in the video, you will see him answering big questions about urgent spending needs in a calm and detached way that we would need our leaders to discuss questions of national importance.

Why is McCarthy’s attitude to our debt important?

Here’s why: 8 cents of every dollar the government currently takes in is paid as interest on debt owed, and that’s a number that can get a lot bigger if interest rates go higher.

To continue the credit card analogy, that number is like making the minimum payments on your card.

Nobody who cared about his financial future would be cavalier about racking up more debt without any thought to how it would get paid down again.

For comparison’s sake, here’s where the expense of treading water on our interest obligations currently falls among our national spending priorities. 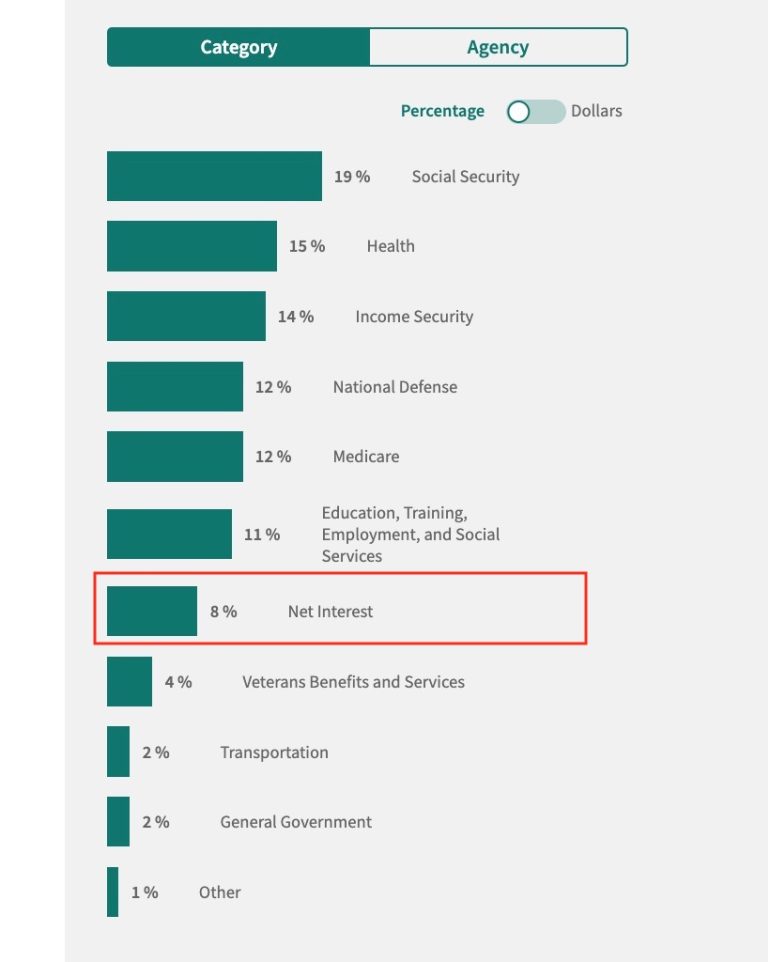 Debt maintenance accounts for an amount equal to two-thirds of national defense spending. More than half of all health spending. It’s already approaching half of what we pay for our biggest line item — Social Security.

And — we cannot stress this enough — this figure goes higher as interest rates go higher.

As it stands now, the amount we’re piddling away for treading water on interest maintenance is TWICE what we currently spend on Veteran’s benefits.

So, is it LONG past time for a conversation that does more than just agree to bump that debt limit number higher?

That would depend on whether we care about becoming the next Weimar Republic, Zimbabwe, or Venezuela.

Some people would be more than happy to see America go bankrupt.

Hopefully, we have elected enough people who are not among them to pump the brakes on what’s coming… but it won’t be easy. Maria Bartiromo herself pointed out that Biden’s White House has no interest in negotiating on the spending side — not one little bit.

And why would they? The more money a government is throwing around, the more it can use that money to exercise control over the people receiving it.