If security at Mall of The Americas was not already familiar with the Streisand Effect, they are about to discover it now.

Paul Shoro, a Christian originally from Ethiopia, went to the Mall of the Americas wearing a brightly-colored shirt with a simple, uplifting message written across the front in block text. 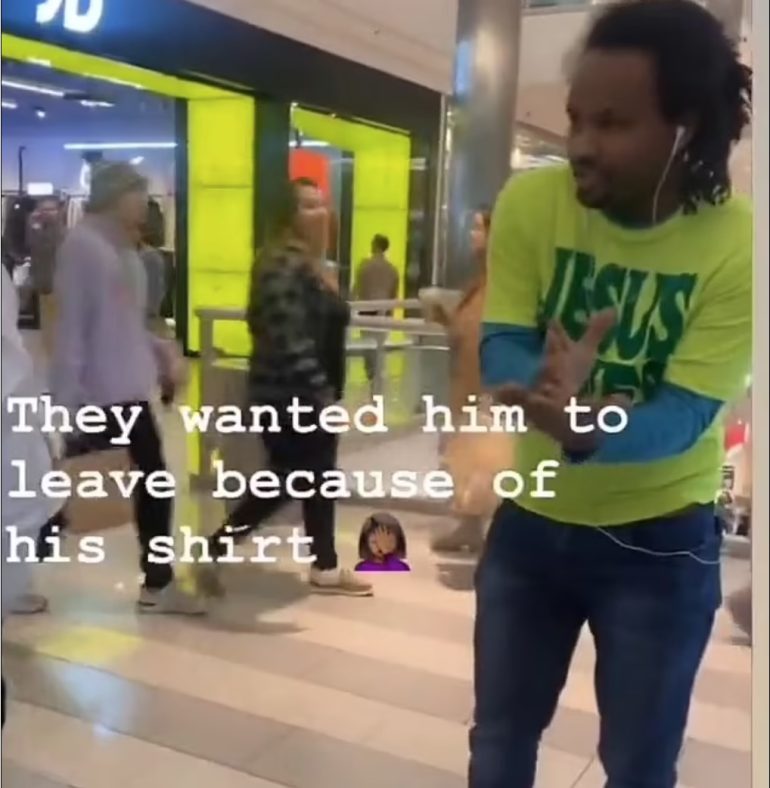 The back of his shirt was admittedly a little more controversial. It goes right for the jugular of the secular pseudo-religious worldview. Here’s a photo: 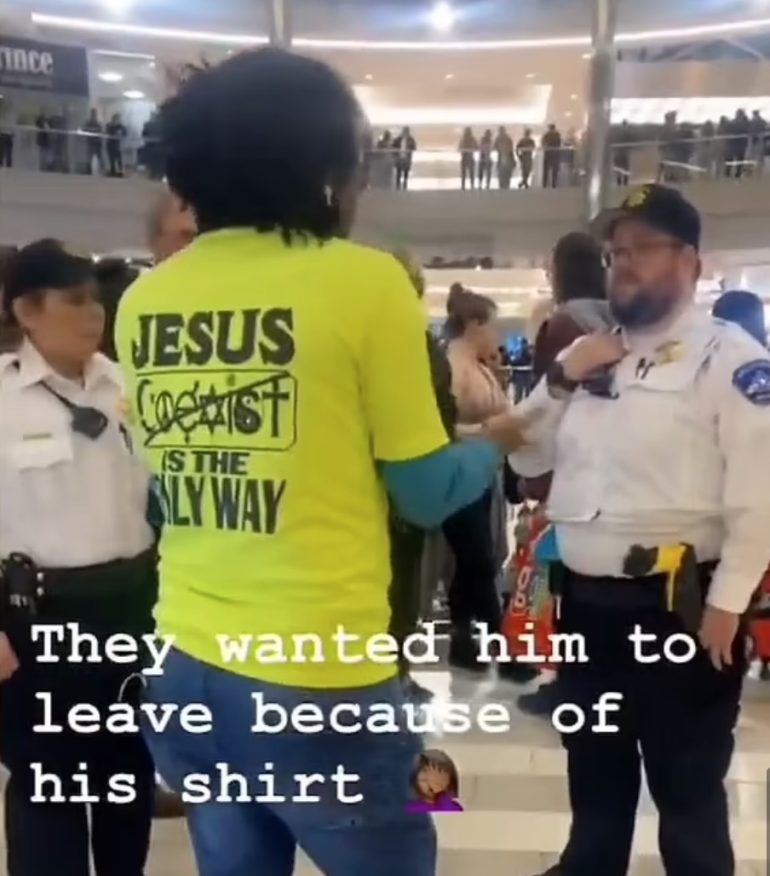 In the video, a security guard at the nation’s largest shopping mall could be heard telling the Shoro: ‘If you want to shop here you need to take off that shirt’.
‘When I was asked to take it off I said I would rather go to jail or die than take off my shirt,’ Shoro stated
Another clip shows the same guard saying: ‘Jesus is associated with religion and it is offending people. People have been offended.’
During a YouTube interview since, Shoro said: ‘He told me what to do. Go into the street and preach the Gospel. I ordered t-shirts. Everything I have is Jesus, man. Hallelujah!
‘The Lord delivered me from the darkness. He anointed me and finally by the time I was in Washington D.C. he said ‘Hey son, I need you to go to Minnesota.”
‘I started going to Mall of America and met tens of thousands of people but they stopped me preaching the gospel.’ -DailyMail

News flash: both in the days of his earthly ministry and in the era of His church, Jesus has always stirred up passions in people, some passionately for, others passionately against. When Jesus said ‘I come to bring a sword’ (Matthew 10:32-40), this was exactly what he was talking about.

The fact that Western churches have embraced a tepid ‘meh’ response in culture says more about today’s Western Christians than it ever would about Jesus himself.

‘Some people think we judge them but we don’t. We go out to preach and help these people. I was so nice to them. I know my purpose. I didn’t go there to fight.’
Shoro said other shoppers were supportive of him, telling the security guard he had freedom of speech and was allowed to wear the shirt under the law.
The video which was recorded on January 7 has prompted outrage online with one group organizing a protest at the Mall where they intend to wear their own ‘Jesus Saves’ shirts.
A spokesman for Mall of America told DailyMail.com Shoro was ultimately allowed to remain in the mall still wearing his shirt following the incident. –DailyMail

The very thing they tried to stamp out will ultimately be magnified. Others will wear the same shirt in solidarity.

It has almost a Book of Acts ring to it, don’t you think?

The article went on to describe the incident in a little more detail.

One week prior, he had also been issued with a 24-hour trespass for ‘soliciting guests’.
During the tense exchange, three security guards surround the man.
He can be heard saying: ‘I didn’t say anything though. I didn’t speak. I didn’t say anything. I just went to Macy’s.’
The guard replies: ‘Again, I’m giving you a couple options. You can take the shirt off and you can go to Macy’s and you can do your shopping.
‘Or you can leave the mall, OK? Those are your only options right now,.’
The officer later claimed he was engaging in ‘religious soliciting,’ which the mall forbids.
Shoro kept insisting throughout the video that he was not attempting to preach but was simply wearing the shirt while shopping.
Mall policies prohibit ‘inappropriate attire,’ including apparel that ‘has obscene language, obscene gestures or racial/religious/ethnic slurs that are likely to create a disturbance.’ — DailyMail

Will tyrants never learn? Suppressive tactics might work some of the time, but all it takes is one guy making a bold stand, and suddenly … that one spark of genuine courage has a nasty little habit of becoming contagious.

Then, before you know it, sleepy Christians begin to remember who they are and what, exactly, it is they are called to be here in this world.