Congresswoman Cori Bush said something racist… What a shocker. (Not really.)

Apparently, the Missouri Congresswoman who is a member of the far-left progressive “Squad” has her panties in a bunch because the nearly two-dozen dissident GOP Reps are rallying behind Florida Congressman Byron Donalds for Speaker of the House instead of Kevin McCarthy.

Rep. Bush is clearly upset because Republicans are not allowed to have the first black man as Speaker of the House of Representatives affiliated with their party. In her small, small mind, those “historic” moments are reserved exclusively for the Democratic Party.

Progressive Rep. Cori Bush of Missouri on Wednesday lashed out at people who are lauding GOP Rep. Byron Donalds of Florida’s nomination for House Speaker as ‘historic.’
Donalds was nominated as conservatives’ alternative to embattled House GOP Leader Kevin McCarthy, whose quest for the gavel has been derailed by 20 lawmakers in his caucus including Donalds.
When announcing the nomination in the first round, Texas GOP Rep. Chip Roy noted the historic nature of having two black candidates for House Speaker. It came after Democrat Rep. Pete Aguilar nominated incoming Democratic Majority Leader Hakeem Jeffries for the gavel.
It earned a standing ovation from both sides of the House chamber – but Bush was not moved.
‘He is a prop,’ Bush, who is also black, wrote on Twitter on Wednesday afternoon.
‘Despite being Black, he supports a policy agenda intent on upholding and perpetuating white supremacy. His name being in the mix is not progress—it’s pathetic.’
Source: Daily Mail

It’s unclear why she’s so upset, because, if you read her tweet, Rep. Byron Donalds isn’t really black anyway.

FWIW, @ByronDonalds is not a historic candidate for Speaker. He is a prop. Despite being Black, he supports a policy agenda intent on upholding and perpetuating white supremacy.

His name being in the mix is not progress—it’s pathetic. 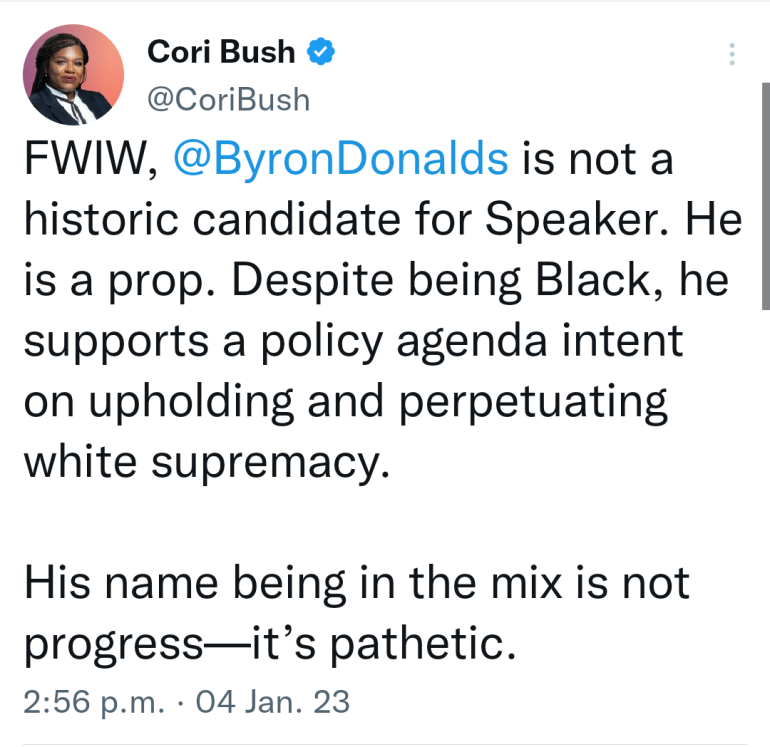 Speaking of what is pathetic, that tweet is grotesquely racist and pushes the same tired, old tropes that blacks are somehow beholden to the Democratic Party which has consistently failed them in every single area including propping up slavery and Jim Crow to rising crime in minority communities to failing educational outcomes and the systematic destruction of the black family.

Cori Bush is attacking a guy that was born in Crown Heights, Brooklyn, and made a success of himself as a businessman despite a couple of run-ins with the law when he was younger. He is now a proud Republican Congressman and a patriot who was a member of the Tea Party back in the early days of the movement.

It’s a disgusting attack from a woman who parlayed activism for grifting organization Black Lives Matter into a political career… and the clock is clearly ticking on the relevancy of that association.

This is the same woman who shouts “Black Lives Matter” constantly… but thinks that all black people should think the same way that she does or they’re “a prop… perpetuating white supremacy.”

Cori Bush has found a black life that doesn't matter.

FWIW, didn't Democrats like you fight to keep Byron Donalds out of the Congressional Black Caucus? How many Republicans are in it?

Yours truly called her out for her very predictable take.

I see she went with the "prop upholding white supremacy" line. Did she run out of room for "Race Traitor"/"Voting Against His Interests"/"You Ain't Black" and a reference to the novel by abolitionist Harriet Beecher Stowe?
It's so disgusting… and predictable. https://t.co/5Iklw96XLo

But I wasn’t the only one… many, many other people were calling her out for the disgraceful and disgusting tweet:

Open racism is normalized on the radical Left.

Now the Dems are calling @ByronDonalds a “white supremacist.”

.@CoriBush, if you can’t disagree with your colleague, @ByronDonalds, without accusing him of racism, you might be part of the problem. https://t.co/vbvEwKLnPV

You and other Blacks have been historic props for white liberals for years. And look what it got you! Don’t look at @ByronDonalds and hate yourself. That’s the self hate white liberals teach Blacks.

Tell me @KamalaHarris is not a prop for white liberals! https://t.co/pxLh8A1qxb

Cori, are there any black Republicans you don’t think of as white supremacists? https://t.co/lZwv3xoEyM

Less than one third of Black Democrats identify as "liberal." Two thirds identify as moderate or conservative. It is an absolute scandal that so many feel they have no choice but to vote for politicians who talk about them this way. https://t.co/4jTIcX99os

Holy crap, is this the most ethnically demeaning tweet imaginable. Why don’t you just call him an “Uncle Tom” @CoriBush. Or did you? https://t.co/ABNEJFUeC9

This is the kind of racist filth that Biden normalized on the left with his disgusting claim that the millions of Black Republicans in America "ain't Black." https://t.co/ebWNzpg9TM

FWIW not every black person in America is obligated to agree with you. Thank you for demonstrating your shallow, stompy footed immaturity. https://t.co/IIpWOtkK1H

Black leaders who do the bidding of @PPFA are the last people who should be talking about being a “prop” or perpetuating “white supremacy”, especially when they push the notion that it’s better for a baby to be killed in utero than born to a poor, black mother. https://t.co/RpSzTq45tA

She’s attacking him specifically on account of his skin color. Apparently all blacks are obliged to think like her. Which is actually helpful as it’s the latest bit of evidence that progressives care not about black empowerment but power for themselves.

James Lindsay tweeted that this is just how Critical Race Theory plays out:

Critical Race Theory, n.: Calling everything you want to control "racist" until you control it. https://t.co/eAHYjfUS2d

We're not here to support the candidacy of @ByronDonalds or anyone else. What we're here to support is the idea that black people can believe whatever it is they believe without being subjected to the racist defamation of "perpetuating white supremacy." https://t.co/wjXQ0UPXv3

Cori Bush be like: "The only true black people are the ones who agree with me."

You're a massive racist and should be kicked out of the house or at the very least off of all of your committees. https://t.co/JCB7UvnySn pic.twitter.com/3ABi8WwEg6

Super shocked Cori Bush turned the speaker vote into racism. Just not like her. https://t.co/ddY442FCQ1

FWIW, nobody asked @CoriBush her opinion on the matter. Before you judge my agenda, let's have a debate over the policies and the outcomes. Until then, don't be a crab in a barrel! https://t.co/QF2OubL4mO

.@CoriBush, if you see a Black man rise, let the man rise even if you disagree with them.

I’d be happy to sit down and debate our policies one on one whenever you’d like.

As a Black man to a Black woman, I’d never do that to you. It’s a shame you did it to me. pic.twitter.com/ojpEHLhSI4

Rep. Cori Bush’s overt bias against minority conservatives is absolutely shameful — unfortunately, it doesn’t appear that the woman is capable of shame.

There are far better role models out there than the bigot Cori Bush.