Sometimes, when men dressed as women are entering deliberately sex-segregated spaces, it isn’t about being “accepted” as a woman. It’s something else entirely.

A Japanese transgender-identified male YouTuber was boasting on his channel about sneaking into a women’s bathhouse and seeing women naked. He gushed about the wonders that he saw and used words like “marshmallows” and “peaches” to describe women’s body parts.

Nao Wasada, who also uses the name Suzanne Misaki, uploaded a video to his YouTube channel on December 5 titled “What Happened After a Former Man Took Off His Clothes and Entered the Women’s Bath.” In the vlog, Wasada describes his experience entering the women’s section of the bath house in highly sexualized terms.
As of January 4, the upload has over 2,300 ‘dislikes’ compared to only 290 ‘likes.’
“I snuck into a women’s bath where women in their natural appearance gathered together,” Wasada says in the video. “For a former man, a women’s bath is a dangerous place because it reveals the male body and if it is discovered that you are a former man, you are in all sorts of trouble.”
He went on to call the experience “paradise” and said he was in “boob heaven,” and compared women’s bodies to marshmallows and peaches, using Japanese onomatopoeia to imitate the sound of jiggling. “It was really a 360-degree world full of tits and tight, peach-like buttocks,” Wasada said.
“I actually went to peachy boob heaven and worshipped marshmallow tits,” he added. “Everyone hides them with a towel, but they’re protruding, aren’t they? Heaven. There are big peaches and small ones. There are peaches, and there are women whose buttocks stick out like pears.”
Source: Reduxx Magazine

Wasada continued to detail his experience on Instagram, and although the translation is clunky, you can still get the gist of what he’s saying — he wonders if he’ll be “lustful” like when going into a mens’ bath… and then he writes about the boobs he’s looked at. He even implies here that he’s thrilled that his “modest” moobs have granted him access to women’s spaces. 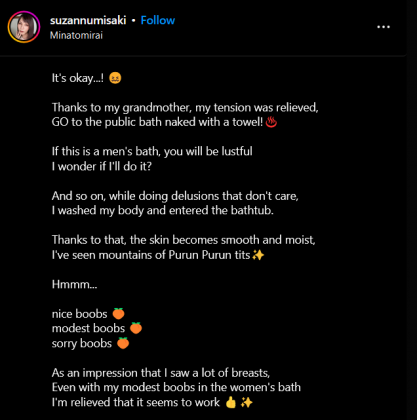 In a December 4 Instagram post, Wasada indicated that this wasn’t his first trip to a public bathhouse. In the post, he continued to make sexualized comments and compared seeing so many breasts to a buffet — “all-you-can-fill boobs while your heart is pounding.”

While public bathing isn’t really a thing in North America, it is something that is quite common in Japan and has been for hundreds of years.

Japanese bathhouses, “sentos”, were originally used when people didn’t have bathrooms in their homes but are still used today by many who enjoy the large tubs to soak in after a long day. As strange as it may seem to us, sentos are also places where people meet up to socialize.

According to Natasha Alden on her travel blog, “Bathing suits are not allowed in sentos. It is customary to be fully naked inside the bathhouse.” She adds, “This has been a cultural norm for hundreds of years, and the Japanese are used to bathing naked, amongst others.”

Still, the sentos are segregated by sex, not “gender identity” (though this is changing) and Wasada going into the women’s section as a man is still a no-no in most places.

And there’s a reason for this — to allow people to feel comfortable and not worry about being ogled while they’re naked.

Wasada was blasted in the comments section on his video. The top comments were the ones that had a negative view of his actions and condemned him for it. Some noted that Wasada’s apparent desire to ogle women’s breasts is more typical of male behavior than female behavior.

“If you’re a woman at heart, don’t you understand that if you say things like this to a woman, it’s scary and disgusting?” reads one of the top comments, “I’m not discriminatory and I’ve participated in the Pride parade in the past, but when I saw this video, I honestly thought it was really disgusting. LGBT+ just lost its supporters.”

“[This is] a person you don’t want your wife or daughter to encounter in a hot spring or toilet,” wrote another person.

Another commenter wrote that Wasada is “a man who is fascinated by women’s bodies and has changed his body beyond his hobby of cross-dressing.”

A Japanese news outlet reported on Wasada’s video and invited an attorney to discuss the legal ramifications of Wasada entering a female-only space as a male.

After the public outcry, Wasada posted another video and it lacked any hint of contrition.

Japanese news outlets reported on Wasada’s video, and a lawyer spoke with Yahoo News about the incident. When questioned about the legality of the situation, attorney Ayao Masaki, a member of the Tokyo Bar Association, stated that it could present a “legal issue,” and cited laws related to trespassing with a voyeuristic intent and public exposure.
Following the public outcry, Wasada uploaded a video on December 20 responding to critics. Rather than apologizing for his behavior, Wasada instead claimed that the video was intended for male viewers, referred to himself as a “pervert”, and stated that he could not promise he would refrain from making similar comments about women in the future.
Source: Reduxx Magazine (Emphasis added)

Wasada appears to have an obsession with boobs. He posts about them frequently on social media. In June 2021, he posted on Twitter, “I love girls, I love boobs” and seems to indicate that men can “pass” as women if they work at it. 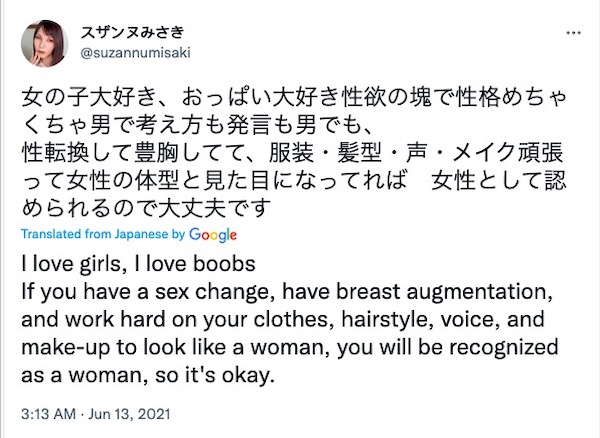 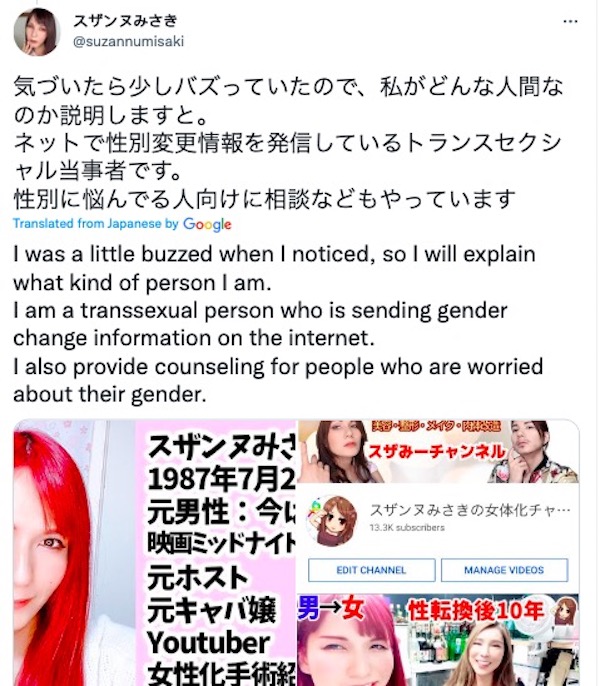 Gender ideology appears to now be colliding with Japan’s centuries-long tradition of public bathing and creating legal confusion. While the areas are presumed to be segregated based on sex, the introduction of legal document revision means that males like Wasada who change their gender marker to “female” are technically able to access the facilities.
The Japanese government currently requires “sex-reassignment surgery” in order for individuals to alter sex markers on official documents, though activists are pushing for reforms which would allow for self-identification on the basis of a subjective gender identity with no medical transition.
Source: Reduxx Magazine

On a completely unrelated note…

Helen Joyce spent 17 years as a staff writer and editor at The Economist. She is also a feminist activist and the author of “Trans: When Ideology Meets Reality,” a book about transgender activism. Joyce recently appeared on the Triggernometry Podcast.

In a segment currently going viral, Joyce said that for a number of men who “transition” into women later in life, crossdressing and living their lives as women is essentially a sexual fetish.

Director of Advocacy at Sex Matters and author @HJoyceGender .

So, according to Joyce’s research, there is, apparently, at least some segment of the dudes that want to go into women’s private spaces that are doing so because it’s a kink that they have, and a lynchpin part of that kink is to have everyone go along with their fantasy.

It’s almost like all the women saying that we need to keep sex-segregated spaces in order to keep voyeuristic creeps from getting their rocks off by seeing women in various states of undress were right all this time.