Snowden was interrupted again by another buzzing sound of electricity and a light plume of smoke rising from an unknown area below the camera frame. The deep America voice then reiterated, “But you’re only talking about the NSA, Mr. Snowden. Now, please, be honest: has there ever been any program of any agency of the U.S. government that could, has, or will do the awful things you alleged? Be truthful now, Mr. Snowden. Your country is counting on you, as well as your family and that pretty little girlfriend of yours…”

In the grainy video Snowden makes an attempt to respond, but instead vomits on himself and just breaks down, crying uncontrollably, his dislodged eyeball wobbling all the way.

Back in Washington a confident White House Press Secretary Jay Carney declared the newest “Snowden interview” proof that the former NSA contractor was what the administration had suspected all along — just a disgruntled, narcissistic employee who, for whatever reason, had decided to lash out at the government with lies and earn his 15 minutes of fame. Said Carney to White House reporters, “It’s clear the video shows a calm, relaxed, resolved (Snowden), freely admitting to lying over the last weeks.”

“But the poor (expletive) is bleeding with only one eye and a (expletive) gun to his head!” shouted Fox News reporter Ed Henry to Carney. Replied Carney, “Our experts have looked at the video and cannot conclude what that object next to Mr. Snowden’s head is. And who is to say (Snowden) simply didn’t fall down some stairs or bump his head on the way to the interview? It could just be a bad makeup job, too. I think you’re reaching here, Ed, as Fox News often does.”

A press release from the office of NSA Chief General Keith Alexander agreed with Carney’s assessment, saying Gen. Alexander and other intelligence officials who testified before Congress last week about the PRISM program had it confused with other massive domestic spy programs in nations like Iran and Russia. “We must have been confused. We thought we were being questioned about other nations,” read Gen. Alexander’s statement. “That PRISON-thing or whatever it’s called is used in other countries, but not ours. We were confused about that. … Our intelligence gathering methods in no way infringe on the privacy of innocent civilians or violate the U.S. Constitution, ever.”

Concluded Gen. Alexander in his press release, “… Now, can I have my wife and daughters back, please?”

Other U.S. intelligence operatives working with Russian authorities say that since Edward Snowden has now so willingly admitted he lied about the scope and invasiveness of the U.S. government’s surveillance techniques, no charges will be filed against him and he will be sent home to his girlfriend and family. An anonymous U.S. “intelligence agent” in Moscow told the UK Guardian that Mr. Snowden’s parents should expect to be reunited with their son within days, so long as they can agree on which piece of him they would like to be reunited with first.

{The preceding is satire.] 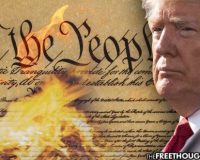 Constitutional Scholar Says Trump Is Carrying Out The Globalist Agenda
May 29th, 2020 Sons of Liberty Media 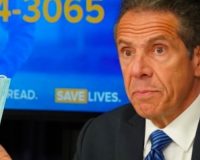 Looters Steal ‘TV’s & Groceries, Clothes’ After the Death of George Floyd In Minnesota (Watch)
May 28th, 2020 Flag And Cross