The National Security Agency paid millions of dollars to cover the costs of major internet companies involved in the Prism surveillance program after a court ruled that some of the agency’s activities were unconstitutional, according to top-secret material passed to the Guardian.

The technology companies, which the NSA says includes Google, Yahoo, Microsoft and Facebook, incurred the costs to meet new certification demands in the wake of the ruling from the Foreign Intelligence Surveillance (Fisa) court.

The October 2011 judgment, which was declassified on Wednesday by the Obama administration, found that the NSA’s inability to separate purely domestic communications from foreign traffic violated the fourth amendment.

While the ruling did not concern the Prism program directly, documents passed to the Guardian by whistleblower Edward Snowden describe the problems the decision created for the agency and the efforts required to bring operations into compliance. The material provides the first evidence of a financial relationship between the tech companies and the NSA.

The intelligence agency requires the Fisa court to sign annual “certifications” that provide the legal framework for surveillance operations. But in the wake of the court judgment these were only being renewed on a temporary basis while the agency worked on a solution to the processes that had been ruled illegal. 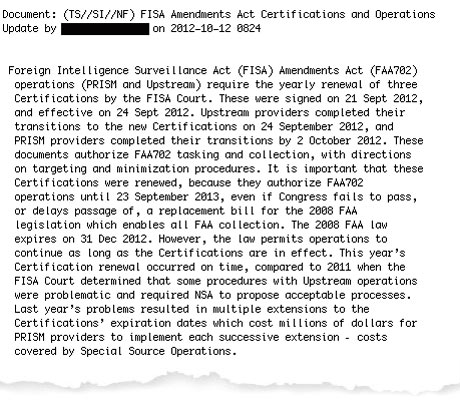 Special Source Operations, described by Snowden as the “crown jewel” of the NSA, handles all surveillance programs, such as Prism, that rely on “corporate partnerships” with telecoms and internet providers to access communications data.

The disclosure that taxpayers’ money was used to cover the companies’ compliance costs raises new questions over the relationship between Silicon Valley and the NSA. Since the existence of the program was first revealed by the Guardian and the Washington Post on June 6, the companies have repeatedly denied all knowledge of it and insisted they only hand over user data in response to specific legal requests from the authorities.

They Didn’t Even Give Joe Biden One Day Before They Started Rioting… (Video)
January 21st, 2021 Sons of Liberty Media

CRITICAL RACE THEORY: How This Guy Is Leading The Fight Against It
January 21st, 2021 Clash Daily