While browsing the internet for new events and the opinions of peoples from around the world, I came across an observation reportedly posted in a Czech newspaper a couple of years back. It resounded a chord within me, and opened a door of realization that could almost be described as an “epiphany”. The article stated:

The danger to America is not Barack Obama, but a citizenry capable of entrusting a man like him with the Presidency. It will be far easier to limit and undo the follies of an Obama presidency than to restore the necessary common sense and good judgment to a depraved electorate willing to have such a man for their president. The problem is much deeper and far more serious than Mr. Obama, who …is a mere symptom of what ails America. Blaming the prince of the fools should not blind anyone to the vast confederacy of fools that made him their prince. The Republic can survive a Barack Obama, who is, after all, merely a fool. It is less likely to survive a multitude of fools such as those who made him their president.

By the reasoning of this article the cancer eating at the core of America’s soul is not Obama, it is by far bigger and scarier; it is the 51% of American minds that elected him as leader. In a recent poll, 71% of the people that voted for him stated that they regretted it. However, when asked whom they preferred over him and would vote for in 2016 if given the chance, they responded, “Hillary Clinton…”

Beyond a shadow of a doubt America is polarized. And this polarization, it would seem, cannot be undone through debate and reason, for such debates have been going on for centuries between what is commonly referred to as “good and evil.” For the most part, this division would appear to be primarily not between the “haves” and “have nots” as stereo typed by the Obama Administration. But rather, primarily between the religiously conservative and the Constitutionally patriotic vs. the morally reprobate and the socialists who desire “something for nothing” at the expense of others. Upon careful observation, it becomes quite clear that both cannot have their way.

Hence cometh, when necessary, civil wars, revolutions, and conflicts of all kinds and kindreds. It may be, and is, that there are more than one form of ethereal thought ( or religious and/or political dogma) as pertaining to the inseparable arenas of the religious and the political spectrums of society. When such is the case, conflict between the two is inescapable. Once each thought form has depleted its potential candidates for recruitment, and each has raised its flag of spiritual-political persuasion, the polarization of the masses is complete; and war would seem to be the inevitable next step. And it would most certainly appear that both the government and the people are preparing for it.

Matthew P. Dec is a Christian freelance writer who spends his free time reading and analyzing world and national events. His studies also include politics, religion, and the occult; of which he has written a soon to be released book entitled “Mysticism in Politics, Religion, and the Occult”.

When The Devil Sets The Narrative!
Sons of Liberty Media 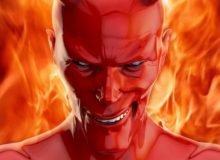 Cuomo crooning ‘Do you love me?’ to an aide may be the most disturbing thing you hear
August 4th, 2021 Liberty Unyielding