Hillary Clinton: Killing Jobs even WITHOUT being elected.

(P.S. If you were wondering… their workers weren’t unionized.)

Here’s a shot of the relevant paperwork: 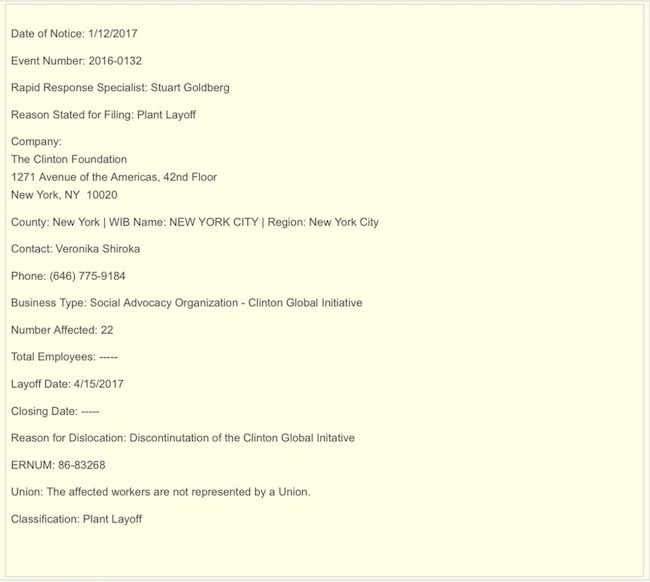 To which we say:

Oh dear. That must be very sad for you.

You are UNDER INVESTIGATION, you say…?

… being investigated for MONEY LAUNDERING??

(SHOCKER! Who would POSSIBLY have seen THAT coming?)

… And being investigated for ties to Islamic Terrorism too?

Money launderers who bragged on a secret federal wire tap that they could employ Clinton Foundation connections to funnel and cleanse millions in illicit cash have sparked a newly-minted FBI investigation into the embattled charity run by Hillary Clinton and her family, federal law enforcement officials confirm.

The money laundering allegations being probed by the FBI have been buoyed by recent revelations and evidence discovered by the NYPD from a laptop confiscated from Anthony Weiner and Huma Abedin’s Manhattan residence. According to NYPD, several of the emails recovered on the hard drive disclosed sensitive financial details of the Clintons and their charity. That evidence is now in the hands of the FBI too, whose New York field office has opened a parallel Clinton Foundation investigation.

Federal law enforcement sources said the Los Angeles-based money launderers, who are part of a separate federal investigation, discussed previously using Clinton Foundation personnel to domesticate foreign funds that could not be legally brought into the United States through traditional bank wires and deposits.

Federal agents said one U.S.-based company is owned by Bill Clinton and according to linked banking intelligence discovered in emails, that entity disbursed millions of dollars via wire transfers through global banks to additional accounts controlled by the Clinton family and its charity. NYPD intelligence sources versed in anti-money laundering, said the emails and other items obtained from Weiner’s laptop paint a portrait of a complex corporate umbrella strategically formulated to seemingly operate and avoid law-enforcement detection.

“There’s sophistication in how this works and distributes cash to other accounts,” a federal intelligence source said. “Do we think this involves gun-running or drug-dealing criminals? Not intentionally, but the infrastructure is set up almost identically. Proceeds and income are being hidden the same way.”

Has the Clinton Foundation and/or affiliates underwritten or profited from terror groups? It is distinctly possible it has conducted business with terror-backed financial concerns, federal agents said based on a cache of suspicious financial activity reports filed by institutions with the U.S. Treasury which flagged transactions with known terror-linked cartels, including Islamic factions. — Read more: TruePundit

With no influence left to sell, her wealthy friends have abandoned her.