President Trump’s statement in an interview that aired on the Christian Broadcasting Network has some Christian leaders VERY upset.

That’s because they’re not really listening to what’s being said.

Hello! Pay attention! This is important!

‘Fake news’ includes the way a story is framed and what details are left out.

This whole visa ban is being shaped a certain way to push a view of President Trump as xenophobic and ‘Islamophobic’.

At Clashdaily, we’ve got your back, and we’re here to help clarify things for you.

The Daily Mail has an article about Christian leaders that are outraged that President Trump wants to support persecuted Christians.

Christian leaders have spoken out against Donald Trump’s plan to prioritize Christian refugees, as the president confirmed his decision in an interview on the Christian Broadcasting Network.

The segment, which aired Sunday evening, was taped at the White House Friday, the same day Trump signed an executive order banning Syrian refugees indefinitely and closing US doors to visitors from seven predominantly Muslims countries.

During the interview, the president pledged to give priority to Christians applying for refugee status, saying it had been easier for Muslim people to get into the United States than for Christians. Available evidence, however, shows that the US admitted 37,521 Christian refugees and 38,901 Muslim refugees in 2016.

The interview question was about Syrian refugees that are Christian.

Those numbers are misleading, as they take into account all of the refugees that the US admits from everywhere in the world. 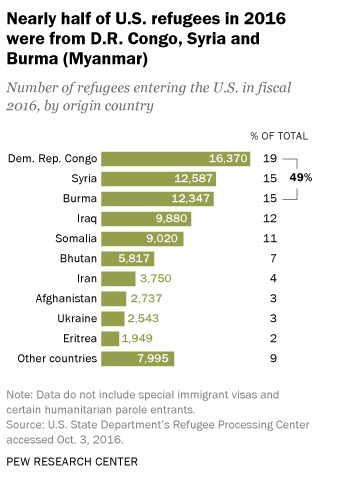 A report from the Center for Studies on New Religions has found that ‘Christians are the most persecuted religious group in the world with more than 90,000 killed in 2016 because of their faith’.

Open Doors, a non-profit organization that supports persecuted Christians worldwide, has said that the persecution of Christians in Syria is ‘extreme’.

President Trump’s statement was that he wants to prioritize the processing of Christian refugees from Syria because they are persecuted.

‘We have no evidence that would support a belief that the Obama administration was discriminating against Christian populations,’ Reverend Scott Arbeiter, the president of World Relief, the humanitarian branch of the National Association of Evangelicals, told the New York Times.

‘We believe in assisting all, regardless of their religious beliefs,’ Bishop Joe S Vásquez, who chairs the migration committee of the US Conference Of Catholic Bishops, told the newspaper.

One of the religious leaders speaking out against the executive order was Jen Smyers, the associate director for immigration and refugee policy of Church World Service, a ministry with more than 30 denominations in its members.

Smyers said that Friday, the day Trump signed the executive order setting up the immigration bans, was a ‘shameful day’ for the US.

‘Christ calls us to care for everyone, regardless of who they are and where they come from,’ World Relief’s senior vice president of advocacy and policy Jenny Yang told The Atlantic. ‘That has to be a core part of our witness—not just caring for our own, but caring for others as well.’

Did Christ call us to care for everyone? Yes, we are to love our neighbors.

But when one neighbor is killing another neighbor, who do we give priority to?

As for the ‘no evidence’ claim…

What about this Newsweek article from September 2016:

The headline for this column—The U.S. Bars Christian, Not Muslim, Refugees From Syria—will strike many readers as ridiculous.

The BBC says that 10 percent of all Syrians are Christian, which would mean 2.2 million Christians. It is quite obvious, and President Barack Obama and Secretary John Kerry have acknowledged it, that Middle Eastern Christians are an especially persecuted group…

…“This is de facto discrimination and a gross injustice,” Nina Shea, director of the Hudson Institute’s Center for Religious Freedom, told Fox News. Fox notes another theory: The United States takes refugee referrals from the U.N. refugee camps in Jordan, and there are no Christians there…

…when you have been running a refugee program for years, and you have accepted 10,612 Sunni refugees and 56 Christians, and it is obvious why and obvious how to fix it, and nothing is done to fix it—well, the results speak more loudly than speeches, laws, intentions or excuses. In effect, we make it almost impossible for Christian refugees to get here.
Read more: Newsweek

The reason the Christians weren’t in the refugee camps was because they faced persecution there.

So, the UN refers refugees from the Jordanian camps to the United States, but Christians flee those camps because they are persecuted. Therefore, no Christians are referred despite being a religious minority.

Republican Senator Tom Cotton has introduced legislation that would permit Christians and other religious minorities to apply for refugee status directly, bypassing the UN.

And if you ask me, bypassing the United Nations…

President Trump has attempted to clarify the visa ban in the Daily Mail article:

‘To be clear, this is not a Muslim ban, as the media is falsely reporting. This is not about religion – this is about terror and keeping our country safe,’ he said. ‘There are over 40 different countries worldwide that are majority Muslim that are not affected by this order.

‘We will again be issuing visas to all countries once we are sure we have reviewed and implemented the most secure policies over the next 90 days.’

He also placed part of the blame on his predecessor Barack Obama.

‘My policy is similar to what President Obama did in 2011 when he banned visas for refugees from Iraq for six months,’ Trump said of his own measure.

Christian leaders are upset that President Trump wants to prioritize Christian refugees because they are members of the most persecuted religion in the world.

What would they rather him do?

That is so messed up.