You’re SURE to command our respect dressed up as THAT! So VERY Classy!

If you want to be seen as MORE than a body part, why the hell are you dressed as one? 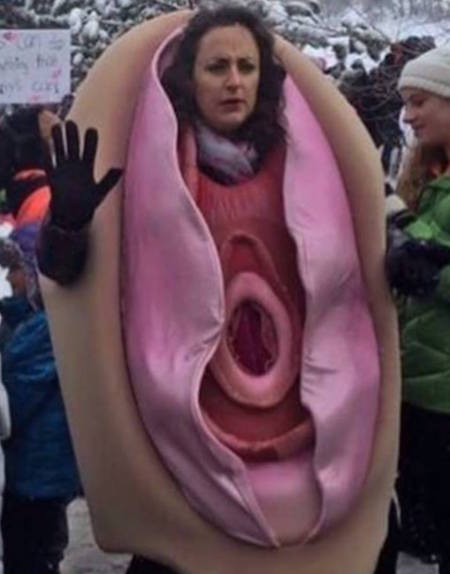 The women at the march were there to be heard. But not to say anything coherent. Here are excerpts from one female journalist’s reaction to it:

Her sign said; ‘I am more than my vagina’. I asked her why she was at the Women’s March on Washington. She said it was because she wanted to show what democracy really meant.

Another speaker, short on content but gushing with oestrogen shouted: ‘We are here’. (She was not wrong, we were). We will not be silenced. We will not play dead’.

Another speaker, short on content but gushing with oestrogen shouted: ‘We are here’. (She was not wrong, we were). We will not be silenced. We will not play dead’.

To be fair to Trump, I have not heard the silencing of females or women playing dead in his 100 day plan. Perhaps a more suitable venue for this speech would be outside the Saudi embassy, where the silencing of women is all the rage.

This was a march defined by gender, not purpose – much like Clinton’s campaign. And a march where the meaningless drivel of the speakers was matched by the lack of a clear aim of those marching.
No one would argue their hearts were not in it. I found myself smiling at their happiness in each other’s company, their relief to be together, reminding each other they are not alone.
But a shared sense of victimhood is not sufficient to make change happen. And at its most fundamental the unifying cause for these collected individuals is that they are not men.
They will not be silenced. That is clear. But they don’t know what it is they are shouting about. Anger is not enough.
Feminism has to be better than this. Better than posters telling me your vagina is tough. Or ‘this pussy grabs back’. So what? Mine can stash a 24 oz can of Coors Light. Sideways.

You’ve been played. Agitators who put politics above EVERYTHING — including self-respect or decency — sold you a bill of goods. You think you are standing for something in your vagina suit. You are merely making a spectacle of yourself.

The same people who insult Conservative women by calling them a ‘C-NT’ … try to make a ‘statement’ by dressing as one themselves.

The only thing you inspire in that getup is pity. Pity that you don’t have enough self-respect to let your IDEAS — rather than cheap theatrics — be what you are remembered for.

If early Feminists could see what was done with their legacy, do you REALLY think they’d cheer? Or would they blush?