Did you REALLY think President Trump would let his first day go to waste?

What did he do?

You know… the usual… 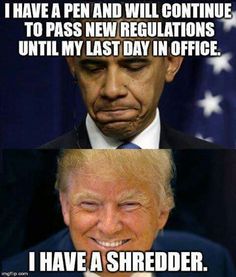 Took his place behind the Resolute Desk.

Seated behind the iconic Resolute Desk, made from the timbers of a British exploration ship in the late 19th century, Trump also signed the commissions for his first two Cabinet nominees to win Senate confirmation: Defense Secretary James Mattis and Homeland Security Secretary John Kelly. As is customary, other elements of the decor had changed, including the color of the drapes, from crimson to gold.

Signed an Executive Order that took the teeth out of Obamacare.

Trump’s executive order declares that “it is the policy of my Administration to seek the prompt repeal of the Patient Protection and Affordable Care Act” while taking steps now “to minimize the unwarranted economic and regulatory burdens.”

The order called for government agencies, “to the maximum extent permitted by law,” to “waive, defer, grant exemptions from, or delay the implementation of any provision or requirement of the Act that would impose a fiscal burden on any State or a cost, fee, tax, penalty, or regulatory burden on individuals, families, healthcare providers, health insurers, patients, recipients of healthcare services, purchasers of health insurance, or makers of medical devices, products, or medications.” — Read more: Yahoo

The White House website was updated to reflect the new priorities:

And in place of a page promoting the Obama administration’s Climate Action Plan was a page detailing Trump’s “America First Energy Plan,” which stresses Trump’s commitment to “eliminating harmful and unnecessary policies such as the Climate Action Plan.” — ABC

He called it a ‘beautiful day’.

You know… just a typical day at the office for someone used to getting results.

His REAL work starts on Monday.

Do you get the feeling THIS guy won’t be racking up some 300 rounds of golf while he’s in office?