So, THIS is ‘OK’, but the media (D) lost their minds over an offhanded Second Amendment reference?

This is taking reckless stupidity to a WHOLE other level.

We already have crackpots literally setting themselves on FIRE because their own media (and elected Democrats) are doing everything they can to thwart the ‘Peaceful Transition Of Power’ that as recently as OCTOBER was something they accused Republicans of not respecting.

Now they are grasping at…

…to somehow, someway avert what for this ‘dispassionate media’ is the ultimate Nightmare Scenario…

Not just the second-worst scenario, namely ‘Losing their grip on power.’

But one step worse than that, ‘being unable to bully the new guy’.

We remember his ‘objectivity’ from Election night. Twitter was joking about ‘Suicide Watch’ for him. 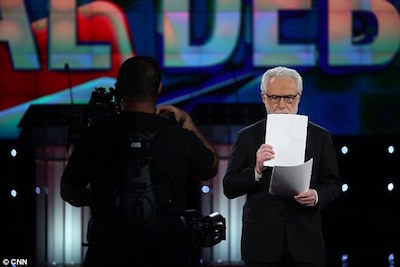 On the Wednesday, January 18 broadcast of CNN’s The Situation Room, host Wolf Blitzer aired a segment with a chyron featuring the headline “Developing Now.” During that “developing” segment, Blitzer and correspondent Brian Todd discussed what would happen if the unthinkable occurred on January 20.

Blitzer introduced the segment, saying, “What if an incoming president and his immediate successors were wiped out on day one?” and from there, CNN contributor Brian Todd took over to outline the line of succession if an attack blew up the inaugural dais, killing both Trump and Pence.

The ‘upshot’ was that in the case of both heads of state being killed, the Secretary of State would take over. Currently that man is Secretary of State John Kerry, But in case some objected because his office would also end as of noon on Inauguration Day, then it would be the Speaker of the House — Republican Paul Ryan — or even Obama’s Under Secretary for Political Affairs Tom Shannon.