‘Chelsea Manning’ has been a columnist for The Guardian for a few years. This article said something that President Trump just couldn’t ignore.

President Trump posted a Tweet reacting to an article written by ‘Chelsea Manning’ — formerly Bradley Manning — whose 35-year sentence was recently commuted as one of the last acts of President Obama.

Manning, a symbol for the Trans movement, was court-martialed, given a dishonorable discharge and was found guilty of multiple charges.

In Manning’s first article for The Guardian after the commuting of his sentence, the former soldier gave a rallying cry to Progressives and essentially called Obama a weak leader.

Barack Obama left behind hints of a progressive legacy. Unfortunately, despite his faith in our system and his positive track record on many issues over the last eight years, there have been very few permanent accomplishments.

This vulnerable legacy should remind us that what we really need is a strong and unapologetic progressive to lead us. What we need as well is a relentless grassroots movement to hold that leadership accountable….

…The one simple lesson to draw from President Obama’s legacy: do not start off with a compromise. They won’t meet you in the middle. Instead, what we need is an unapologetic progressive leader.

We need someone who is unafraid to be criticized, since you will inevitably be criticized. We need someone willing to face all of the vitriol, hatred and dogged determination of those opposed to us. Our opponents will not support us nor will they stop thwarting the march toward a just system that gives people a fighting chance to live. Our lives are at risk – especially for immigrants, Muslim people and black people.

This is where I would normally ask if Manning is delusional, but since he has ‘given up Manning and wants to try womaning‘, I’d say that’s pretty obvious. (That beautiful piece of wordsmithing in quotes is Andrew Klavan’s and not mine.)

Obama was an unapologetic Progressive.

But, keep your delusions if it makes you feel better.

President Trump’s reaction to the article: 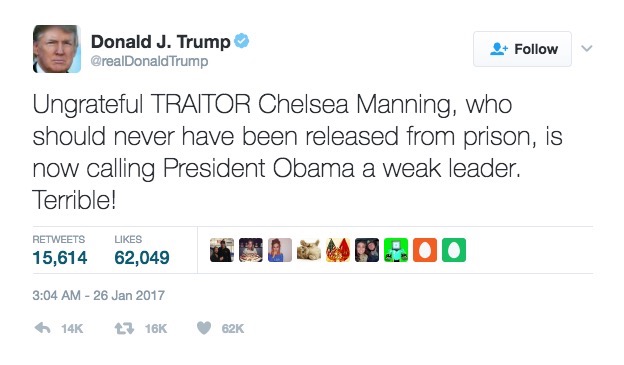 Manning, who went on a hunger strike to have ‘gender reassignment surgery’ and have the government foot the bill, released 700,000 documents to WikiLeaks and putting our troops at risk.

It was a traitorous act.

And somebody needed to call him on it. 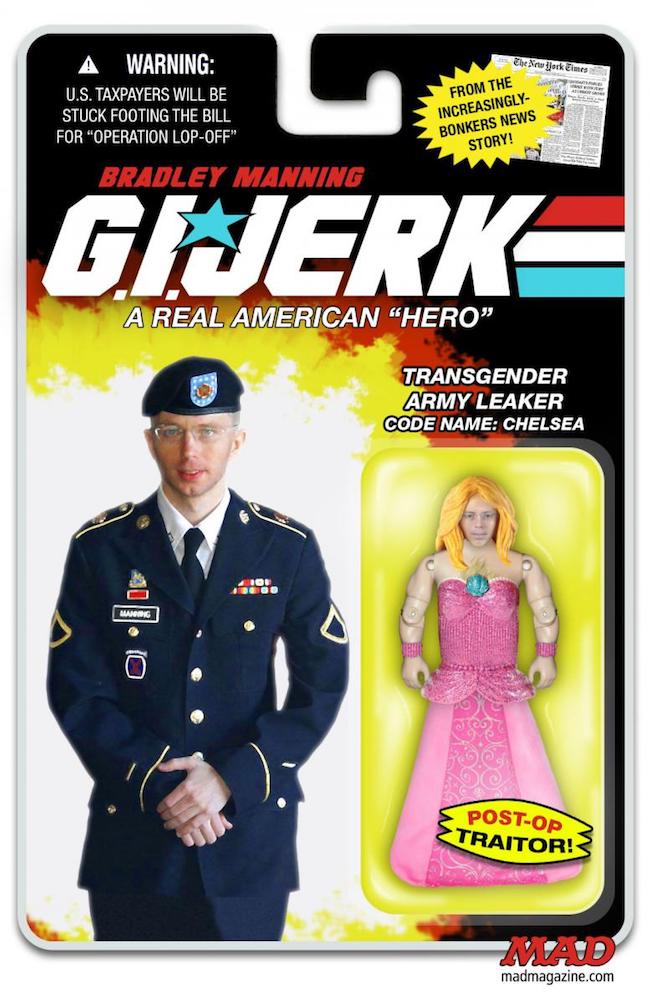 It’s really satisfying to see President Trump call out Manning as a Traitor.