Outgoing ‘POUTUS’ BHO took every opportunity to twist the knife and sabotage what he could on his way out the door.

Try to send a government MoneyGram to Palestine (against House Objections)? Check.

Wrap the government in red tape, and go on a Federal Hiring spree? Check.

There’s more, but you get the picture.

As it turns out, Obama is even MORE cynical than we had imagined. Not that it should surprise us after seeing how he has emboldened riotous protesters.

Who ELSE did he give your tax dollars to?

Let’s start by highlighting WHICH government department cut the check.

They cut a $400,000 check to a group with a very friendly-sounding Orwellian name.

Sounds so pleasant, so innocent. Right?

Their stated mission: “Life After Hate is dedicated to inspiring individuals to a place of compassion and forgiveness, for themselves and for all people.”

Their stated services: “Our core services stem from the foundation of our members’ reformed ideology and unique experiential immersion within the world’s most violent extremist organizations.”

This is an ‘anti-hate’ group. Wonderful, right? After seeing protesters trying to burn down Berkeley over a speaker they disagreed with we could certainly do with having a little less ‘hate’.

Here is what the co-founder is up to when he isn’t promoting “compassion” and “forgiveness”.

@POTUS And as rulers, our first order of business is to remove you from office before you destroy us. #notmypresident 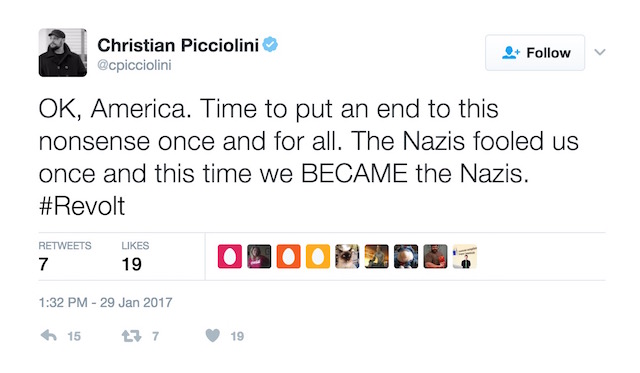 Sounds like he’s REALLY grateful to have been given that taxpayer money.

So that he can use his platform to overthrow the duly-elected President.

If he’s a registered charity, do we need to take a closer look on WHAT he’s spending his money on? And see if he’s using OUR money to undercut OUR system of government?

Obama LAUNCHED his bid for President from the Living Room of an ACTUAL Domestic Terrorist.

It’s hardly surprising that his last week in office would be spent propping up others like him.